Jane Eyre is the story of a young, orphaned girl (shockingly, she’s named Jane Eyre) who lives with her aunt and cousins, the Reeds, at Gateshead Hall. Like all nineteenth-century orphans, her situation pretty much sucks.

Mrs. Reed hates Jane and allows her son John to torment the girl. Even the servants are constantly reminding Jane that she’s poor and worthless. At the tender age of ten, Jane rises up against this treatment and tells them all exactly what she thinks of them. (We wish we could’ve been there to hear it!) She’s punished by being locked in "the red room," the bedroom where her uncle died, and she has a hysterical fit when she thinks his ghost is appearing. After this, nobody knows what to do with her, so they send her away to a religious boarding school for orphans—Lowood Institute.

At Lowood, which is run by the hypocritical ogre Mr. Brocklehurst, the students never have enough to eat or warm clothes. However, Jane finds a pious friend, Helen Burns, and a sympathetic teacher, Miss Temple. Under their influence, she becomes an excellent student, learning all the little bits and pieces of culture that made up a lady’s education in Victorian England: French, piano-playing, singing, and drawing.

Unfortunately, an epidemic of typhus breaks out at the school, and Helen dies—but of consumption, not typhus. (We always knew she’d be a martyr.) Jane remains at Lowood as a student until she’s sixteen, and then as a teacher until she’s eighteen. When Miss Temple leaves the school to get married, Jane gets a case of wanderlust and arranges to leave the school and become a governess.

The governess job that Jane accepts is to tutor a little French girl, Adèle Varens, at a country house called Thornfield. Jane goes there thinking that she’ll be working for a woman named Mrs. Fairfax, but Mrs. Fairfax is just the housekeeper; the owner of the house is the mysterious Mr. Rochester, and he's Adèle's guardian, although we’re not sure whether she’s his daughter. Jane likes Thornfield, although not the third floor, where a strange servant named Grace Poole works alone and Jane can hear eerie laughter coming from a locked room.

One evening when Jane’s out for a walk, she meets a mysterious man when his horse slips and he falls—of course, this is Mr. Rochester. Jane and Rochester are immediately interested in each other. She likes the fact that he’s craggy, dark, and rough-looking instead of smooth and classically handsome. She also likes his abrupt, almost rude manners, which she thinks are easier to handle than polite flattery. He likes her unusual strength and spirit and seems to find her almost unworldly; he’s always comparing her to a fairy or an elf or a sprite.

Rochester quickly learns that he can rely on Jane in a crisis—one evening, Jane finds Rochester asleep in his bed with the curtains and his bedclothes on fire, and she puts out the flames and rescues him. Jane and Rochester have fascinating conversations in the evenings and everything seems to be going really well… until Rochester invites a bunch of his rich friends to stay at Thornfield, including the beautiful Blanche Ingram. Rochester lets Blanche flirt with him constantly in front of Jane to make her jealous and encourages rumors that he’s engaged to Blanche. Don't worry, though—it's really only Jane he wants.

During the weeks-long house party, a man named Richard Mason shows up, and Rochester seems afraid of him. At night, Mason sneaks up to the third floor and somehow gets stabbed and bitten (ew). Rochester asks Jane to tend Richard Mason's wounds secretly while he fetches the doctor. The next morning before the guests find out what happened, Rochester sneaks Mason out of the house.

Before Jane can discover more about the mysterious situation, she gets a message that her Aunt Reed is very sick and is asking for her. Jane, forgiving Mrs. Reed for mistreating her when she was a child, goes back to take care of her dying aunt. When Jane returns to Thornfield, Blanche and her friends are gone, and Jane realizes how attached she is to Mr. Rochester. Although he lets her think for a little longer that he’s going to marry Blanche, eventually Rochester stops teasing Jane and proposes to her. She blissfully accepts.

Everything seems to be going great... until we notice that there’s still a third of the book left. That means something bad is about to happen.

It's the day of Jane and Rochester's wedding. It should be the happiest day of Jane's life, but during the church ceremony two men show up claiming that Rochester is already married. Dum dum dummm. Rochester admits that he is married to another woman, but tries to justify his attempt to marry Jane by taking them all to see his wife.

Mrs. Rochester is Bertha Mason, the "madwoman in the attic" who tried to burn Rochester to death in his bed, stabbed and bit her own brother (Richard Mason), and who’s been doing other creepy things at night. Rochester was tricked into marrying Bertha fifteen years ago in Jamaica by his father, who wanted him to marry for money and didn't tell him that insanity ran in Bertha’s family. Rochester tried to live with Bertha as husband and wife, but she was too horrible, so he locked her up at Thornfield with a nursemaid, Grace Poole.

Meanwhile, he traveled around Europe for ten years trying to forget Bertha and keeping various mistresses. Adèle Varens (Jane's student) is the daughter of one of these mistresses, though she may not be Rochester’s daughter. Eventually he got tired of this lifestyle, came home to England, and fell in love with Jane.

After explaining all this, Rochester claims that he’s not really married because his relationship with Bertha isn’t a real marriage. The main problem is that he can’t divorce her (because it was pretty tough to get a divorce at all in the Victorian period, and Bertha’s behavior isn’t grounds for a divorce, since she’s mentally ill and therefore not responsible for her actions). He wants Jane to go and live with him in France, where they can pretend to be a married couple and act like husband and wife. Jane refuses to be his next mistress and runs away before she’s tempted to agree.

Jane travels in a random direction away from Thornfield. Having no money, she almost starves to death before being taken in by the Rivers family, who live at Moor House near a town called Morton. The Rivers siblings—Diana, Mary, and St. John—are about Jane’s age and well-educated, but somewhat poor. They take whole-heartedly to Jane, who has taken the pseudonym "Jane Elliott" so that Mr. Rochester can’t find her. Jane wants to earn her keep, so St. John arranges for her to become the teacher in a village girls’ school.

When Jane’s uncle Mr. Eyre dies and leaves his fortune to his niece, it turns out that the Rivers siblings are actually Jane’s cousins, and she shares her inheritance with the other three. (Now she’s Jane Heir, hey-o.)

St. John, who is a super-intense clergyman, wants to be more than Jane’s cousin (back when that wasn't considered gross). He admires Jane’s work ethic and asks her to marry him (how un-romantic), learn Hindustani, and go with him to India on a long-term missionary trip. Jane is tempted because she thinks she’d be good at it and that it would be an interesting life. Still, she refuses because she knows she doesn’t love St. John. To top it off, St. John actually loves a different a girl named Rosamond Oliver, but he won’t let himself admit it because he thinks she would make a bad wife for a missionary.

Jane offers to go to India with him, but just as his cousin and co-worker, not as his wife. St. John won't give up and keeps pressuring Jane to marry him. Just as she’s about to give in, she supernaturally hears Mr. Rochester’s voice calling her name from somewhere far away.

The next morning, Jane leaves Moor House and goes back to Thornfield to find out what’s going on with Mr. Rochester. She finds out that Mr. Rochester searched for her everywhere and, when he couldn’t find her, sent everyone else away from the house and shut himself up alone. After this, Bertha set the house on fire one night and burned it to the ground. Rochester rescued all the servants and tried to save Bertha, too, but she committed suicide and he was injured. Now Rochester has lost an eye and a hand and is blind in the remaining eye.

Jane goes to Mr. Rochester and offers to take care of him as his nurse or housekeeper. What she really hopes is that he'll ask her to marry him—and he does. They have a quiet wedding, and after two years of marriage Rochester gradually gets his sight back. St. John Rivers, meanwhile, goes to India alone and works himself to death there over the course of several years. 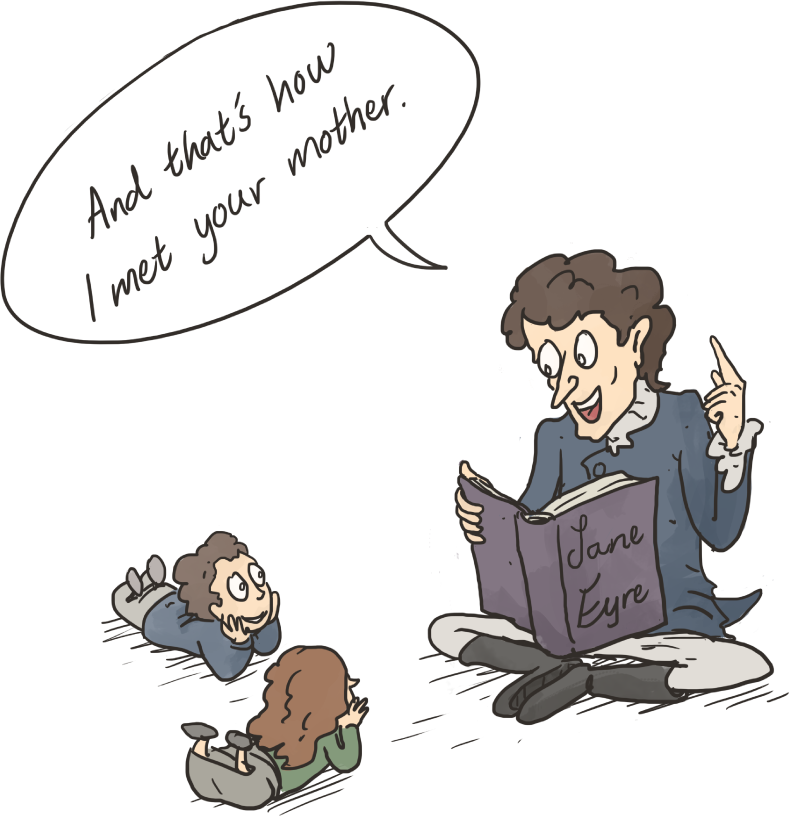