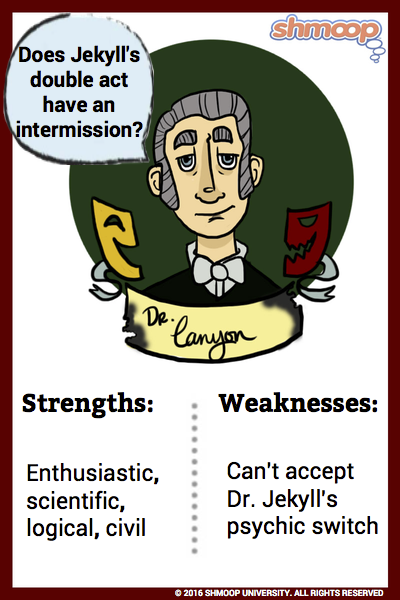 But he's also gentleman of equal social stature to Mr. Utterson and Dr. Jekyll—in fact, the three of them have been friends since childhood. He and Dr. Jekyll, however, had a massive scientific argument about ten years before the events of the book take place and their friendship is more civil than friendly. At one point Dr. Jekyll refers to Mr. Lanyon as "a hide-bound pedant" (3.3)—from which we can deduce that he’s more rational, scientific, and systematic than his former friend.

In fact, Lanyon has a thing or two to say on that subject:

"...[I]t is more than ten years since Henry Jekyll became too fanciful for me. He began to go wrong, wrong in mind; and though of course I continue to take an interest in him for old sake's sake, as they say, I see and I have seen devilish little of the man. Such unscientific balderdash," added the doctor, flushing suddenly purple, "would have estranged Damon and Pythias." (2.9)

So what’s up with his death? Well, having just said all that stuff about Lanyon being a man of science and a firm believer in logic, you can imagine it would be pretty shocking for such a gentleman to watch his best friend undergo a supernatural switcheroo from decent and God-fearing to evil-oozing. Such a sight would be difficult for Lanyon to believe. So, rather than believe it, he dies.