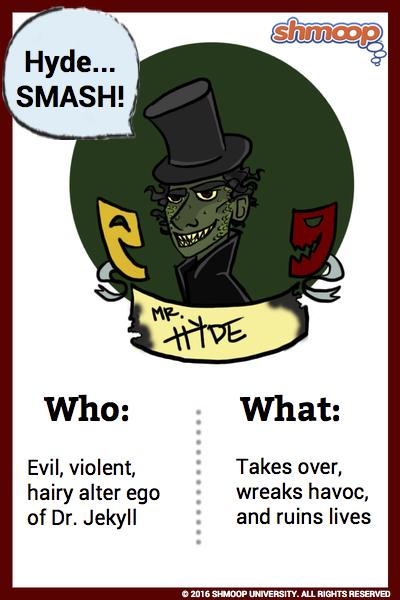 Not only do you not want to run into this guy in a dark alley—if you did, you might end up dead. This dude is no bueno. Combine the qualities of every criminal on Law And Order: SVU and put those villainous traits inside a body that looks like a thirty-year-old Steve Buscemi.

Mr. Hyde is Dr. Jekyll’s evil alter ego who indulges in various undisclosed vices. He’s smaller, younger, more energetic, and just basically a malevolent, villainous guy. He’s frequently compared to a monkey or an ape, suggesting a certain inhumanity or bestiality. And although no one can really pinpoint a particular deformity, they all agree that he has one—one that makes him a twisted, dark man who manages to inspire fear, disgust, and loathing even from afar. He is also described repeatedly as "timid yet bold."

He indulges in many undisclosed pleasures, but the main characteristic we see is that of violence. Mr. Hyde, to put it mildly, likes to beat people up. Based on the crimes we see, his predilection for violence isn’t like a gang member’s because he doesn’t hold any affiliations or have any conception of honor and respect. Nor is he really like a schoolyard bully because he’s not particularly bigger or stronger than the people he beats up—not to mention that he doesn’t do it in front of crowds or to make himself look good. No, he simply likes beating people up. He feels pleasure when he engages in violence:

He had in his hand a heavy cane, with which he was trifling; but he answered never a word, and seemed to listen with an ill-contained impatience. And then all of a sudden he broke out in a great flame of anger, stamping with his foot, brandishing the cane, and carrying on (as the maid described it) like a madman. The old gentleman took a step back, with the air of one very much surprised and a trifle hurt; and at that Mr. Hyde broke out of all bounds and clubbed him to the earth. And next moment, with ape-like fury, he was trampling his victim under foot and hailing down a storm of blows, under which the bones were audibly shattered and the body jumped upon the roadway. At the horror of these sights and sounds, the maid fainted. (4.1)

Mr. Hyde’s name is also significant, as he is both a persona that Dr. Jekyll hides behind and a hidden man:

Mr. Hyde had numbered few familiars—even the master of the servant maid had only seen him twice; his family could nowhere be traced; he had never been photographed; and the few who could describe him differed widely, as common observers will. Only on one point were they agreed; and that was the haunting sense of unexpressed deformity with which the fugitive impressed his beholders. (4.18)

Coming Out Of Hyde-ing

Perhaps the most interesting aspect of Mr. Hyde to discuss is his death. We aren’t really sure at the end how Mr. Hyde died. Well, suicide, you say—but who committed the suicide? We know that Hyde is afraid of death (and probably the Hell that, according to Victorian England, awaits him) and that the threat of suicide is Jekyll’s only weapon against him. So one would think Jekyll somehow killed himself and Hyde right after writing his confession. That’s the easy explanation.

Jekyll did say that Hyde was taking over and growing stronger. If the last thing Jekyll was able to pull off was writing his last "document," then it sounds like Hyde took over before the death occurred. So did Hyde kill himself? And does that mean he killed Jekyll? You could say that Jekyll was already dead by that time, and that Hyde had taken over completely. After all, it is Hyde’s dead body that we see, not Jekyll’s.

But you could also argue that it’s irrelevant to ask who killed himself, or who killed whom, because at the end of the day, Hyde and Jekyll aren’t separate entities. They share the same body and the same memory. You could even go so far as to say that Jekyll’s attempted division failed; man can’t be separated into two tidy halves.