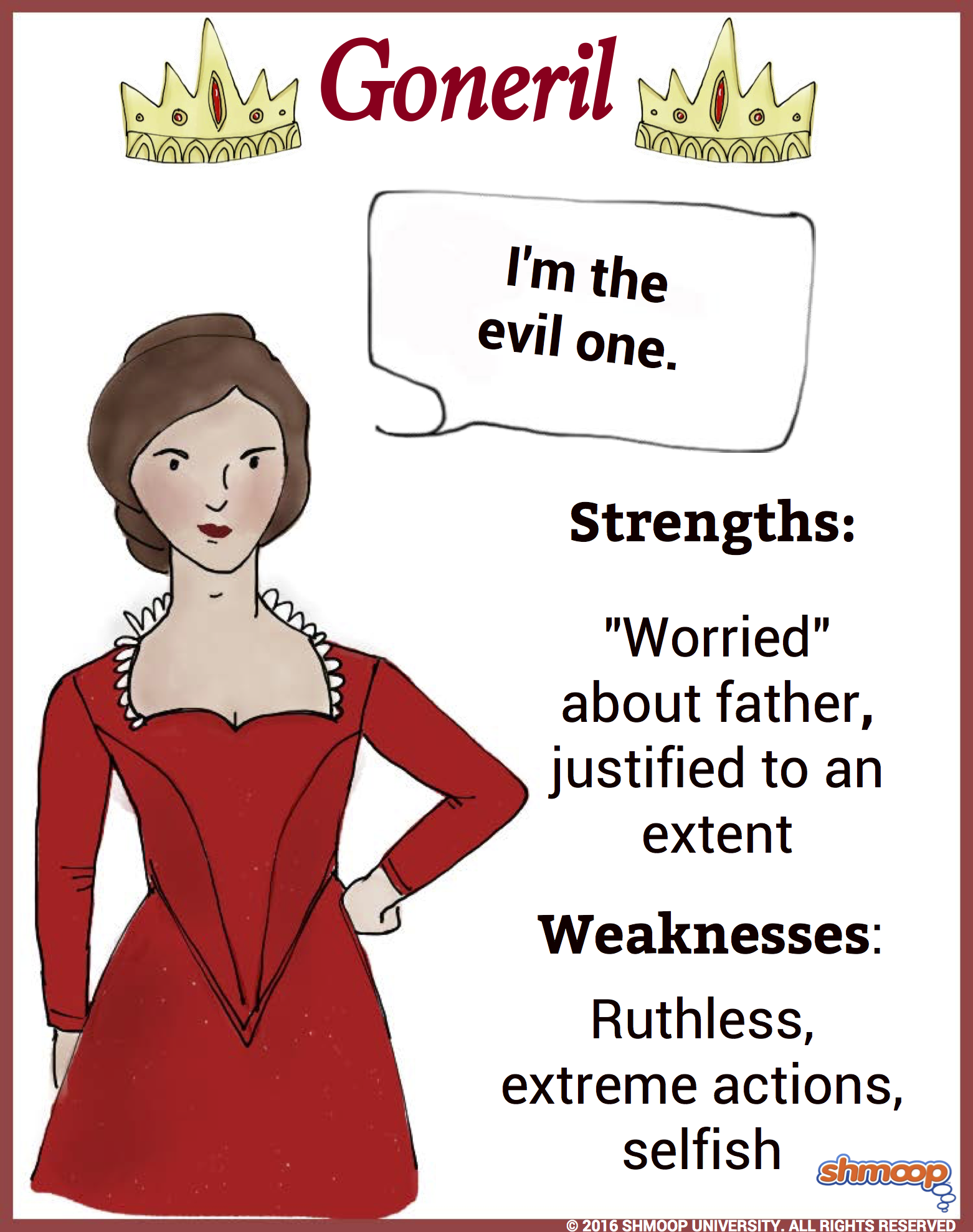 The Nasty Name Says It All

Goneril is one of Lear's wicked daughters. After Lear gives her half his lands, she promptly betrays him and doesn't shed a tear when Lear is forced to wander, homeless and exposed to the elements of nature. Yeah. She's a real nasty piece of work.

Because Goneril ends up doing such evil things—including poisoning her own sister over an evil philanderer—it's easy to just label her "the wicked daughter" and be done. But both Regan and Goneril are more complex than that, especially when you argue that they start out with good reason to be upset with Lear. Of course, they end up taking their feelings to an unforgivable extreme, but their initial reaction is worth exploring.

At the end of the first scene, Goneril and Regan aren't just cackling over how they're going to deal with their father; they're both legitimately worried about the King's irrational behavior.

Or Does It? (Probably, Yeah)

After Lear comes to live with Goneril, you could say that her complaints are totally justified. Think of Lear's knights as out of control party boys—breaking furniture and harassing Goneril's female servants. When Lear flips out at her for criticizing his entourage, it looks like he's the one being unreasonable, not Goneril. He prays to the gods that she won't be able to have children. Hey, that's just mean.

The next scene (Act 2, Scene 2) is the turning point. Regan and Goneril are ruthless in their attempt to get rid of their father's knights. They're trying to make him weak in comparison to them. Once they lock him out of the castle and hope that he, too, gets hit in the face by lightning, we're able to shift them into the category of cruelty. After that, there's cheating on her husband, plotting to murder her husband, and killing her sister. So there's a strange sense of justice in her suicide.

Speaking of suicide, let's check out Goneril's death. We've already established that she's a pretty awful person, so what would make her kill herself? It's a rather easy, cop-out answer to say that she feels guilty about poisoning Regan, but that's rather contrary to her character. A decent theory, we think, is to say that a) Albany is busy meting out justice, b) Edmund is dying, and c) everything is generally going to pot for the sisters. In all likelihood, Regan is going to have to face trial or possibly get murdered by a vengeance-crazed man. Goneril, being Goneril, would rather die than apologize, so she kills herself.