Previous Richard Parker Next The Hyena / The Cook 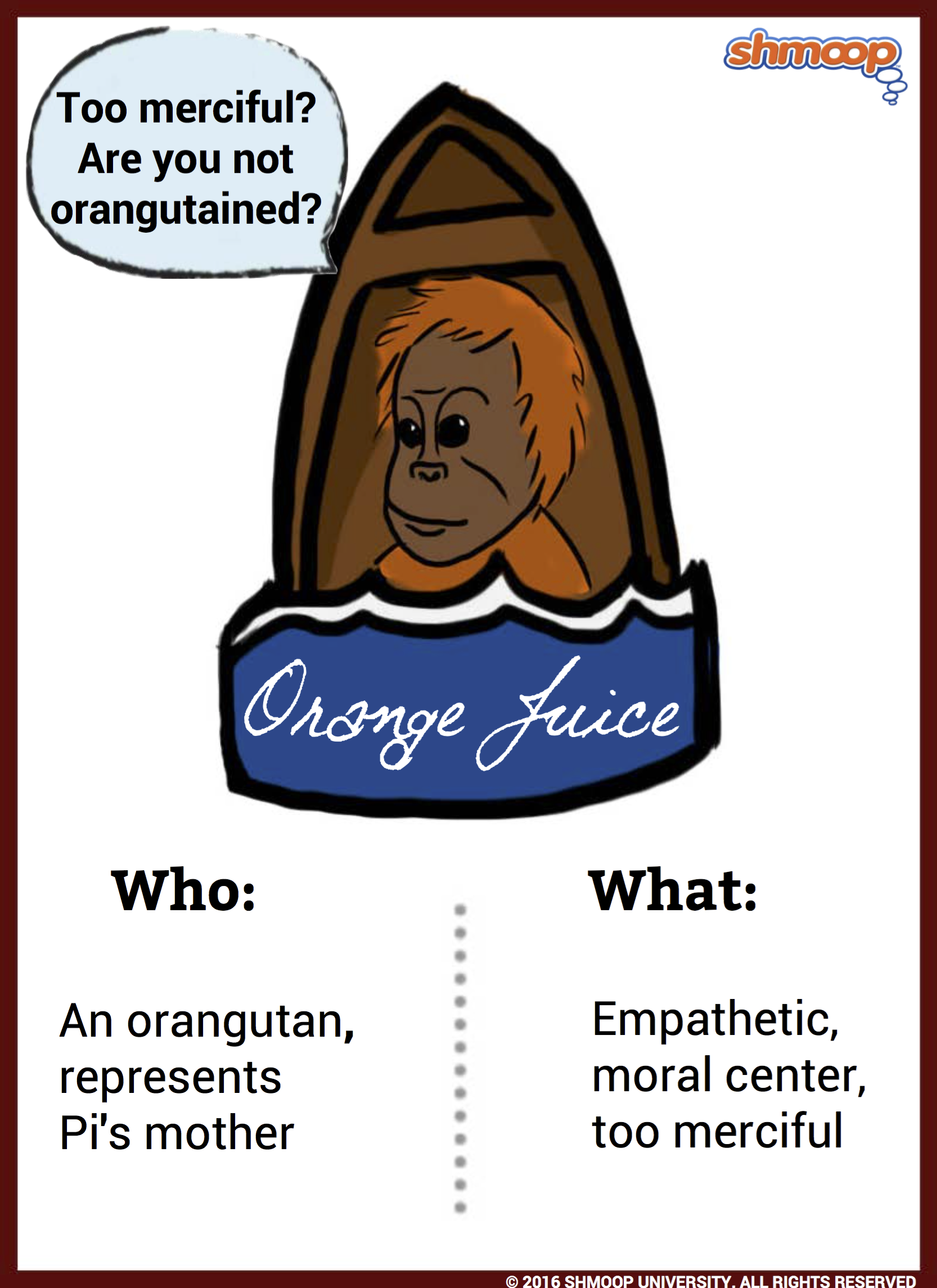 Pi's mother is named Gita, but she's mostly just referred to as "Mother." She's an incredibly warm and loving towards Pi: she's sympathetic when his father tries to teach him a lesson about the danger of animals, and she simply nudges Pi when the imam, priest, and pandit demand that Pi choose a religion.

Pi's mother also tactfully suggests other activities—ahem, literature—when Pi asks to purchase a prayer rug and get baptized. Although Pi worries her, she also defends him from his father. Pi's father, very enamored with the idea of progress, sees Pi's religious leanings as anti-Indian and anti-modern.

"Perhaps Piscine is marching to a different drumbeat of progress." (1.27.22)

In a touching moment, Pi's mother considers buying cigarettes before the family leaves the country. She doesn't even smoke. But Pi imagines the questions populating her mind:

"Yes, they have tobacco in Canada – but do they have Gold Flake cigarettes? Do they have Arun ice cream? Are the bicycles Heroes?" (1.35.4)

It's a reversal of sympathy: Pi's mother has continually sympathized with Pi, and now he imagines her sadness and homesickness. Later, in Pi's second (animal-less) story, she's the moral center of the lifeboat. She bravely attacks and criticizes the cook and, ultimately, pays for it. Her kindness and humanity – though admirable – perhaps inhibit her ability to survive. Martel suggests something is cruelly wrong with the world – or at least the world of the lifeboat – if this character dies because she is good.

Many of Pi's mother's traits appear in the character of Orange Juice the orangutan. In Part 2, Orange Juice floats up to the lifeboat bathed in the otherworldly glow of The Perfect Mother:

She came floating on an island of bananas in a halo of light, as lovely as the Virgin Mary. The rising sun was behind her. Her flaming hair looked stunning. (2.42.1)

Orange Juice certainly doesn't have the self-possession of Richard Parker. Nor does she have the cunning of Pi. She does bring warmth, radiance and an awareness of the tragedy that's just occurred, even if that awareness manifests itself only in shock.

When Pi peeks over the tarpaulin at Orange Juice, he notices she's seasick, like him. It's almost as if Orange Juice takes on the burden of their collective seasickness, and bears that load. This is not to say Orange Juice is simplistically kind. She does display courage and strength – and a certain amount of ferocity. She thumps the hyena on the head. Her fear, however – and the fact that she's outmatched – prevents her from killing the hyena. The hyena grabs a hold of her wrist and then her throat.

But Orange Juice functions as the kind, warm character caught up in the violence of the lifeboat. We think she's courageous but ultimately hampered by a lack of ruthlessness. She doesn't last long – and so reminds Pi that fear paralyzes and has to be avoided.

Previous Richard Parker Next The Hyena / The Cook
Navigation