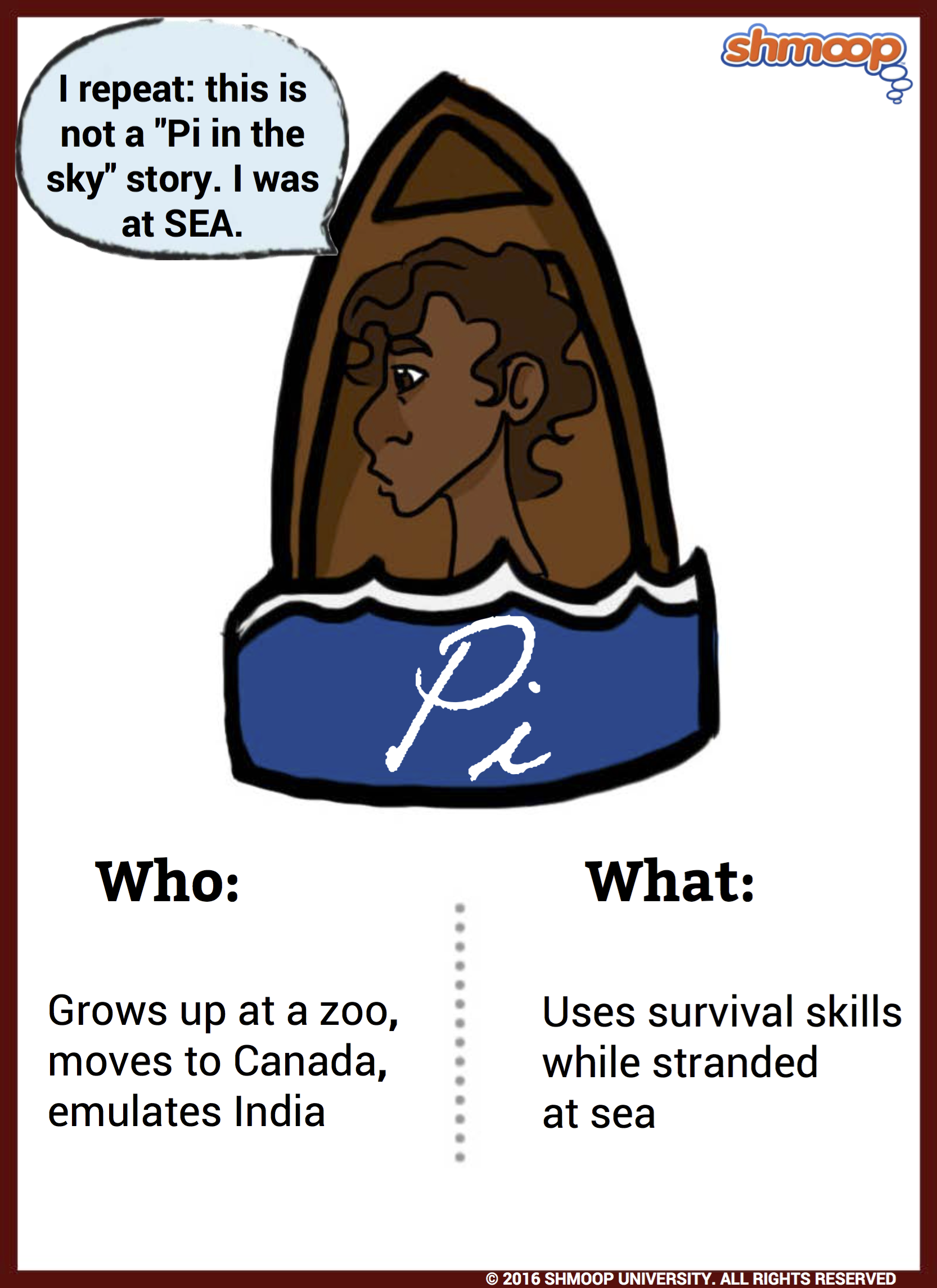 We want to state something upfront: Life of Pi isn't a character-driven book, and Martel doesn't devote the majority of his efforts to digging deep into the characters' minds. Sure, we can love Pi's humor and good nature, but these character traits also function as open doorways for Martel's ideas. In most philosophical novels, the character is more or less his ideas. This doesn't make the character any better or any worse—just a different literary creation.

Think of it this way: either ideas battle it out and deepen through a character, or the character deepens through his encounters with ideas, events, etc. We think Pi is of the first sort of character. Sure, he's smarter and wiser by the end of the book—and he does develop as a character—but we still think ideas are Martel's first priority. In talking about some of the major ideas Pi encounters and adopts, we'll hopefully clarify both the ideas themselves and, at the same time, essential parts of Pi's character.

This kid has one of the most magical childhoods ever—the guy gets to grow up surrounded by animals, thanks to his zookeeper dad. (Sure, he only gets to hold guinea pigs, but still: the life of a zookeeper's son is a nonstop animal party.)

He also grows up surrounded by a veritable mosaic of religious identities. And Pi—despite being mentored by an atheist Communist—delves into the world of comparative religion and spirituality with zest. By the time he sets sail, he's a Hindu, a Christian, and a Muslim. He doesn't see a conflict here: he revels in the teachings of all three religions and believes that the more he studies religion, the more enriched his life is.

Pi later studies Religion and Zoology at the University of Toronto, but we think that's a little redundant—the guy has obviously been studying these disciplines since he exited the womb.

So what ideas bump up against each other in Pi? An amazing assortment, but science, Hinduism, Christianity, and Islam probably take the top billing.

Pi is introduced to the wild world of science as he listens to Mr. Kumar the biologist expound on the order of the universe. Mr. Kumar, it should be noted, is a dyed-in-the-wool atheist who dismisses the ideal of religion and tells Pi to rely to science if he's ever in trouble.

"There are no grounds for going beyond a scientific explanation of reality and no sound reason for believing anything but our sense experience. A clear intellect, close attention to detail and a little scientific knowledge will expose religion as superstitious bosh. God does not exist." (1.7.12)

Pi doesn't buy this entirely, but—as is his approach to pretty much everything—he takes it to heart. He listens to Mr. Kumar's lessons on science, just as he internalizes the science of zookeeping.

And it's super lucky that he does this: all this becomes essential knowledge when Pi decides to train Richard Parker, and when Pi needs to take stock of his supplies and figure out just how he's going to continue living. Science and rationality become tools to manipulate the world around him—when he's on the lifeboat he's able to use his "sense experience" and, through "close attention to detail and a little scientific knowledge," he's able to survive the trip from the middle of the Pacific to the shores of Mexico.

But Pi doesn't just pick and choose the best things about Mr. Patel's atheism and devotion to science. He does this in terms of the other ideologies he adheres to.

Let's start with Pi's original religion: Hinduism. This is the religion that Pi's born into, and it's notable that he doesn't give it up even when he's introduced to the tenants of Christianity, Islam...or even the idea of atheism.

Here's a passage where Pi explains one of the central beliefs of Hinduism:

Brahman saguna is Brahman made manifest to our limited senses, Brahman expressed not only in gods but in humans, animals, trees, in a handful of earth, for everything has a trace of the divine in it. The truth of life is that Brahman is no different from atman, the spiritual force within us, what you might call the soul. [...]. The finite within the infinite, the infinite within the finite. (1.16.3)

We can see how Pi carries this idea of Brahman and atman being synonymous throughout the book. Consider the ways in which he admires the natural world even when he's stuck on a raft with a tiger. He sees the evidence of Brahman in the beauty of the sea and the flying fish, and even in being in proximity with a ferocious tiger. And what's more, he appreciates the impact that this "trace of the divine" has on his own atman, or his own soul. Pi's spirituality is grounded in the world—and we think we can thank his understanding of Hinduism for that.

One more word on Pi's Hinduism: check out his explanation of a story about Lord Krisna:

But we should not cling! A plague upon fundamentalists and literalists! I am reminded of a story of Lord Krishna when he was a cowherd. Every night he invites the milkmaids to dance with him in the forest. They come and they dance. The night is dark, the fire in their midst roars and crackles, the beat of the music gets ever faster – the girls dance and dance and dance with their sweet lord, who has made himself so abundant as to be in the arms of each and every girl. But the moment the girls become possessive, the moment each one imagines that Krishna is her partner alone, he vanishes. So it is that we should not be jealous with God. (1.16.5)

Not being jealous with God? Not being possessive when it comes to deities? It sounds like this story is one reason Pi allowed himself to pursue multiple spiritual paths—he understands the joy that comes with abundance.

But let's move on to Pi's second religion: Christianity.

Through one Father Martin, Pi converts to Christianity (although "conversion" might be the wrong term, since he doesn't leave Hinduism behind). He learns about Christ, and how he suffered and died out of love for mankind. Pi initially doesn't understand why a god would suffer. Don't mortals do that sort of thing? But the very questions he's asking lead him to the core of Christianity.

This son, on the other hand, who goes hungry, who suffers from thirst, who gets tired, who is sad, who is anxious, who is heckled and harassed, who has to put up with followers who don't get it and opponents who don't respect Him – what kind of god is that? It's a god on too human a scale, that's what. (1.17.27)

It's worth pointing out two things here. The first is that, in this quote Pi is drawing a connection between Hinduism and Christianity. Brahman (the divine) and atman (the soul) are undifferentiated in Hindi belief: there's a strong connection between god and humanity. And, through Christ's human suffering, Christianity seems to be making a similar connection.

The second thing to point out is how, through learning about Christianity, Pi is able to accept the idea of suffering. In the lifeboat, Pi takes solace in the fact that suffering can have a touch of the divine in it. Sure, Pi faces some low points in the lifeboat, but he also has a divine example to follow. Suffering becomes permissible—and that includes spiritual suffering:

If Christ played with doubt, so must we. If Christ spent an anguished night in prayer, if He burst out from the Cross, "My God, my God, why have you forsaken me?" then surely we are also permitted to doubt. But we must move on. To choose doubt as a philosophy of life is akin to choosing immobility as a means of transportation. (1.7.21)

Essentially, Pi's Christianity allows him both to suffer internally (be wracked with doubt, think that God has forsaken him) and then it pushes him to "move on."

Pi the Hindu and Muslim

But let's not forget about Pi's third religion: Islam.

"What's your religion about?" I asked.

His eyes lit up. "It is about the Beloved," he replied.

I challenge anyone to understand Islam, its spirit, and not to love it. It is a beautiful religion of brotherhood and devotion. (1.19.2-1.19.4)

We can see Pi's implementation of Islam when it comes to dealing with Richard Parker. Because Pi deeply loves the "brotherhood" and "devotion" that Islam preaches, he utilizes it when he deals with RP, who goes from being a threat to being a companion and perhaps even a friend. Yes, a boy and a tiger make a deeply odd couple—but hey: that's the point of brotherhood. It doesn't always have to look like a match made in heaven.

For more proof of this, look at this instance when Pi invokes the name of Allah:

"Praise be to Allah, Lord of All Worlds, the Compassionate, the Merciful, Ruler of Judgment Day!" I muttered. To Richard Parker I shouted, "Stop your trembling! This is miracle. This is an outbreak of divinity. This is...this is..." I could not find what it was, this thing so vast and fantastic. (2.85.6)

Here we have Pi not only reveling in the beauty of nature (a thunderstorm) but also telling Richard Parker to stop being afraid and to enjoy it as well. This is clear evidence of friendship and brotherhood: Pi's fear in this moment isn't so much that the tiger will attack him as it is that the tiger might miss out on the "outbreak of divinity" that is the tropical storm.

Aww. They really are bros.

But that's not the only lesson Pi takes from Islam. For Pi, Islam (like Christianity) reinforces the idea of Brahman and atman being interconnected. Check out this passage, which describes the intense spiritual happiness that Pi experiences after learning about Islam:

The image of the small circle coinciding with the center of a much larger one brings to mind the structure of a Venn diagram. We think that Pi's approach to spirituality is, in fact, a lot like a Venn diagram: the various religions he loves and practices converge on one point: Pi's atman.

So where does this merging of three religions (plus a love of science) ultimately leave our hero?

Well, for starters, it leaves him in Mexico.

And it also leaves him working as a megaphone for Martel's ideas about fiction and religion.  Part 3 of the novel is a philosophical dialogue in the spirit of Plato's Socratic dialogues. Though Mr. Okamoto and Mr. Chiba's doubt, Pi develops his ideas of fiction and faith. It's a complex moment in the book, where psychology, character development, and the philosophical concerns of Martel's work intersect in one blinding instant.

[Pi:] "So tell me, since it makes no factual difference to you and you can't prove the question either way, which story do you prefer? Which is the better story, the story with animals or the story without animals?"

Mr. Chiba: "The story with animals."

Mr. Okamoto: "Yes. The story with the animals is the better story."

But is this all smart maneuvering to deny the cowardice and bloodlust he displays in the second version of events? Or is Pi simply telling a more beautiful and more hopeful story through the inclusion of animals? Maybe, Martel is encouraging the reader to combine the two stories (much in the same way that Pi combines religion) to come up with something that's truthful both on a factual and spiritual level.

How you interpret this moment will affect your view of Pi as a character. In a way, Pi's a tabula rasa, a blank slate onto which the reader can project either a secular temperament or a faith-filled one. (Check out this interview with Martel for more on that subject.)

Ultimately, we're supposed to puzzle over Pi's question to the Japanese investigators: Which is the better story?