Richard Parker in Life of Pi 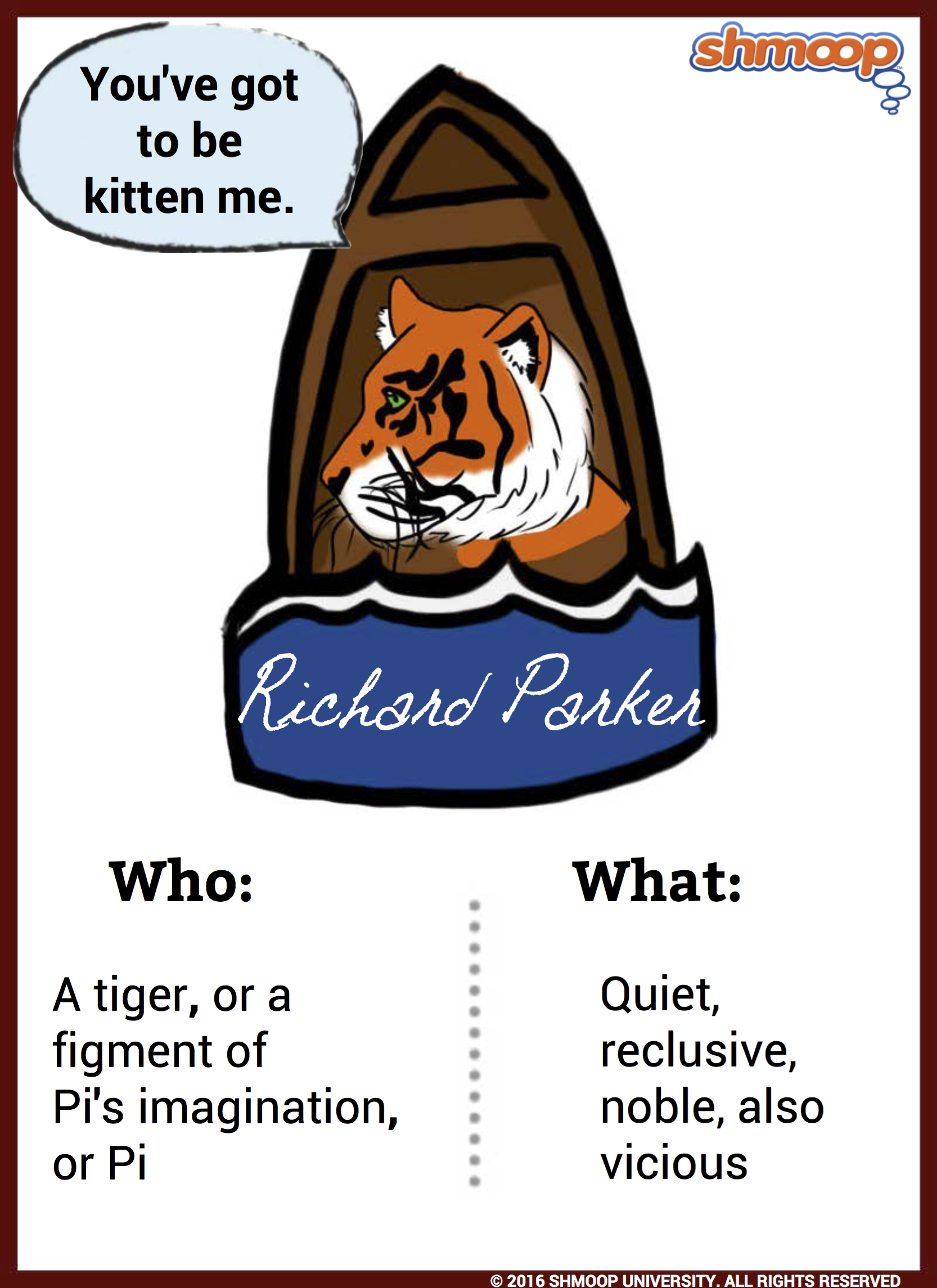 And if your brain melts trying to believe in both stories at the same time, we apologize.

Pi and Richard Parker are mashed together in more than one way in Life of Pi. Certainly the Japanese investigators say Pi is Richard Parker. But even before that, the two characters share something we'd like to call "the anxiety of naming."

Martel opens Part 2, Chapter 48 with the sentence: "Richard Parker was so named because of a clerical error." And if that sounds vaguely familiar—you're right. Didn't Pi also spend a long time discussing his own name? Wasn't he named after a swimming pool? And then, didn't he give himself his own shortened nickname?

It's probably no coincidence that Richard Parker was named strangely—and then renamed—as well.

Yep: even when you're simply analyzing names, it's more than possible to interpret Richard Parker as an extension of Pi's character.

But the similarities continue. As Pi's days on the lifeboat stretch into weeks and then months, the differences between man and tiger—even in Pi's possibly fictional retelling—start breaking down. The first un-tigerlike characteristic of Pi's to disappear is his vegetarianism:

You may be astonished that in such a short period of time I could go from weeping over the muffled killing of a flying fish to gleefully bludgeoning to death a dorado. [...] But in point of fact the explanation lies elsewhere. It is simple and brutal: a person can get used to anything, even killing. (2.61.32)

This passage can be read as something other than a former veggie lamenting the fact that he's been killing fish. It can also be read as a hint that it was Pi who killed the cook...rather than Richard Parker killing a hyena. The sentiment that "a person can get used to anything, even killing" should send a chill down your spine—people don't tend to get this introspective when it comes to laying the beatdown on some dorado.

But even if you choose to read this as an innocent former vegetarian regretting the lack of Garden Burgers on board the lifeboat, it still shows that Pi is drawing a parallel between him and Richard Parker. And those parallels don't stop:

It came as an unmistakable indication to me of how low I had sunk the day I noticed, with a pinching of the heart, that I ate like an animal, that this noisy, frantic unchewing wolfing-down of mine was exactly the way Richard Parker ate. (2.82.5)

This passage gives us a little insight into why Pi could have chosen to populate an alternative narrative with tigers and orangutans: he grows more and more animalistic as time on the lifeboat drags on. And it's not just that he's eating like an animal—he's also wasting away like one:

We perished away. It happened slowly, so that I didn't notice it all the time. But I noticed it regularly. We were two emaciated mammals, parched and starving. Richard Parker's fur lost its luster, and some of it even fell away from his shoulders and haunches. He lost a lot of weight, became a skeleton in an oversized bag of faded fur. I, too, withered away, the moistness sucked out of me, my bones showing plainly through my thin flesh. (2.89.2)

Something interesting to notice about this passage is the order in which the "emaciated mammals" on the lifeboat are described. The first pronoun used is the collective "we." This is followed by a long description on how Richard Parker's looking. (Notice, too, how the symptoms of starvation that RP is facing sound a whole lot like what humans go through: hair loss and weight loss.) Finally, a mention of Pi is tacked on at the end, almost as an afterthought. Pi only mentions that his symptoms are exactly the same as Richard Parkers: his skeleton is becoming visible through his flesh.

But don't think this analysis is easy. There's plenty of proof as well that Richard Parker is a wild tiger...and that Pi maintains his separate identity throughout the novel.

There are a few times when we're reminded of the fact that Richard Parker is a wild beast. Late in the book, he kills all those cute little meerkats. Pi catches Richard Parker sizing him up. We even see scenes of Richard Parker fighting a shark...and these scenes read exactly like a human boy watching a ferocious tiger—there's a measure of awe and fear:

Richard Parker turned and started clawing the shark's head with his free front paw and biting it with his jaws, while his rear legs began tearing at its stomach and back. [...]. Richard Parker's snarling was simply terrifying. (2.79.6)

But Pi isn't just terrified by RP—he also sees him as a source of enviable beauty. During the flying fish "plague." Pi watches fish jump aboard the lifeboat. As he unsuccessfully tries to collect them, he looks up to see Richard Parker eating with ease or even grace:

"Actually, it was not so much the speed that was impressive as the pure animal confidence, the total absorption in the moment. Such a mix of ease and concentration, such a being-in-the-present, would be the envy of the highest yogis" (2.61.19)

The important thing about these paragraphs—at least in terms of serving as evidence that Pi and Richard Parker are two very different critters—is the remove that Pi feels as he watches RP. He describes Richard Parker's body as distinctly feline, focusing on his "free front paw," "rear legs." Pi certainly sounds like he's describing a big cat.

He also describes Richard Parker as having a capacity he himself lacks: a "pure animal confidence" and a "total absorption in the moment." This certainly helps build the case that Richard Parker is, in fact, an entity totally distinct from Pi.

We're going to pull a Yann Martel and leave you with more questions than answers. What do you think? Is Richard Parker Pi's alter ego? Or has Pi really just had the dumb (bad) luck to be stuck in a lifeboat with a bloodthirsty Bengal tiger?