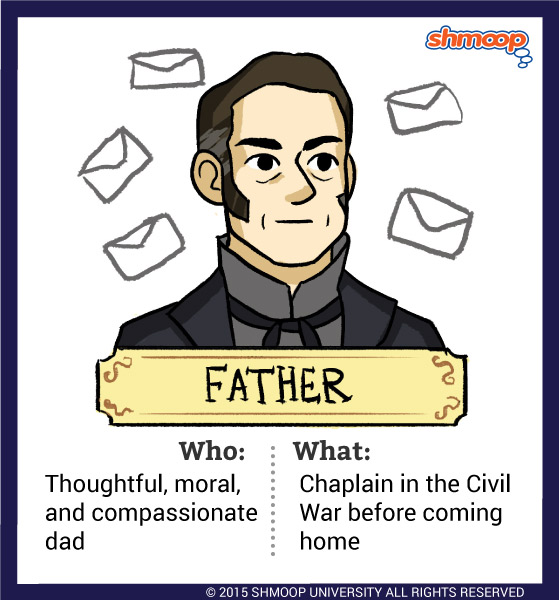 The March girls' father, like their mother, is essentially perfect. However, he's also absent, or silently in the background, for most of the novel. For the first half of the book, he's far away, serving as a chaplain in the Civil War. When he does come back, he proves to be a quiet, thoughtful man who busies himself with thinking about philosophical issues. Although he's a source of moral guidance for the family – and indeed for the whole community – he's still only a character sketch, the outline of a person instead of a fully-rounded individual.

To understand why Mr. March is such a vague character, we have to get a little biographical on you. If you're thinking that maybe Louisa May Alcott had father issues, well, you're absolutely right. Her own father, Bronson Alcott, was a Transcendentalist philosopher and unconventional thinker. He was overbearing and had frequent conflicts with his daughter Louisa. He also had a tendency to disrupt the family with his crazy projects – such as a communal living experiment called Fruitlands that he designed, where the Alcott family lived for a number of years in Louisa's childhood, until it failed. (You can read Alcott's satirical account of this experiment in her short story "Transcendental Wild Oats," which is a short, fun, and extremely weird read.)

The point is not that Bronson Alcott is the same as Mr. March – far from it. Instead, we like to think of Mr. March as the father that Louisa May Alcott wished she had, the father that she gives to her heroine Jo. The father Louisa wanted was also a philosopher, but more laid back, willing to let his wife and daughters take charge of some things. He's also compassionate toward Jo and always listens to her and her problems – unlike Bronson Alcott, who tended to tell Louisa exactly what was wrong with her!