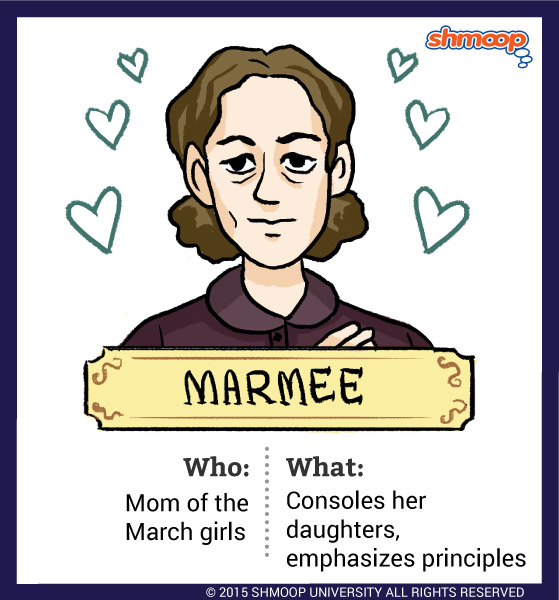 "Marmee" is the affectionate name that the March girls use for their mother, Mrs. March, whose real first name, like her eldest daughter, is Margaret. Mrs. March is essentially the perfect mother: she works hard but is never too busy to console and counsel her daughters; she cheerfully does charitable work and helps out with the war effort; she's an ideal housekeeper, a loving mother, and a highly principled woman. She never loses her temper, she never misses anything, and she protects her children while still allowing them to make mistakes and learn their own lessons.

Marmee is a bit of a mystery; we don't really know how she manages to have so much emotional strength, although Alcott suggests that her religious faith helps a lot. The only time that we really get a glimpse of the woman underneath the perfect mother is at the moment that Marmee reveals to Jo that she used to have a really bad temper. Of course, she has managed to cure herself of it almost completely, or at least to hide it so that she doesn't snap at people.

Marmee's perfection contrasts intriguingly with her unconventional beliefs. She doesn't encourage her daughters to marry for money, even though their family is poor. She believes that hard work, faith, and strong principles are the most important things in life. She believes that the poorest elements in society, such as the immigrant family the Hummels, are just as valuable as any other members of society. And she makes sure that all her daughters are educated and can make decisions for themselves, instead of marrying them off to men who will make those decisions for them. All of this may sound pretty typical to you, but trust us, for the nineteenth century, it's unbelievably progressive!