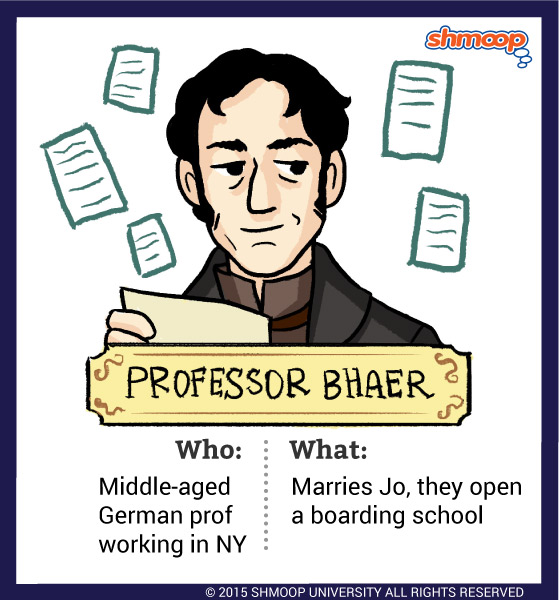 Professor Bhaer is an expatriate German professor working as a tutor in New York in order to support his orphaned, half-American nephews. Jo meets him while she is working as his landlady's governess at the boarding house, and quickly comes to respect his intellect and strong principles. Despite Mr. Bhaer's age (forty), his appearance (not handsome), and his table manners (appalling), Jo's respect gradually turns into love. After their marriage, Mr. Bhaer and Jo open a boarding school for boys, where they put together Jo's domestic and literary talents with Mr. Bhaer's knowledge of education.

Mr. Bhaer is a controversial character among readers who are looking for romance. On the one hand, he's old, unattractive, and a bit silly. On the other hand, his sexy accent, classical education, and love for Jo make him a bit more lovable. We'd just like to point out that Alcott herself described Mr. Bhaer in her novels as "a funny match" for Jo, so we're not sure how seriously we're really supposed to take him. His name alone – pronounced like a cross between "beer" and "bear," as Jo informs her family in a letter – seems designed to make us laugh.