Lord of the Flies Summary

Lord of the Flies Summary

Lord of the Flies was written by William Golding in 1954. When Lord of the Flies opens, a plane carrying a group of British boys ages 6 to 12 has crashed on a deserted island in the Pacific Ocean. Oops. (Also, apparently the world is at war. This matters.) With no adults around, the boys are left to fend for and govern themselves. Things start out okay. The boys use a conch shell as a talking stick, and Ralph, one of the older boys, becomes "chief."

And then trouble begins. They're afraid of a "beast" somewhere on the island, and then they decide to build a signal fire using the glasses of a boy named Piggy (who is a portly fellow, and also the most loyal friend to Ralph). But Jack, jealous of Ralph's power, decides the boys should devote their energies to hunting food (namely pigs) instead of maintaining the fire. The longer they're on the island, the more savage he becomes. Meanwhile, our other key player, a wise and philosophical boy named Simon, works with Ralph to build shelters.

Eventually, these latent conflicts become not so latent, and the boys who are supposed to be tending the fire skip out on their duties to kill a pig. The blood and gore of the hunt is all very exciting until they realize that, while they were out being bloodthirsty boys, the fire went out and a ship passed by without noticing them. Jack has also managed to punch Piggy in the face and break one lens of his glasses. Not good.

Right about this time a dead man attached to a parachute blows in Mary-Poppins-style to the island. The mysterious parachuting creature is mistaken for the beast, and the boys begin a massive hunt to kill it. Only Simon (and, let's face it, the audience) is skeptical, believing instead they're really just afraid of themselves. He goes off into the woods to contemplate the situation while Jack and Ralph ascend the mountain and find the beast—but don't stick around long enough to see that it is in fact only a dead man.

Back in the group, Jack decides Ralph shouldn't be chief anymore. He secedes and invites whoever wants to come with him and kill things (like more pigs, and maybe some people if they feel like it). Most of the older kids go with him, and Simon, hiding, watches Jack and Co. hunt a pig. This time, they slaughter a fat mother pig (in a scene described somewhat as a rape), cut off her head, and jam it onto a stick in the ground. Nice. 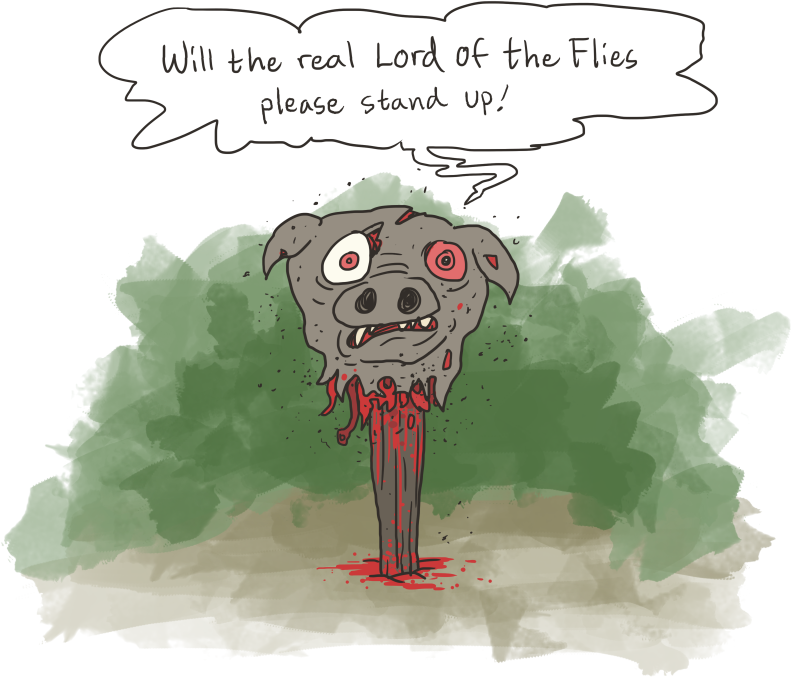 Simon stares at the head, which he calls "the Lord of the Flies" as it tells him (he's hallucinating, by the way) that it is the beast and that it is part of him (Simon). Simon passes out, gets a bloody nose, and wakes up covered in sweat, blood, and other generally disgusting things. Despite all this, he decides to continue up the mountain to face the beast, i.e. dead guy. Then he vomits and staggers down the mountain.

By now, Ralph and Piggy (both rather ravenous) are attending (with all the other boys) a big feast/party that Jack (decorated like an idol) is throwing. It's all a frenzied reenactment of the pig hunt until Simon, still bloody, sweaty, and covered in puke, stumbles down into the center of the crazed boys. He tries to tell them about the beast, but he is unrecognizable and the boys jab at him with their spears until he's dead. Oops. Simon's body is washed out to sea that night, and the wind carries off the body of the dead parachuting man, while Ralph and Piggy convince themselves they didn't take part in murdering Simon.

It's all downhill from here. Jack's crew attacks Ralph and Piggy and steals Piggy's eyeglasses to make fire on their own. When Ralph and Piggy decide to calmly talk it out with the "savages," Roger pushes a huge boulder off a cliff, killing Piggy. Ralph ends up running for his life, finds out that there's a head-on-stick future planned for him, and at last makes it to the shore of the island where he runs into… an officer of the British Navy. The boys are rescued from their mock war, but we're left with the image of the Navy's "trim cruiser" from the real war of the adults.

Previous Next
More on Lord of the Flies Navigation