Scotland and England in the 11th Century 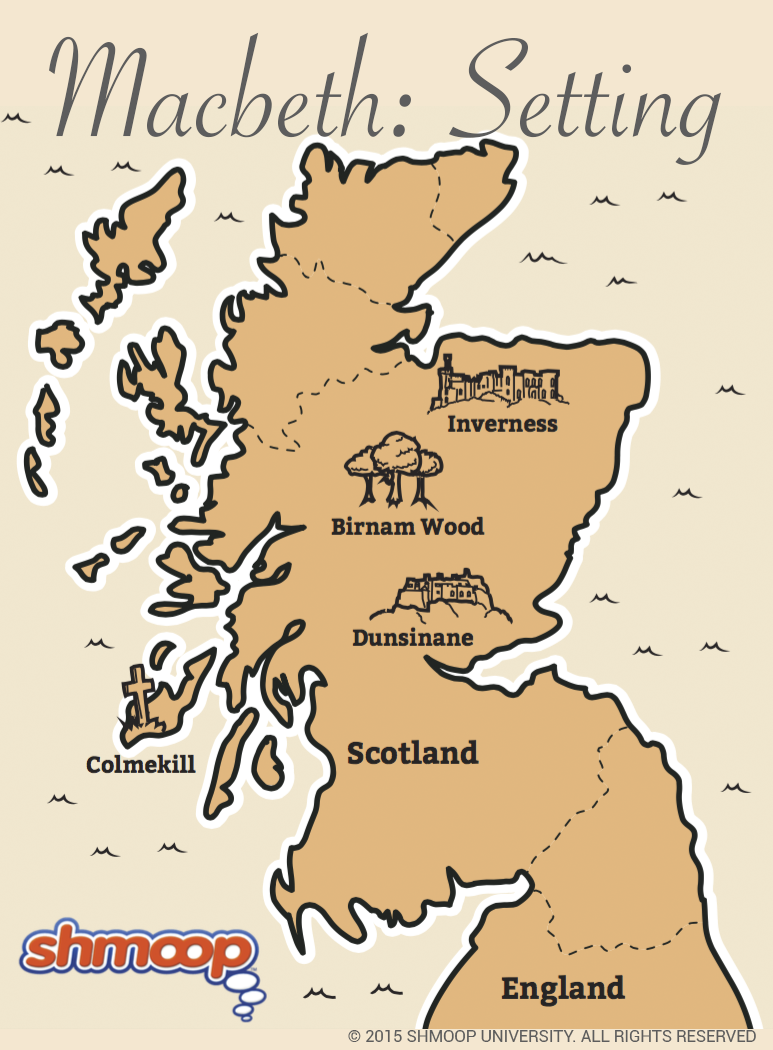 Get your popcorn: the play opens on a foggy heath amidst a terrible thunder storm, so you know you're in for a laugh-riot of a play.

Not. Macbeth is a dark, dreary play with a lot of dark, dreary action taking place under the cover of darkness, whether at Macbeth's first castle, Inverness, or later, at the palace in Dunsinane. Despite these set changes, Macbeth doesn't go into a lot of detail about it's setting—that's why, like a lot of Shakespeare plays, it can be adapted to pretty much any time period the director fancies. Gangsters in Australia? Been there. Soviet era? Done that.

Though the play is kind of set in the 11th century, based on Holinshed's Chronicles, Shakespeare isn't into historical accuracy. (Historical accuracy wouldn't be invented for another two hundred or so years.) So, the play is full of allusions to contemporary, 17th-century events, like the Gunpowder Plot of 1605 in Act II, Scene iii (see "Symbols: The Equivocator" for more on that, and to King James I (see "Symbols: Eight Kings" for our take on that.) Plus, the actors would have been dressed in 17th-century clothing.

There is one quirk we want to bring up: Macbeth is the only Shakespearean play that's set in Scotland. This likely has something to do with the fact that after Queen Elizabeth I died in 1603, King James VI of Scotland was crowned King James I of England, just a few years before the play was written. Since all plays were performed at the discretion of the monarch, Shakespeare had a major interest in stroking James' ego.

Other than having more "Macs" than an Apple store, though, is there anything peculiarly Scottish about this play?