Jessica in The Merchant of Venice 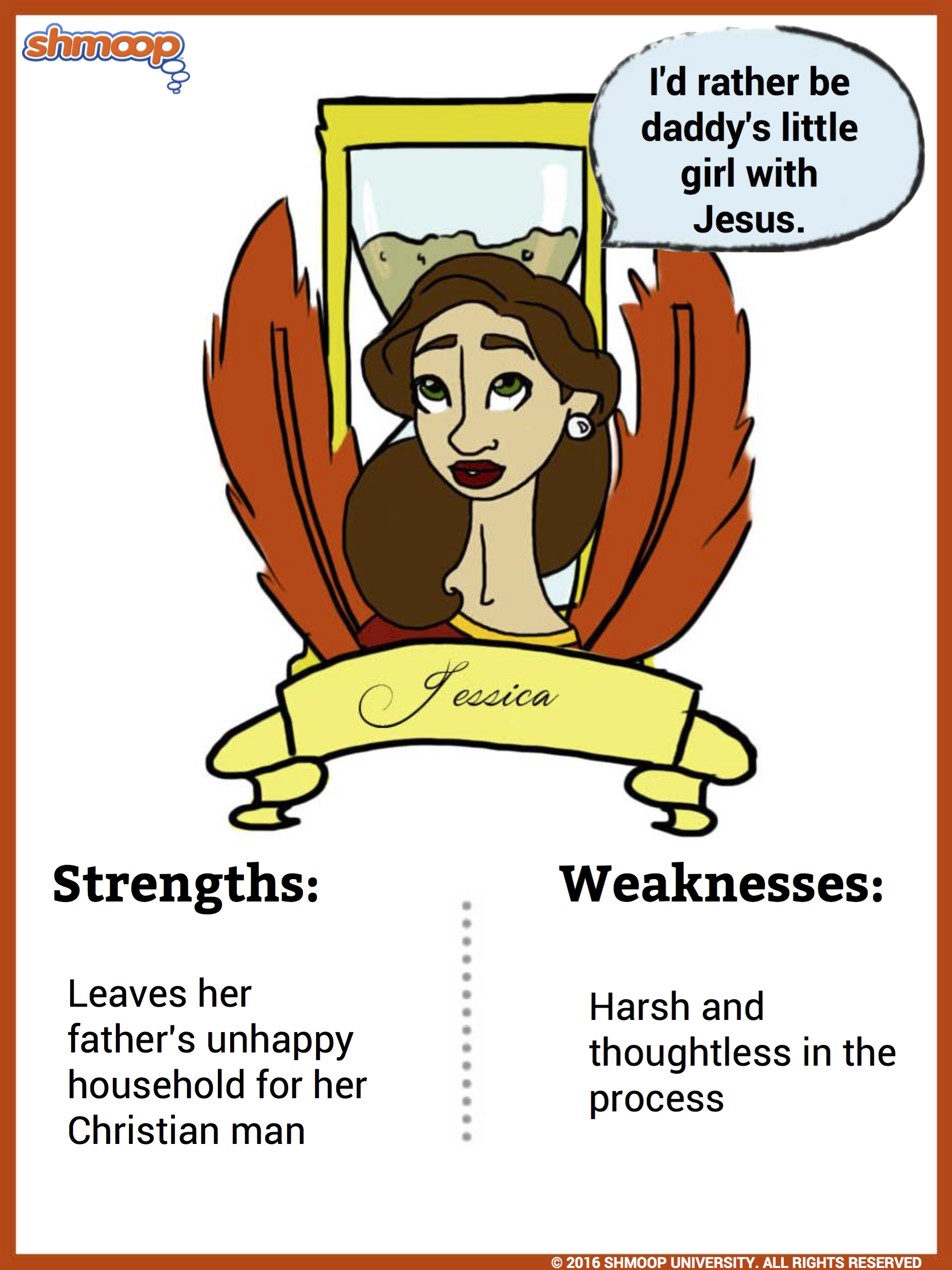 Jessica is Shylock's only daughter. She breaks her dad's heart by running off to marry a Christian (Lorenzo) and helps herself to her dad's ducats and some treasured family heirlooms.

Before we dismiss Jessica as a selfish jerk who steals from and abandons her dad, we should keep in mind that life at Shylock's house is not so great. It becomes even worse when their clown/servant Lancelot leaves: "I am sorry thou wilt leave my father so," Jessica says to Lancelot. "Our house is hell, and thou, a merry devil, / Didst rob it of some taste of tediousness" (2.3.1-3). Shakespeare gives us a little taste of life at Shylock's in Act 2, Scene 5: when Shylock and Jessica appear onstage together, Shylock barks orders at his daughter (while screaming at his servant). He demands that Jessica stay inside and "lock up [the] doors" so the sounds of music don't drift in from the streets (2.5.30).

Okay, we can understand why Jessica wants to get out of Dodge, and she's certainly not the only Shakespearean daughter to elope. But it does seem pretty cold when she trades her dead mother's turquoise ring for a monkey after running off with Lorenzo. Her thoughtlessness devastates her father:

Jessica not only runs away from her father's house, she also converts to Christianity... and both are portrayed as acts of abandonment. When Lancelot the clown says Jessica is "damned" to hell because she's the "Jew's daughter," Jessica declares "I shall be saved by my husband. He hath made me a Christian" (3.5.18-19). The idea here is that Jessica's marriage to a Christian man will automatically make her a Christian too. The concept comes from 1 Corinthians 7:14 in the New Testament: "The unbelieving wife is sanctified by the husband."

As literary critic Janet Adelman points out in Blood Relations, "marriage appears to occur to [Jessica] largely as a way to escape" being her father's daughter. You can see that in her speech in Act 2, Scene 3:

Alack, what heinous sin is it in me
To be ashamed to be my father's child?
But though I am a daughter to his blood,
I am not to his manners. O Lorenzo,
If thou keep promise, I shall end this strife,
Become a Christian and thy loving wife. (2.3.16-21)

Here it becomes clear that Jessica not only hates her father's rude "manners" but also associates Shylock's conduct and behavior with being Jewish, which is why she can't wait to "become a Christian."