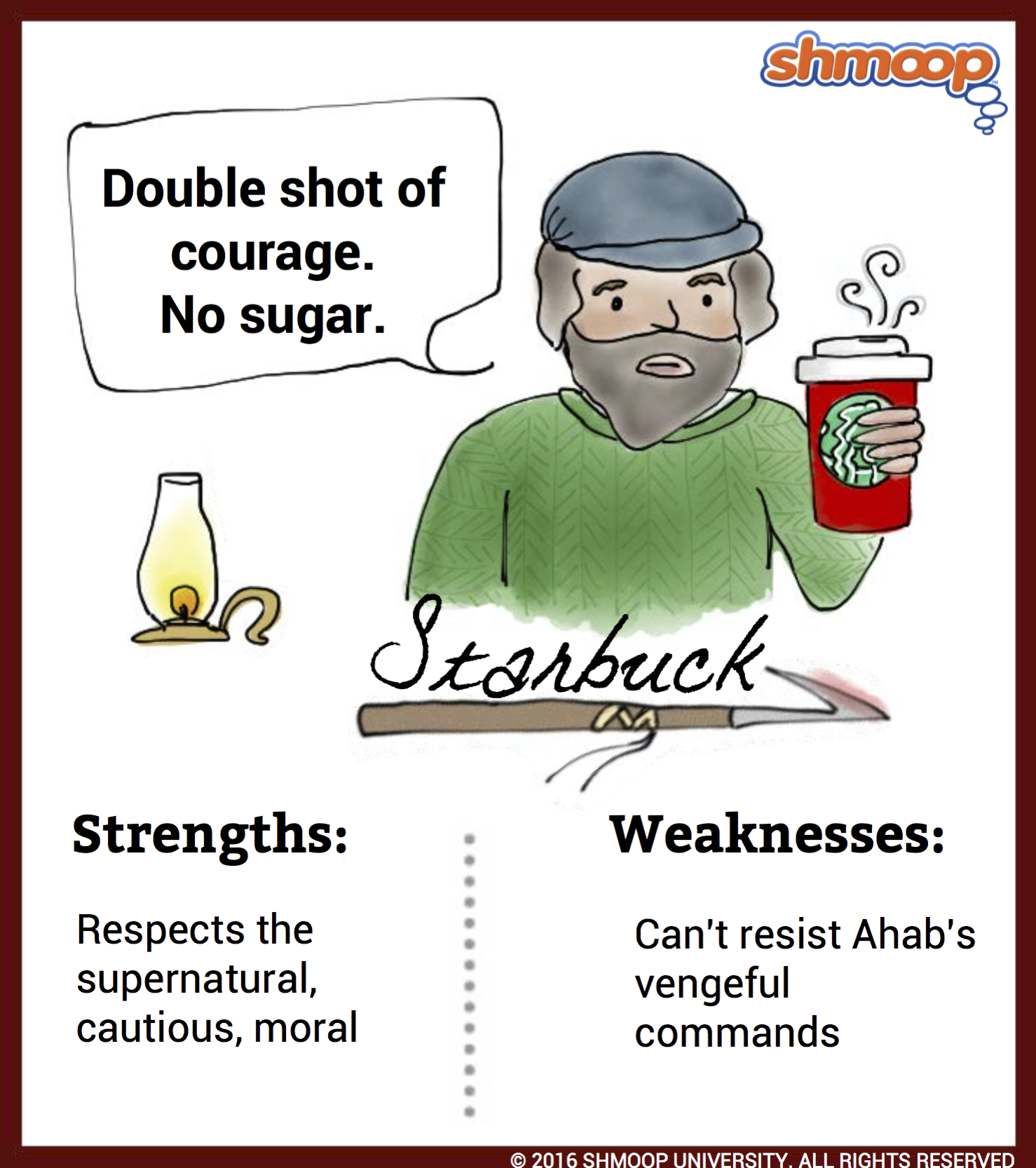 This Starbuck Ain't Going To Make You A Pumpkin Spice Latte

Starbuck, the first mate on board the Pequod, is a long, thin, earnest Nantucket Quaker. His thinness and tightness make him seem condensed, as though he’s been refined or boiled down to his bare essentials. If Starbuck were Starbucks, you'd only ever get a tall coffee with 2% milk. None of those fancy whipped-cream topped dessert coffees, no sirree Bob.

Starbuck is one for action, not words, but he’s also strangely alive to the sixth-sense-prickling of the supernatural. Unlike the other two mates on the Pequod, Starbuck has a healthy respect for the power of whales as adversaries, and he’s only willing to pursue them when it’s necessary and when the situation isn’t getting out of hand. He’s a cautious, quiet, religious man, someone who gives orders to the crew of his boat in tense whispers instead of rowdy shouts:

Starbuck was no crusader after perils; in him courage was not a sentiment; but a thing simply useful to him, and always at hand upon all mortally practical occasions. Besides, he thought, perhaps, that in this business of whaling, courage was one of the great staple outfits of the ship, like her beef and her bread, and not to be foolishly wasted. Wherefore he had no fancy for lowering for whales after sun-down; nor for persisting in fighting a fish that too much persisted in fighting him. For, thought Starbuck, I am here in this critical ocean to kill whales for my living, and not to be killed by them for theirs; and that hundreds of men had been so killed Starbuck well knew. (26.3)

Unfortunately, despite his caution and his morality, Starbuck finds himself strangely unable to resist Captain Ahab’s mad quest for vengeance. This is true even though Starbuck himself spots the main problem with Ahab’s vendetta right away: it’s ridiculous, if not actively against the will of God (remember, Starbuck’s a man of faith), to be angry at an animal for defending itself, as is its nature.

Like Hamlet, Starbuck will face a moment when he’s tempted to commit a righteous murder to avoid future bloodshed—and like Hamlet, he won’t be able to do it.

Even the mad Captain Ahab is touched by Starbuck’s goodness, and eventually decides that, during the hunt for the White Whale, Starbuck will remain in relative safety on the Pequod. But when Moby Dick attacks the ship as well as the boats, Ahab’s attempt to protect Starbuck backfires.

And, yes, the coffee company is named for this guy (according to the "Fact Sheet" on their website it is, anyway). Let us know if you can figure out why, because it doesn’t make a lot of sense to us... except that coffee comes from all over the world and Starbuck travels all around the world.

As Hershel Parker and Harrison Hayford write in a footnote to their edition of Moby-Dick, "In a triumph of modern marketing, the name of the ascetic Starbuck has become associated with exotic coffees and voluptuous additives, as well as baked goods that shame the nautical "duff" or hardtack of Melville’s whale ships." So it’s not just us: people who know this novel front and back think the association is kind of illogical. Still, coffee is tasty, and this novel is good, and you could potentially read this novel at a cafe... so maybe that’s enough?