Beatrice in Much Ado About Nothing 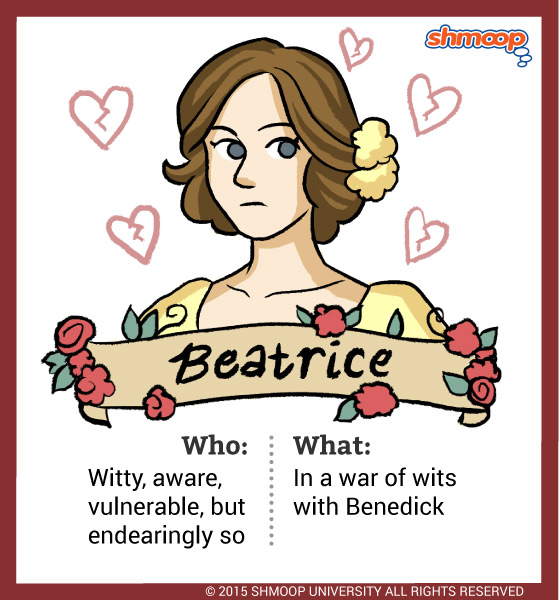 Practically Perfect In Every Way

Beatrice is supposed to be billed as a best supporting actress, but she tends to steal the show. Her white-hot wit, combined with her vulnerability, arguably make her the play’s most fleshed out (and endearingly awesome) character.

Beatrice’s relentless hilarity could easily typecast her in the role of a jester in the play, but her barbs are laced with insightful commentary and often inspired by penetrating understanding. She sees the absurdity of the world and instead of being melancholy; she chooses to laugh at it... which is a sure sign of wisdom.

She would be a fool, except that when things get really grave (during Hero’s first wedding day) and demand seriousness, she’s the first to deliver the passion that the events demand; she asks Benedick to kill Claudio. No, seriously:

Beatrice’s transformation from jester to righteously angry woman isn’t shocking; we know she feels deeply, is smart, and able enough to transfer her feelings into their appropriate outlets... whether that's good humor or anger.

Arguably, Beatrice ultimately falls short of Shakespeare’s greatest comedic heroine, Rosalind of As You Like It. Like Rosalind, Beatrice is self-aware enough to realize she’s fallen victim to love—those cupid's arrows hurt. But unlike Rosalind, she can’t bring herself to use her wit to mock her own situation. Rather than be a character flaw, this "failing" only endears Beatrice to us more. Through snippets of her conversation (like when she tells Don Pedro her mother cried when giving birth to her) we realize that Beatrice is actually a soulful, but tough, character:

She’s been hurt before, and she’s afraid to be vulnerable; if she were to be made vulnerable, she wouldn’t quite know how to deal with it. Beatrice’s pride, though she’s consciously fighting it, gets in the way of admitting her folly in love, and she uses her wit as a defense.

As the play and her character develop, we realize what we might be considering pride is really Beatrice’s fear of being vulnerable to love. She’s been burned before, so unlike Rosalind of As You Like It, Beatrice isn’t willing to give herself over entirely to love. While Rosalind essentially loses her friendship to Celia while she’s enamored with Orlando, Beatrice sticks to her guns and puts loyalty to her cousin above everything else. She’s even willing to walk away from Benedick when he won’t commit to righting Hero’s reputation.

Beatrice’s test of Benedick’s love is how seriously he takes her loyalty to Hero. Ultimately, Benedick comes through (or at least tries to) but Beatrice is still a bit guarded. When asked to publicly declare her love, she’s hesitant, and uses her wit to almost walk away from Benedick in the end. Only when her love is revealed through a stolen love letter she wrote is she willing to admit her affection for Benedick. After her love is declared, she teases Benedick... so we can be sure that Beatrice’s partner is as worthy of her as anyone, and that the couple will have a loving relationship that will stay interesting over time.

Beatrice, more than any character in this play displays the realistic characteristics of a brilliant woman in love. She’s afraid to be vulnerable, she’s scornful of being a wimpy, lovesick fool, and all of these characteristics combine make her hesitant to dive into a romance headfirst. In this way, unlike Hero, who gives over her love like an obedient girl, Beatrice is a wise and warm woman. She is defended by her wit only up to a point, but when the time comes for love, she’s self-aware and realistic enough to realize that she just has to take the risk and hope for the best. Hey, love is terrifying.