Ántonia Shimerda in My Ántonia 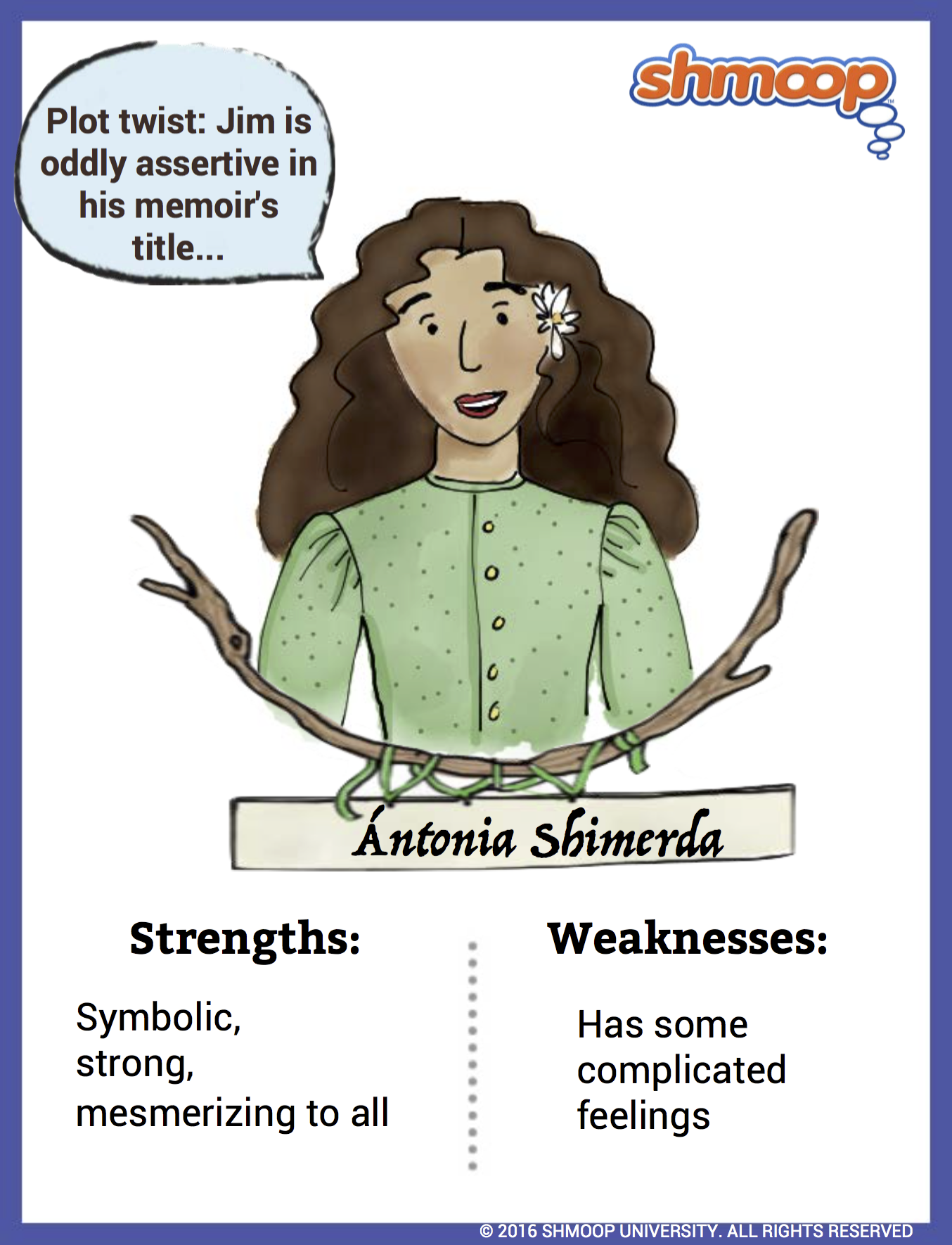 Ántonia as a Symbol

As the nameless narrator tells us early in the introduction, Ántonia is as much a symbol as she is a character:

[Ántonia was] a Bohemian girl whom we had known long ago and whom both of us admired. More than any other person we remembered, this girl seemed to mean to us the country, the conditions, the whole adventure of our childhood. (Introduction, 5)

Indeed, Ántonia is the symbol of many of these things to Jim. She symbolizes the freedom and beauty of the natural landscape in Nebraska. Jim describes her eyes as "big and warm and full of light, like the sun shining on brown pools in the wood," and notes that "in her cheeks she ha[s] a glow of rich, dark colour," and that "her brown hair [is] curly and wild-looking" (2.3.14). Did you notice the scene where she puts a bug into her hair for safekeeping? It's as though Ántonia grew out of the earth. She is part of the landscape.

If Ántonia represents natural beauty to the young Jim, then she represents the grandeur of the past to the older, narrator Jim. All of My Ántonia is filled with a nostalgic element as the narrator looks back at a rather romanticized vision of days gone by. The novel's epigraph sets the stage for this tone – "the best days are the first to flee." (Be sure to check out "What's Up with the Epigraph?" for more on this.) The past is beautiful, Jim decides, but cannot be recovered. And Ántonia – because she was such an integral part of Jim's childhood – represents that beauty.

Ántonia is also representative of the group of immigrants who helped to develop the American West. Her strength, spirit, and sheer will power are a tribute to the fearlessness and determination of this historically important set of individuals. Jim recognizes this, at least by the time he is an adult:

She lent herself to immemorial human attitudes which we recognize by instinct as universal and true. I had not been mistaken. She was a battered woman now, not a lovely girl; but she still had that something which fires the imagination, could still stop one's breath for a moment by a look or gesture that somehow revealed the meaning in common things. She had only to stand in the orchard, to put her hand on a little crab tree and look up at the apples, to make you feel the goodness of planting and tending and harvesting at last. All the strong things of her heart came out in her body, that had been so tireless in serving generous emotions.

It was no wonder that her sons stood tall and straight. She was a rich mine of life, like the founders of early races. (5.1.104-5)

Ántonia certainly faces her fair share of troubles in My Ántonia – harsh winters in severe poverty, her father's suicide, having to work in the fields like a man, Wick Cutter, her fiancé – but she remains unbroken by all of it. That's what Jim so admires about her by the time they are both grown up. "She was there," he says, "in the full vigor of her personality, battered but not diminished" (5.1.13).

Ántonia's character supports the system of reversed gender roles established in the novel. Jim is the passive character, while Ántonia calls the shots, does the field work, builds the muscles, and sets the course of her own life. Consider the episode in which Mr. Harling forbids Ántonia to go the weekend dances anymore – she chooses to leave the Harlings so that she can continue to live her life on her own terms. She's also always willing to take up the role of a man in her family without shame. Later, she takes pride in her baby even while others would shame her for having a child out of wedlock. In Nebraska in 1900, this kind of response wasn't exactly normal. Cather subverts our expectations of "male" and "female," and Ántonia's character is the prime example.

This flaunting of gender roles definitely creates a divide between Ántonia and Jim. When her father dies and Ántonia takes over many of her father's responsibilities, she's proud of her strength and abilities. She shows off her muscles to Jim and brags about how strong she is. But Jim isn't into it. He hates that the other farmers are laughing about Ántonia behind her back, since it isn't proper for a girl to be wearing open-neck dresses and sweating outdoors like a man. This is one of the few fights Ántonia and Jim have during the course of the novel.

One of the other issues we can look at with Ántonia's character is the nature of her feelings for Jim. Jim's feelings for Ántonia are certainly complicated, but at least we get insight into them since Jim is the narrator. We know even less about Ántonia's feelings for Jim simply because we are limited by the novel's point-of-view. Jim doesn't understand how Ántonia feels about him, so neither do we. Still, we do know that Ántonia feels as strongly about Jim as he does about her. When he comes to visit her before law school, they both agree that they mean a lot to each other.

There are a few specific incidents in the novel that might give us some insight into how Ántonia feels about Jim. When they first meet, for example, she tries to give him her ring. It's hard to say whether she just feels gratitude to him because he's going to teach her English, or whether she has a crush on him from the start. Though they spend a lot of time together as children, there never seems to be any explicitly romantic moment between them. When they are up on the roof together watching the storm, we might expect something romantic – but Cather keeps everything platonic.

Things get a little more complicated when the kids grow up and start living in town. Jim gets jealous because Ántonia seems to have feelings for Charley, and Ántonia gets upset when Jim and Lena flirt. It's hard to say, however, whether Ántonia is jealous or just protective of her friend. When they are all by the river together having a picnic, Ántonia pushes Lena away so that she can get the sand out of Jim's hair herself. But again, the motive is unclear. She does tell Lena to stay away from Jim, but it might be because she knows that Lena is trouble.

You can also look at the scene where Ántonia and Jim come home from the dance together and stand by her gate. She says it's all right for him to kiss her, but then pushes him away for kissing her in a certain way. Her reaction suggests that she still sees Jim as a younger brother-type. In fact, she says that she'll tell his grandmother on him. Ántonia is more surprised than anything, which might suggest that she doesn't think about Jim in a romantic way.

At any rate, remember that the ambiguity of this relationship is one of the reasons My Ántonia is so famous. You don't have to classify Jim and Ántonia's relationship. But asking the question is part of the fun of reading the novel.

As we did with Jim, let's start by looking at Cather's historical basis for this character. Ántonia is based on a girl named Anna Sadilek. She came from Bohemia to America with her family on November 5, 1880. It was Anna's father who wanted to move their family to this new country so that they would have a better life. Just like the Shimerdas, the Sadilek was a family of six, with two boys and two girls. (Source: My Ántonia explanatory notes, Oxford World Classics Edition, 2006). Now let's look at the fictional character of Ántonia.