Penelope in The Odyssey 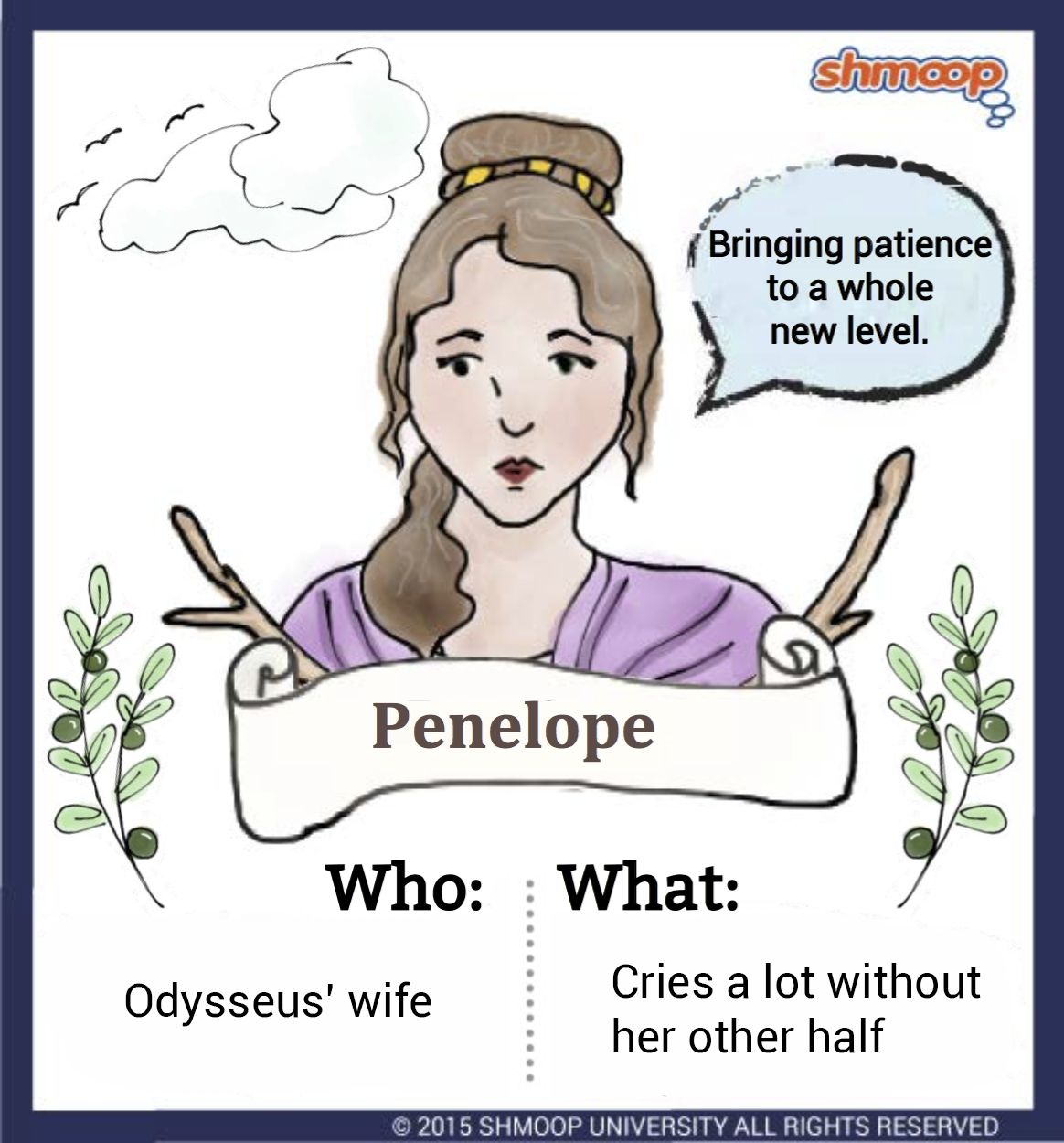 The other Greek wives must have hated Penelope. She's like an ancient Greek Martha Stewart, without the pesky insider trading scandal: the perfect hostess, a faithful wife, a loving mother, and really good with the loom. (And she always bring the best cupcakes at the bake sale.)

It's surprising that she manages to get any of that done, though, since she seems to spend most of her time crying. Swineherd Eumaios tells us that "always with her the wretched nights and days also waste her away with her weeping" (16.38-9); she "grieve[s]" and "tremble[s]" when Telemachos leaves on his vision quest (4.819); she's suffered "sorrows beyond all other who were born" (4.722). She even wishes for death: "How I wish chaste Artemis would give me a death so soft, and now, so I would not go on in my heart grieving all my life, and longing for love of a husband excellent in every virtue" (18.202-204).

When you put it like that, she has a lot to cry about. Her husband "with the heart of a lion" (4.724) has been gone for 20 years and missing for 10 of those, and she's completely helpless against the suitors who have overrun her house. Greek women, as far as we know, were effectively powerless. They spent a lot of their time inside (although how much is debatable); they didn't have much in the way of a social life; and their primary function was to produce cloth.

Ever heard of the distaff? Used for spinning thread, the distaff has been a symbol of femininity since, well, the ancient Greeks. And what does Penelope spend all her time doing? Weaving. Sure, she's deliberately unraveling it. But we get the feeling that, to a woman who really did have to spend most of her life ensuring that her household was clothed, even regular weaving would have felt endless.

She set up a great loom in her palace, and set to weaving a web of threads long and fine. Then she said to us: "Young men, my suitors now that the great Odysseus has perished, wait, though you are eager to marry me, until I finish this web, so that my weaving will not be useless and wasted. This is a shroud for the hero Laertes, for when the destructive doom of death which lays men low shall take him, lest any Achaian woman in this neighborhood hold it against me that a man of many conquests lies with no sheet to wind him." So she spoke, and the proud heart in us was persuaded. Thereafter in the daytime she would weave at her great loom, but in the night she would have torches set by, and undo it. So for three years she was secret in her design, […]. (2.93-106)

Penelope is also associated with linen and cloth through her role as hostess. When Odysseus shows up in disguise, she tells her maids to "give him a wash and spread a couch for him here, with bedding and coverlets and with shining blankets" (19.317-18). Presumably, she and her maids also spun, wove, and dyed every inch of these shining blankets—by hand. (No running to Bed, Bath & Beyond? with a 20% off coupon when some unexpected visitors show up.)

Start to finish, it could easily take a year to produce a good-sized length of cloth, and women would have been involved every step of the way. No wonder Penelope is so obsessed with textiles.

There's something else about her trickery with that loom: you know how Odysseus is constantly described as "crafty"? (No? Check out his "Character Analysis" for all the dirt on tricky Odysseus.) Well, he and Penelope must have been the original power couple, because this lady has some tricks of her own.

The endless weaving is only the first; at the end of the epic, she devises a plot to get rid of the suitors: making them string Odysseus' bow and shoot and arrow through 12 axe heads, when everyone knows that Odysseus is the only guy who can do that. And when he finally reveals himself to her, she's got one more trick up her sleeve: testing him to make sure he knows a secret about their bed. It seem like Odysseus has met his match with this one.

He knows it, too. More than anything else, Penelope seems to represent home. She sure spends a lot of time there, and not even in the public spaces. Eumaios describes her as waiting for Odysseus "with enduring heart" in the palace" (16.37), but she's not hanging out with the suitors. She's waiting upstairs, refusing to go alone into the "great hall" with the men: "I think that immodest" (18.184).

But when Odysseus finally comes home, she's not so modest: Odysseus "wept as he held his lovely wife, whose thoughts were virtuous … and she could not let him go from the embrace of her white arms" (23.231-240). All we hear later is that they "gladly went together to bed, and their old ritual" (23.296), but we're pretty sure that Odysseus is getting lucky tonight. She may be a modest lady in the great hall, but she's a very willing wife in the bedroom. Like we said, she's perfect.

Penelope's cleverness, excellent household management, and apparently innate sense of modesty make her ancient Greece's ideal woman. She's less of a real person than a type, someone for all you ladies out there to model yourselves on. What are you waiting for? Get out that distaff and start spinning.