Years after the end of the Trojan War, the Greek hero Odysseus still hasn't come home to Ithaka. Most people figure he's dead. But we don't: Homer lets us know right away that Odysseus is being held as a (willing) sex captive on the island of the goddess Kalypso. Oh, and sea god Poseidon is ticked off at Odysseus, and sees no reason to let him get home.

Back in Ithaka, Odysseus' wife Penelope is getting swarmed by a horde of unwanted suitors. Odysseus and Penelope's son, Telemachos, now a typically moody teenager, gets a visit from the goddess Athene (who was always chummy with Odysseus). She tells him to go looking for news of his missing father, so he heads to Pylos to visit King Nestor. Nestor takes him in, gives him a dinner—and then tells him to go see King Menelaos in Sparta. Once again, he does as he's told.

In Sparta, Telemachos learns from Menelaos that Odysseus is alive and…well, being held captive on Kalypso's island. Menelaos also tells Telemachos about how his bro, King Agamemnon, was murdered when he got home from Troy by his unfaithful wife, Klytaimestra, and her lover, Aigisthos. It's cool, though: Agamemnon's son Orestes killed the murderers. This fun story raises the question of whether Odysseus will be killed when he gets home, and, if so, whether Telemachos will step up to avenge his father's death. Meanwhile, back in Ithaka, Penelope's suitors plot to ambush and kill Telemachos when he returns home. Oh, the tension!

Up on Mount Olympos, where the gods all hang out, the goddess Athene asks her father, Zeus, the King of the gods, to have mercy on Odysseus and force Kalpyso to release him. Zeus says whatevs, and in no time, Odysseus sails off on a makeshift raft. 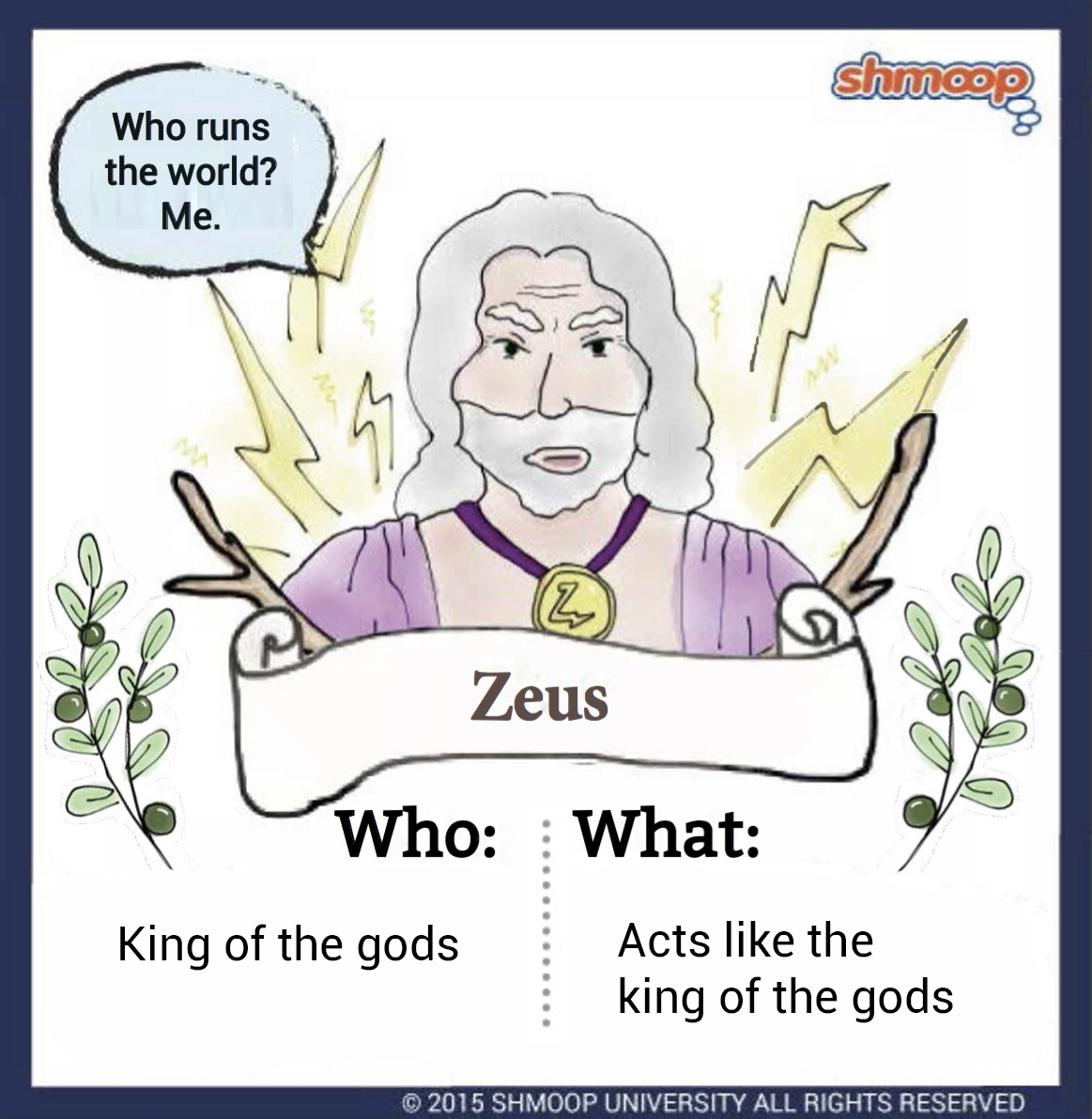 Unfortunately, Poseidon whips up some storms, and instead of getting home, Odysseus washes ashore in the land of the Phaiakians. Fortunately, Athene makes the resident princess, Nausikaa, develop a crush on him. Nausikaa takes him home to meet her parents, the King and Queen of Phaiakia. In return for their hospitality, Odysseus tells them (and us) everything that's happened to him since the end of the Trojan War, which is this:

Odysseus left Troy with a ship of his Ithakan men. At their first stop, they plundered the locals' stuff. Several storm-tossed days later, they landed on the island of the Lotus-eaters. A few guys ate the lotus flower (i.e. every drug your parents have ever warned you about), forgot their homes and families, and had to be taken back to the ship by force.

Next, Odysseus and his men came to the land of the giant one-eyed Cyclopes. They stumbled into a Cyclops cave, and the resident Cyclops (Polyphemos) sealed the entrance to the cave with a huge boulder and ate a few of the Ithakans. Not cool. Odysseus did some of his patented trickery and managed to blind the monster; the next morning, he and his men escaped by riding under the bellies of Polyphemos' flock of sheep.

But as Odysseus was sailing away with his men, his ego got the better of him. He taunted the Cyclops, telling him his real name. Turns out, Polyphemos was the son of Poseidon, the god of the sea. Oops. Guess this is why Poseidon hates our hero so much.

Next, Odysseus and his men came to the island of Aiolos, god of the wind. He helped Odysseus out by putting all the winds—except for the westbound breeze they needed—into a nice little bag. Unfortunately, Odysseus didn't tell his men what's in the bag. On the way home, they opened it up, thinking it was full of treasure. Big mistake. All the winds jumped out and ran riot, thus driving them to the island of sorceress Circe, who turned many of the men into pigs.

With the help of the gods, Odysseus got his men turned back into humans and had sex with Circe. For a year. Finally, one of his men said, "Can we get going already?," and Odysseus said, "OK." Wait—first they had to go the Underworld and get advice from the prophet Teiresias. (Just don't ask Apple Maps for directions.)

At the Underworld, Teiresias prophesied that Odysseus would make it home, but not without difficulty. Odysseus spoke to several other famous dead people (like his war buddies Achilleus and Agamemnon). He also met the ghost of his mother, Antikleia, who had died of grief over her son's prolonged absence. Then, after a quick pit stop back at Circe's island for more directions (who says men don't ask for directions?), Odysseus and his men sailed on for a series of adventures:

(1) When they passed by the Sirens, monstrous women with beautiful voices who try to lure sailors to their deaths, Odysseus made his men plug their ears and tie him to the mast so he could listen to the song without chasing after it. He became the only man to hear the Sirens' song and survive.

(2) Next, they met two horrible monsters (curiously, also female) named Skylla and Charybdis. As predicted by Circe, Skylla (who has six heads) ate six Ithakans; the rest barely escaped Charybdis (a giant vortex who sucks up the sea and vomits it back out again).

(3) Next, they landed on the island of Helios, the sun god, where his very special cattle were kept. Despite having been warned by Teiresias and Circe not to eat the cattle, Odysseus' men couldn't control their hunger. Bad call. Not long afterward, everyone died in a storm—except for Odysseus.

(4) But he was in for his own bad luck: winding up on Kalypso's island to be held prisoner for seven years—before getting free to shipwreck with the Phaiakians, where he's telling this story.

And that's it for Odysseus' story to the Phaiakians. They're so moved by his suffering that they load him up with treasure and ferry him back to Ithaka. (Unfortunately, in return for their trouble, the god Poseidon turns them and their ship into stone.) But the fun isn't over yet—he still has all those pesky suitors to deal with.

Once Odysseus gets home, Athene disguises him as a beggar so he can scope out the situation. Odysseus then recruits the assistance of the swineherd, Eumaios, who puts him up for the night while Athene flies to Sparta to retrieve Telemachos. When Telemachos gets back, Odysseus reveals himself to his son and then heads to the palace, still disguised as a beggar. Without revealing his true identity, he tries to convince Penelope that Odysseus is on his way home and susses out which of his servants are still loyal to the household and which have joined the suitors.

By now, Penelope decides to take action: she'll marry the winner of a content of physical prowess. The challenge? String Odysseus' old bow and shoot it through the heads of twelve axes. You can guess the rest: everyone tries and fails, until the beggar (Odysseus in disguise) steps up. He succeeds, drops the disguise, and, with the help of Telemachos, several loyal servants, and Athene's protection, kills all the suitors in a massive and bloody slaughter. Odysseus reunites with his wife, and everything is back to normal—except that he's just killed all the young noblemen of Ithaka and their parents are furious.

The next morning, Odysseus leaves the palace, reunites with his father Laertes, and lays low while the angry moms and dads start looking for vengeance. Just when it looks like more violence is on the way, Athene appears and asks why we can't all get along. This sounds like a great idea to everyone, and peace is restored in Ithaka.