Carlson in Of Mice and Men 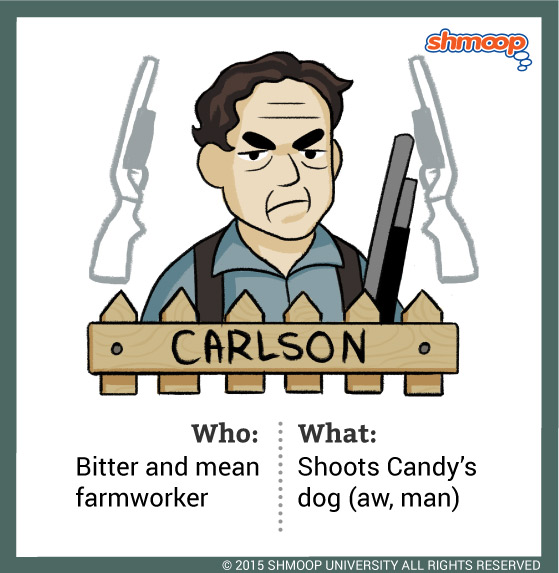 Carlson may be the least interesting important character. We learn about all we need to know from when he tells Slim, "Whyn't you get Candy to shoot his old dog and give him one of the pups to raise up? I can smell that dog a mile away. Got no teeth, damn near blind, can't eat. Candy feeds him milk. He can't chew nothing else" (2.193). And later, he really hammers it home: "He ain't no good to you, Candy. An' he ain't no good to himself" (3).

After years of working on a ranch and only looking out for himself, Carlson has become mean. He's a bitter, coarse, ugly man who only thinks about himself and apparently can't even understand why Candy would hem and haw about shooting the only friend he's ever had.

Of course, that doesn't mean he's wrong. As Slim points out, he's actually right: "I wisht somebody'd shoot me if I get old an' a cripple" (3). The problem is his delivery. Where Slim seems to understand and honor Candy's feelings, Carlson just thinks he's being a big weenie. We get the feeling that Slim would have stood next to Candy and patted him on the back while he shot his dog—but he wouldn't have done it himself. Nope. It takes a man like Carlson to shoot someone else's dog.