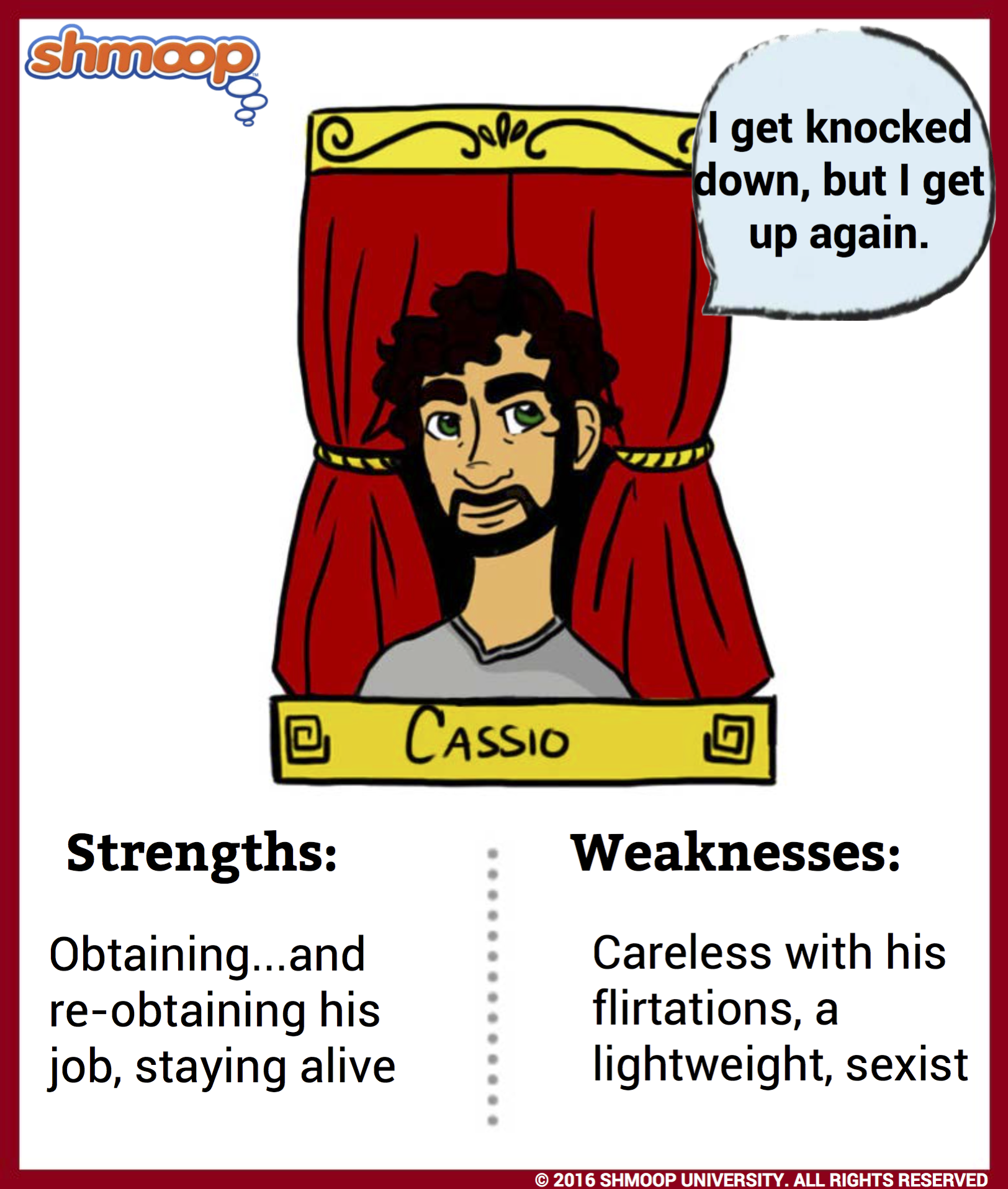 When we begin, Cassio is one of Othello's soldiers, recently appointed the general's second-in-command. This infuriates Iago—because he wanted to be lieutenant, and because Cassio is a math (not muscle) guy—so Iago cannot understand this appointment:

IAGO
One Michael Cassio, a Florentine,
A fellow almost damned in a fair wife,
That never set a squadron in the field,
Nor the division of a battle knows
More than a spinster—unless the bookish theoric,
Wherein the togèd consuls can propose
As masterly as he: mere prattle, without practice
Is all his soldiership. But he, sir, had the election;
And I, of whom his eyes had seen the proof
At Rhodes, at Cyprus and on other grounds
Christian and heathen, must be beleed and
calmed
By debitor and creditor. This counter-caster,
He, in good time, must his lieutenant be (1.1.21-34)

Like all people, real and imagined, he's got some flaws. First, he's a lightweight when it comes to drinking. This is the weakness that Iago exploits when Iago gets Cassio drunk and sends him off to fight Roderigo. Second, Cassio's a little too much of a lady's man. This angers Iago—Cassio's kissing Emilia in front of Iago is a bad idea. It also comes back to bite Cassio in the end, since his flirtatious charisma helps convince Othello that Cassio is having sex with Desdemona.

A Sucker For Dichotomies

Cassio is the kind of guy who likes to put women in one of two categories – virgin or whore. When he talks about Desdemona, we can tell that he sees her as a kind of secular Virgin Mary. Here's what he says when Desdemona arrives in Cyprus:

Clearly, Cassio worships Desdemona, but he has a tendency to mock his courtesan girlfriend, Bianca, who, sadly, is pretty smitten with Cassio. As Iago points out, "when [Cassio] hears of [Bianca], he cannot refrain / From the excess of laughter" (4.1.115-116).

While Cassio may not be guilty of sleeping with another man's wife, it seems pretty clear that he's kind of a jerk when it comes to women.