Aunt Helen in The Perks of Being a Wallflower 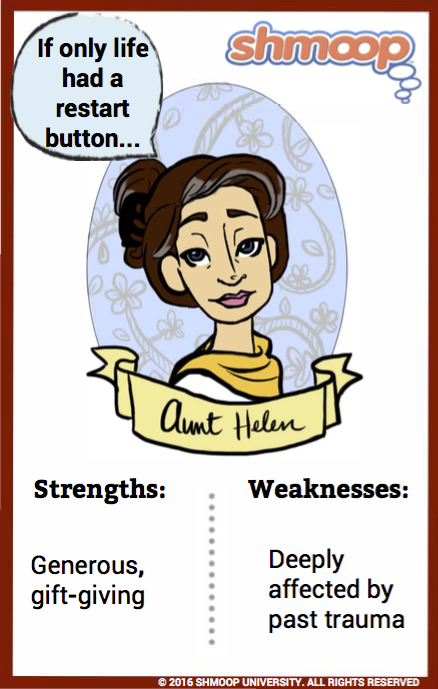 Charlie's aunt Helen was his "favorite person in the whole world" (1.1.26). In fact, she is his only relative that gets a name. That's saying something.

But there's much more to it than that.

Her Story Repeats Itself

Growing up, Aunt Helen was molested by a friend of the family. When she finally told her parents, they didn't believe her. They did nothing to stop it, and even continued inviting the man into their home. Eventually, Aunt Helen grew up and got away. But of course, the trauma stayed with her: "My aunt Helen drank a lot. My aunt Helen took drugs a lot. My aunt Helen had many problems with men and boys. […] She went to hospitals all the time" (2.13.9).

Victims of abuse often become abusers themselves. And of course, Aunt Helen goes on to molest Charlie. She took advantage of shy, quiet Charlie's love and trust. Charlie forgives her, but it has changed the course of his life forever.