Bill in The Perks of Being a Wallflower 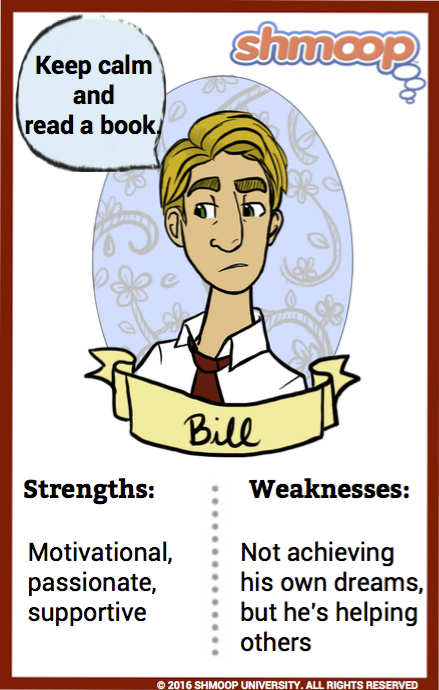 Early on, Bill recognizes Charlie's intelligence and writing talent, and by the end of the book, he ends up considering Charlie not just a great student, but a friend. We'll let you vote: awesome or inappropriate?

Bill is a motivator, that's for sure. He encourages Charlie to write by providing him with extra books to read—On the Road, The Stranger, The Catcher in the Rye—and assigning him essays, to boot. Sounds like a tough nugget, but he has the best intentions.

Bill does blur the line between teacher and friend, though. Yes, he is a responsible adult. When Charlie tells Bill about his sister's abuse at the hands of her boyfriend, he calls Charlie's parents and tells them about it. But another time, he lets Charlie smoke in his office. We know it's 1991, but come on, Bill.

When Charlie shows up for lunch at Bill's place without any reservations, we want to warn him: be careful. We're pretty sure Bill's an okay guy, but we're also pretty sure you can't always trust so blindly.

Big Apple for the Teacher?

We're getting a little cynical here, so let's move on. Open-minded reading for all! Bill is great to Charlie, giving him the encouragement he doesn't really get anywhere else. He tells him, "You're one of the most gifted people I've ever known. And I don't mean in terms of my other students. I mean in terms of anyone I've ever met" (4.12.51).

In the end, their relationship is mutually beneficial. In Bill, Charlie sees that teachers are people too: they have lives outside of school—hopes, fears, dreams, and relationships. And he is able to nurture his love for literature and writing. In Charlie, Bill sees that he can make a positive difference in a student's life. Sure, he never achieved his dream of moving to New York to be a writer, but he's helping other people's dreams come true.