Charlie in The Perks of Being a Wallflower 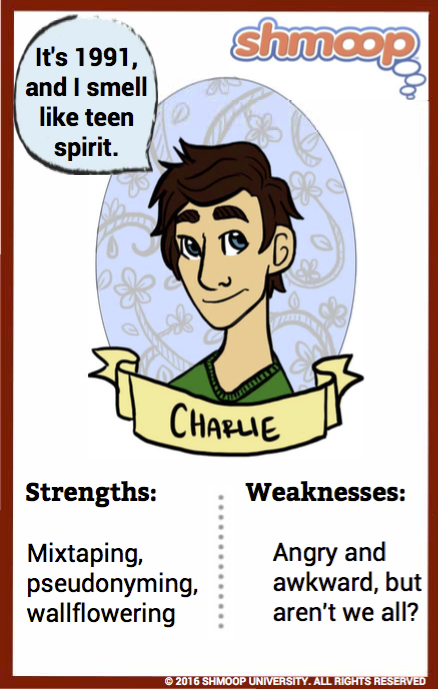 Our little wallflower Charlie spends a lot of time analyzing, well, everything. He's always in his head, trying to think through some of life's great mysteries. He has all sorts of ideas on what he wants to be when he gets older, but he never seems to actually do anything to work toward those goals.

He really does live in his own little world sometimes, watching people and analyzing them. But he never seems to dig too deep, does he? We get a glimpse of his unintentionally judgmental analysis early on, when he refers to people in his counseling group as "Bridget who is crazy" (1.1.11) or "Carl who is nice to everyone" (1.1.11).

And Charlie doesn't realize that people might be doing the exact same thing with him: "I didn't know that other people thought things about me" (1.10.109). Well, buddy, we've been doing a great deal of thinking about you. Buckle your seatbelt.

You're a Good Man, Charlie… Whatever Your Last Name Is

One of the first things Charlie tells us is that all the names in his letters are pseudonyms (i.e., fake). We can only assume that Charlie is also a nom de plume. Here's hoping Charlie isn't actually this guy.

That little breach of trust makes us a little wary; we're not sure we can believe everything Charlie says. After all, we've read enough books to know all about the unreliable narrator. But if Charlie is unreliable, he sure has us fooled. He really seems like an honest kid and an all-around good guy. Maybe a little disturbed, but that's hardly his fault.

Charlie makes some pretty frank observations about his family and friends, sex, and life in general. Fair enough, we guess, but he always seems to voice his opinions at, um, inopportune moments, like when he tells Sam—within a week of meeting her—that he had a sex dream about her. (Do not try this at home.) And instead of hiding these possibly embarrassing moments, he details them in his letters.

Even though Charlie can be unabashedly frank, it comes from a good place. In fact, we're pretty sure Charlie doesn't really have a mean bone in his body. Early on, he uses a not-so-flattering vocabulary word to refer to his aunt Helen. He writes with glee, "My Aunt Helen was 'corpulent.' Hey, I did it!" (1.6.30). Instead of being a cruel, teenage boy, he's just proud that he used a new vocabulary word. We'll give him an A for effort and a D- for tact.

Life would be really different for Charlie if he'd been a 21st-century teen. Between e-mail, texting, and instant messaging, we're betting Charlie would have never had face-to-face contact with another human being. And no, that's not a good thing—especially not for our wallflower.

Charlie is shy enough as it is, and he has a tough time making friends. Once he does, he has a tendency to be a little self-destructive. Take Mary Elizabeth (please!). Charlie isn't happy with their relationship one bit. But does he voice his concerns or break it off with the girl? No, of course not. Instead, he just starts to act like her—without even realizing it.

After she buys him a new E.E. Cummings book, Charlie is not psyched: "I wasn't grateful at all. […] I was starting to get mad. Maybe if she would have given me the copy of the book that she bought herself, it would have been different" (3.11.5). But then he goes ahead and buys her a new copy of To Kill a Mockingbird, because it's special to him. Hmmm. Is he being passive-aggressive or is he just totally oblivious?

Despite Charlie's efforts to "put [his] feelings away somewhere" (3.11.4), they all boil over at the truth-or-dare party. After being dared to "kiss the prettiest girl in the room on the lips" (3.11.23), Charlie kisses Sam. Not Mary Elizabeth. Needless to say, that dare brings out the truth and drives a huge wedge between Charlie and all his friends. While it was nice of him to finally be honest with his feelings, he probably could have expressed himself in a less destructive, less embarrassing way. Like, say, talking about it?

If Charlie were a teenager today, we would direct his attention to the website passiveaggressivenotes.com. Maybe some Post-Its would help him vent his frustrations. Or maybe he would just eat other people's yogurt and post photos of their angry notes online. Who knows?

Although his heart is in the right place, that doesn't stop Charlie from beating people to a pulp. That's the aggressive-aggressive in him coming out. And as it turns out, it goes way back: "I used to play sports when I was little, and I was actually very good, but the problem was that it used to make me too aggressive, so the doctors told my mom I would have to stop" (2.4.14). An apple a day probably won't help him on this one.

Charlie beats up his first bully, Sean, a mere few days into his freshman year. And his post-beating reaction gives us a clue to the frustration and rage simmering beneath Charlie's seemingly calm surface: "I just don't understand why Sean wanted to hurt me. I didn't do anything to him. […] The truth is I could have hurt him a lot worse. And maybe I should have" (1.2.9). Seems to us like a classic case of bottling up feelings until they explode.

Later in the school year, Charlie plays pro wrestler and busts some kneecaps with a folding chair. Charlie has the strength of four football players when he's angry, and he makes sure his victims know he's a force to be reckoned with: "If you ever do this again, I'll tell everyone [your secret]. And if that doesn't work, I'll blind you" (3.3.20). Yowza. Charlie's totally aware of how dangerous he can be, but he's doing what he can to control it. Just don't mess with him or his friends.

Even better, don't mess with anyone, and the world will be a friendlier place. Just sayin'.

A Wallflower with Tangled Roots

So where does all this anger and awkwardness come from? That's an answer we—and Charlie—get loud and clear at the end of the novel.

Throughout his letters, Charlie talks about his aunt Helen a lot: "My Aunt Helen was my favorite person in the whole world" (1.1.26). He writes about her, visits her grave, and feels insanely guilty about her death. But we don't really pay too much attention to it all until we find out why. And neither does Charlie.

When Charlie realizes that Aunt Helen had been molesting him, it's like a dam is broken, and Charlie gets washed away. It will take our wallflower a long time to process his feelings, and he'll need lots of help doing it. But there is hope. As Charlie says, "Even if we don't have the power to choose where we come from, we can still choose where we go from there" (Epilogue.14).

Where will Charlie go? He sure has a lot of ideas. He spills a lot of ink talking about how great it would be to "have written one of those songs [on Patrick's mix tape]" (2.7.9), or to write a story, or write for a newspaper. He thinks about how "it would be fun to have 'glory days'" (2.4.13) to tell his eventual children about. He dreams about going off to college, having a roommate, and maybe being valedictorian.

But he never actually does anything. He writes only one line of a story before giving up. He doesn't contribute to Punk Rocky. And that typewriter Sam gave him is just sitting around gathering dust. Sure, he gets good grades, but he doesn't ever seem proud of himself: "I ended up getting straight A's this whole year. My mother was very proud and put my report card on the refrigerator" (4.13.138). Not the most thrilling account, is it?

We hope Charlie can gain some confidence someday. In the meantime, maybe he's got a career as a deejay in the bag. He has a great knack for mixing together some killer mood music, and Craig encourages him to pursue it. Charlie does agree with him, thinking it would be a great way to save up money for college. Plus, "it was a great way to sit alone at a party and be a part of things" (4.9.9). Hey, whatever it takes.