Patrick in The Perks of Being a Wallflower 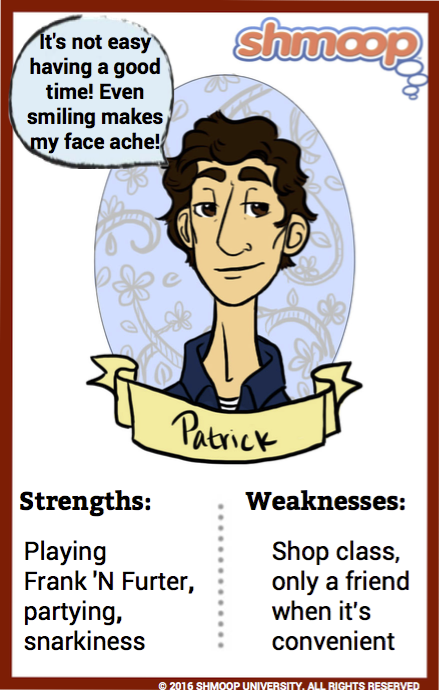 Patrick is one of Charlie's best friends. Well, he's one of Charlie's only friends. We only get to see Patrick through what Charlie decides to share in his letters. And from Charlie's P.O.V., Patrick seems like a happy-go-lucky guy who goes through a rough breakup before leaving his hometown and going to college. But we're pretty sure there's much more to him than that.

When Charlie first meets Patrick, Patrick is still known as "Nothing." As Charlie tells it, "Kids started calling him Patty when his real name is Patrick. And 'Nothing' told these kids, 'Listen, you call me Patrick, or you call me nothing'" (1.5.3). And… they chose the latter. Gotta love high school.

Charlie says that "Patrick usually isn't unhappy" (4.4.17), but we're not so sure. Is it possible that Patrick is just holding a lot of it inside? Being bullied is never painless, and letting it roll off your shoulders is easier said than done.

Patrick isn't Nothing to everyone, though. He's definitely caught the attention of the school quarterback, Brad. Not bad, Patrick.

As it turns out, Brad and Patrick are in a steamy secret relationship. You can learn more about Brad in his "Character Analysis." Go ahead and check it out—we'll just have a Twinkie or two while we wait. Back? Okay. Now you know that Brad wants to keep his relationship with Patrick a secret; he doesn't want anyone to find out that he's gay.

As observant as he is, Charlie doesn't really seem to see how unhealthy this secret relationship might be. After a science experiment involving a rodent, an electrical current, and "some kind of rat or mouse nip" (2.3.2), Charlie learns that "the rat or mouse would put up with a lot more voltage for the pleasure" (2.3.2). But he completely fails to connect the dots between the experiment and Brad and Patrick's relationship. Patrick's the mouse, Brad is totally mouse nip, and Patrick is willing to put up with a lot in order to continue seeing Brad.

So that's Charlie's take on it, but what about Patrick's? According to Charlie, "[Patrick] wasn't sad because at least now, Brad doesn't have to get drunk or stoned to make love" (2.1.31). But just as Patrick went along with being called Nothing, he goes along with this secret relationship—this is self-destruction at its worst.

After Brad's dad walks in on Patrick and Brad together and Patrick almost gets beaten up by Brad and his friends, his mental state plummets. He's fed up with life and all its imposed rules. He talks to Charlie (well, he talks at Charlie, because Charlie never really responds), saying, "You ever think […] the only real difference between us [and any other group] is what we wear and why we wear it? […] Well, I think it's bulls***" (4.3.59-61).

Patrick turns to drinking, drugs, and sex to numb himself from all the pain he's feeling. He's desperate to get away, telling Charlie, "I'm going away to college, right? It'll be different there. You know what I mean?" (4.4.18). But until he can get away physically, he tries to get away mentally. Thankfully for Patrick, he suffers little, if any, consequences of his reckless actions. We don't hear of any overdose, injury, or STD. Charlie simply says, "After a while […] he ran out of things to make himself numb" (4.5.24). And he just stops.

Patrick plans to attend the University of Washington. Charlie says that "[h]e wants to be near the music there," (4.8.4), but maybe he also wants to get away from the narrow-minded people in his small town. Maybe he's finally going to stand up for himself and escape.

In Good Times (But What About Bad?)

In good times, in bad times, I'll be on your side forever more… Oh, sorry, just a little "That's What Friends are For" moment over here. We're talking about best friends, after all… right?

Now that we think about it, Patrick never really spends any solo time with our guy, even when Charlie reaches out to him after the truth-or-dare disaster: "[Patrick] said that he would be busy with Brad and family things, but he'd try to call me if he could find the time. So far, he hasn't" (3.12.9). Strike one.

To top it off, Patrick only hangs out with Charlie when he's lonely. Strike two.

And even then, he drags Charlie to the park and other hook-up locations, often ditching him once they get there. Strike three.

But Charlie appreciates the attention, even if it is one-sided, and he fears that it's temporary: "Maybe since he isn't sad, he won't want to spend time with me" (4.10.5). That's not the best kind of friend to have, and as far as we can tell from Charlie's letters, his fears come true. Charlie was there for Patrick, but Patrick just didn't return the favor.