Sam in The Perks of Being a Wallflower 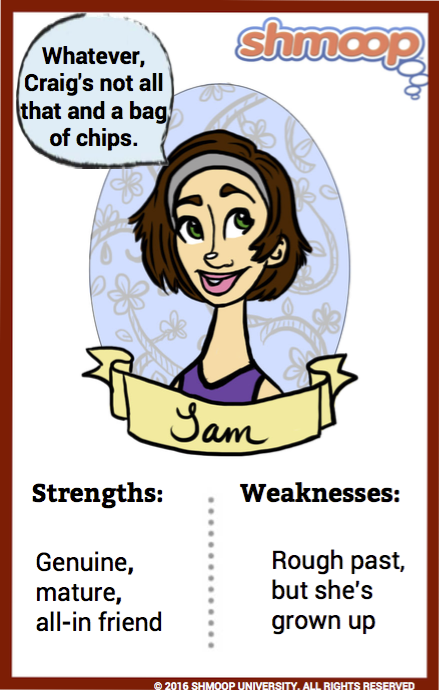 Okay, we know what she looks like, but what is Sam all about? Here's the problem: Charlie holds her in such high regard that he doesn't spend a lot of time thinking too critically about her. That means we have to do the thinking ourselves.

Here's our take on the girl:

In Charlie's mind, though, Sam is just an unachievable goal. She's pretty clear in her request that he doesn't pursue her: "I like Craig. And I know that I told you not to think of me that way. And I know that we can't be together" (2.8.37). And then, naturally following those comments, she kisses him. Wait, what? That would be a little confusing to any fifteen-year-old—even more to internally-conflicted Charlie.

Despite confusing Charlie, Sam does have his best interests at heart. She really wants him to get out and be social, and she encourages him to go out with Mary Elizabeth. It doesn't end well, sure, but she's trying her best.

A Second Opinion From an Esteemed Colleague

So we know what Charlie thinks of Sam (cue clouds parting, a heavenly chorus, and an ethereal spotlight shining from above), but we get another perspective from Charlie's sister. Her analysis? Sam has low self-esteem.

We're not so sure. While that might have been true in Sam's promiscuous days, she seems to have a higher opinion of herself now. When Craig confesses that he's been cheating on her with multiple girls, she instantly walks out on him. That's more than Charlie's sister can say for herself.

And Sam is mature about the whole thing, to boot: "She wasn't bitter. She was sad, though. But it was a hopeful kind of sad. The kind of sad that just takes time" (4.14.5). Plus, she quickly realizes where she made mistakes: "I didn't do things because I didn't want him to think different about me. But the thing is, I wasn't being honest" (4.14.47). Sam is on her way to adulthood—maybe she'll take Charlie along with her.

Sam's genuine concern for Charlie is pretty clear—especially when compared to how her step-brother treats our wallflower. When Charlie starts to freak out because of his repressed memories, she handles it with grace. And although she has to leave for college shortly after Charlie's breakdown begins, she comes back to visit and takes him through the tunnel that he loves. Or should we say the tunnel of love? Something tells us that this is a lasting friendship—and maybe more.

One final thing to think about. Sam tells Charlie that her first kiss was with one of her dad's friends when she was seven. Hmmm. We're not sure what to make of this, but it definitely creates a faint parallel between Sam and Charlie's Aunt Helen, who was molested by a friend of her family.

Sam wants Charlie to have a better first-kiss experience than her own: "I want to make sure that the first person you kiss loves you" (2.8.39). Little does she (or he) know, it's too late—he's already been traumatized by his Aunt Helen.