Georgiana Darcy in Pride and Prejudice 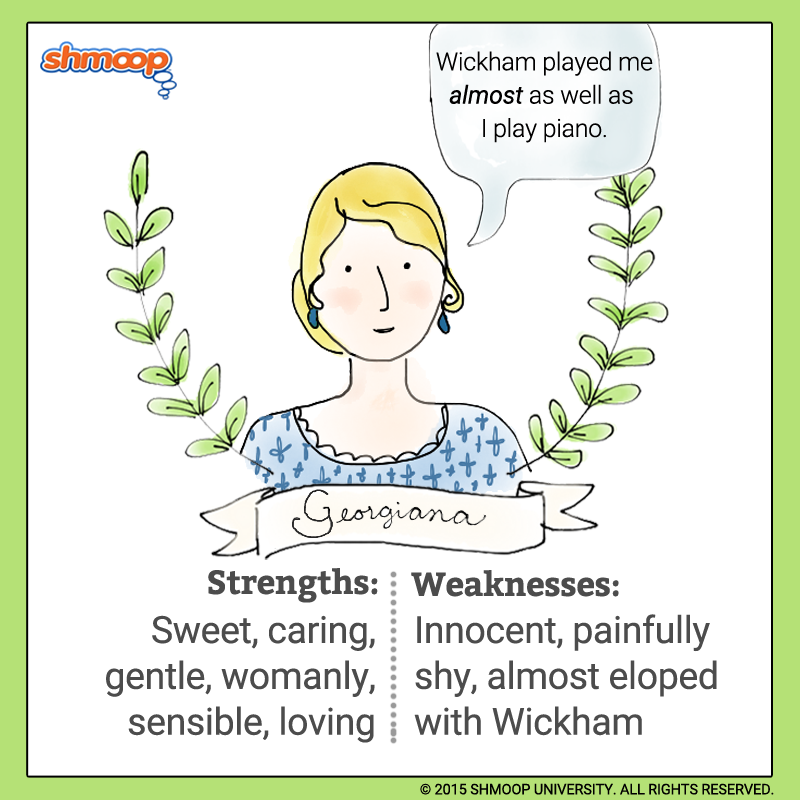 Georgiana is Mr. Darcy's painfully shy and sweetly malleable sister. Wickham calls her "proud," but Lizzy figures out pretty quickly that she was only "exceedingly shy" (44.3), so it makes sense that Wickham was able to fool the girl into thinking she was in love with him. Aside from that lapse in judgment—which is totally forgivable—she seems like a nice girl:

Miss Darcy was tall, and on a larger scale than Elizabeth; and, though little more than sixteen, her figure was formed, and her appearance womanly and graceful. She was less handsome than her brother; but there was sense and good humour in her face, and her manners were perfectly unassuming and gentle. (44.4)

In other words, Georgiana is a lot more like Jane than she is like Elizabeth. (Oh, and BTW, descriptions like "her figure was formed" and "womanly" are early nineteenth century code for "bosomy." Why do you think Austen throws that in?)

About ten years younger than Darcy (more like eleven, if we accept Darcy's implication that he's 28 in chapter 58, paragraph 54), she looks up to her older brother with a "respect which almost overcame her affection" (61.15). Imagine her surprise when she sees Lizzy actually teasing the guy: "at first she often listened with an astonishment bordering on alarm at her lively, sportive manner of talking to her brother" (61.15). In the end, though, Lizzy is a good influence on the girl—and our fingers are crossed that she'll make a good marriage of her own someday.