Jane Bennet in Pride and Prejudice 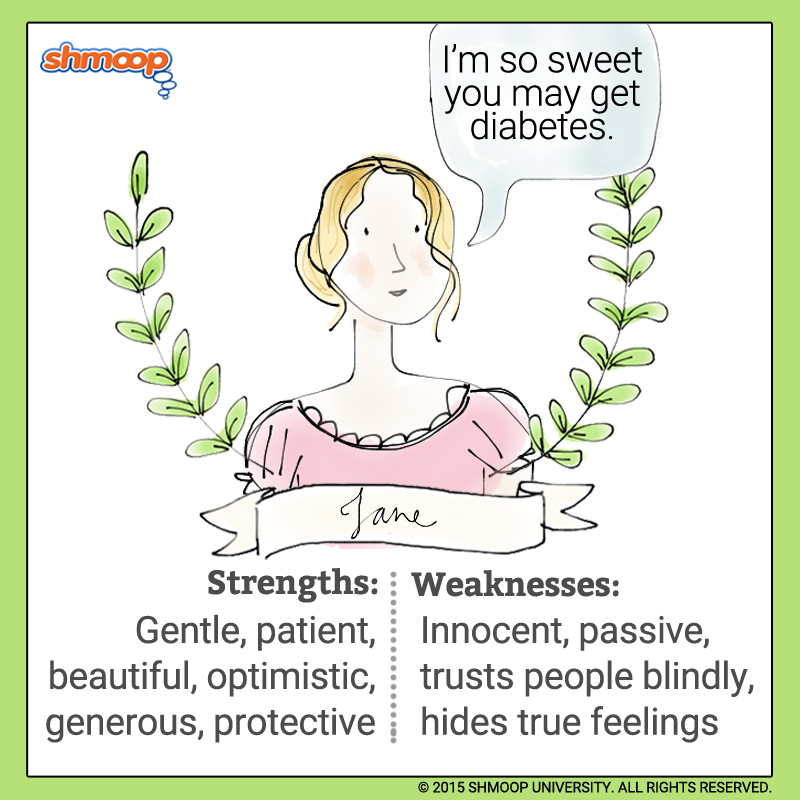 The oldest Bennet sister is Elizabeth's best friend and hopelessly in love with Charles Bingley—although she'd never admit it. She's also almost painfully naïve, someone who, as Lizzy says, "never see[s] a fault in anyone" (4.7). If this were a Disney musical, she'd be singing over her dustmops.

When Lizzy insists that Miss Bingley is trying to separate her from Mr. Bingley, Jane "shook her head" (21.17); when she finally realizes that it's true, she says, "I do not at all comprehend her reason for wishing to be intimate with me; but if the same circumstances were to happen again, I am sure I should be deceived again" (26.26); when the sisters talk about how Wickham's rich girlfriend Mary King broke up with him, Jane just says, "I hope there is no strong attachment on either side" (39.13).

You get the picture. She's all wide-eyed innocence and good nature, and if she weren't so sweet we'd probably find her kind of irritating. As Mr. Darcy says, she "smile[s] too much" (4.16).

Of course, the problem with smiling at everyone is that it's hard to tell when you actually like someone. And that's just Jane's problem. Mr. Darcy explains in his letter to Lizzy:

"Your sister I also watched. Her look and manners were open, cheerful, and engaging as ever, but without any symptom of peculiar regard … the serenity of your sister's countenance and air was such as might have given the most acute observer a conviction that, however amiable her temper, her heart was not likely to be easily touched. That I was desirous of believing her indifferent is certain—but I will venture to say that my investigation and decisions are not usually influenced by my hopes or fears. I did not believe her to be indifferent because I wished it; I believed it on impartial conviction, as truly as I wished it in reason." (35.3)

The problem is, Jane is behaving exactly as she's supposed to. Women weren't supposed to show their interest; they were basically supposed to wait for men to propose and only then decide that they were actually in love. By being open and friendly and not distinguishing Bingley, Jane is protecting her reputation and the reputation of her family—unlike some other girls, ahem, Lydia.

Ordinarily, all these good qualities—being calm, sweet, friendly, not flirtatious—would make Jane the big winner. Instead, she almost loses everything. Why? Well, we'll throw a couple of possibilities out there:

Possibility #1: Austen isn't too keen on the good-quiet-understanding model of female behavior. Jane is nice and all, but imagine if she were the main character instead of Elizabeth. Total snoozeville. Not only that, but it turns out that there is such a thing as being too demure. Jane is so shy with showing Bingley how much she likes him that no one around them can tell whether she's really into him or not. While flinging yourself at guys Lydia-style isn't the way to go, Jane is too far to the other side of the spectrum.

Possibility #2: Jane is in the novel to give Elizabeth one more thing to be wrong about—and to have to figure out from another person's perspective. Elizabeth is really committed to her own point of view in the beginning, and part of her process learning to see situations the way other people see them. When Charlotte points out that Jane isn't sending out enough signals to Bingley, Elizabeth gets all huffy and says that anyone who knows Jane well would know she loves him: "If I can perceive her regard for him, he must be a simpleton, indeed, not to discover it too" (6.3)

As Charlotte points out, though, that's a pretty flimsy argument. Not everyone knows Jane as well as Elizabeth does. When she reads Darcy's letter and finds out that he totally couldn't tell whether Jane loved Bingley or not, Elizabeth has to go back, reexamine, and learn. Thanks, Jane! Glad everything worked out for you, so Lizzy could learn her valuable lesson.