Orcs in The Return of the King

This little jerk is an orc from Barad-dûr, stationed in the Tower of Cirith Ungol, who leads a fight against Shagrat and the other orcs of the tower over the treasures stripped from Frodo's body. We meet Gorbag in Book 4, Chapter 10 of The Two Towers, when he and Shagrat take an unconscious Frodo captive. He suggests that Frodo may have a companion still at large in Mordor, an Elf warrior, he thinks. (We love Sam, but an Elf warrior he most certainly is not.)

When Sam finds Shagrat sitting at the top of the Tower of Cirith Ungol, Shagrat is complaining that Gorbag managed to knife Shagrat before Shagrat strangled Gorbag. But Gorbag is not quite dead. As Shagrat is distracted with Snaga, Gorbag tries to stab Shagrat in the back with a spear. Unfortunately, he doesn't succeed: "Quick as a snake Shagrat slipped aside, twisted around, and drove his knife into his enemy's throat" (6.1.54). So Gorbag dies, all in the name of style: he really wants that mithril-shirt. And really, who wouldn't?

Shagrat is Captain of the Tower of Cirith Ungol. We meet him at the end of The Two Towers, when he and Gorbag discover Frodo's unconscious body lying in Shelob's lair. In The Return of the King, Sam finds Shagrat sitting at the top of the orc tower, surrounded by the bodies of other orcs.

Shagrat has been injured in the orc rebellion led by Gorbag, orc of Barad-dûr. Shagrat whines, "he [Gorbag] knifed me, the dung, before I throttled him" (6.1.47). Shagrat and Gorbag fall into this mini-war over Frodo's mithril-shirt, which they are actually willing to fight to the death over. 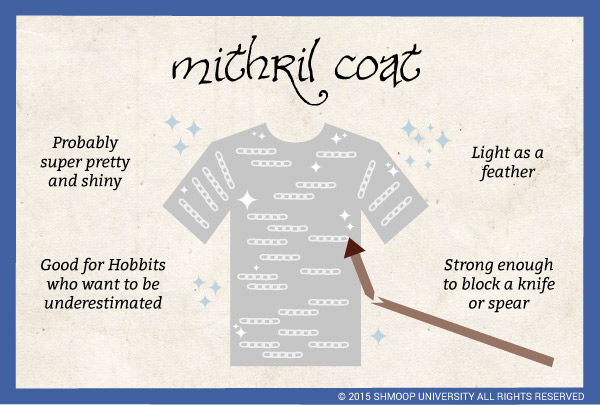 Shagrat tries to bully his one remaining soldier, Snaga, to go down to Barad-dûr (a.k.a. Lugbúrz in Mordor language) with the news that they have captured a hobbit. But he doesn't even have the authority to manage that. Snaga is too afraid of Gorbag's tales of a "great fighter about, one of those bloody-handed Elves" (6.1.50) to move a muscle downstairs. So Shagrat chases Snaga all around the roof until Snaga ducks into the turret and disappears. Shagrat then knifes Gorbag, who was not quite dead (that is, until he gets a knife to the throat). Shagrat picks up a bundle near his feet and walks down the stairs.

Sam tries to attack Shagrat at this point, but Shagrat clings to his treasure and runs away. The pressure of the Ring (which Sam is carrying) on Shagrat, and the shine of Sting, both give Sam an advantage. But Shagrat's escape means that Barad-dûr gets Frodo's stuff in time to show it to Gandalf and Aragorn at the showdown at the Black Gate of Mordor.

Tolkien is so careful with the continuity of his stories that he even insists on explaining exactly how the Mouth of Sauron got Frodo's armor and Lothlórien cloak, instead of just leaving us to assume that the orcs brought the stuff to Lugbúrz somehow. Now that's attention to detail.

Snaga is another orc of the Tower of Cirith Ungol. He is happy to fight the "stinking Morgul-rats" (6.1.48)—a.k.a. the orcs from Barad-dûr—but he is not particularly loyal to his captain, Shagrat. When Shagrat threatens Snaga to try and force him to go to Barad-dûr to report their new prisoner, Snaga refuses to move out of fear of the great Elf warrior Gorbag told everyone must be hanging around Cirith Ungol.

Of course, Frodo does have a companion, Sam, but he's just a little hobbit. Still, the mere rumor of danger is enough to send these cowardly orcs hiding in their towers. Let's be honest: Sauron's servants aren't worth much individually. When Shagrat runs off to Barad-dûr, Snaga stays behind to guard Frodo. Snaga is the one who tells Frodo to shut up after he sings a snatch of rhyme to answer Sam's song from the floor below him in the Tower of Cirith Ungol.

When Sam spots Snaga with the ladder that leads to Frodo's cell, he also sees Snaga cracking a whip at poor Frodo. Sam is so angry at this terrible treatment of his dear friend that he leaps up with Sting in hand and cuts Snaga's whip hand from his arm. Ick. When Snaga tries to rush at Sam, he trips and falls through the trap door. Sam finds his broken-necked body at the base of the rope ladder. Well, that's one less orc to worry about.

We find Snaga interesting for one other reason: there is another Snaga in the The Lord of the Rings series: Snaga II is a scout for the orcs of Isengard in The Two Towers Book 3, Chapter 3. Clearly, they can't be one and the same orc, since Two Towers Snaga II (a) serves Saruman, and (b) was presumably slaughtered by the Rohirrim in their battle with this team of orcs. So we wonder if Snaga is a common orc name, like "John" or "Steve" for orcs? Or if Tolkien just ran out of suitably ugly, rough-sounding names for his minor orc characters and so had to start repeating. Or maybe he just forgot? Nah, we doubt it.