Paris in Romeo and Juliet 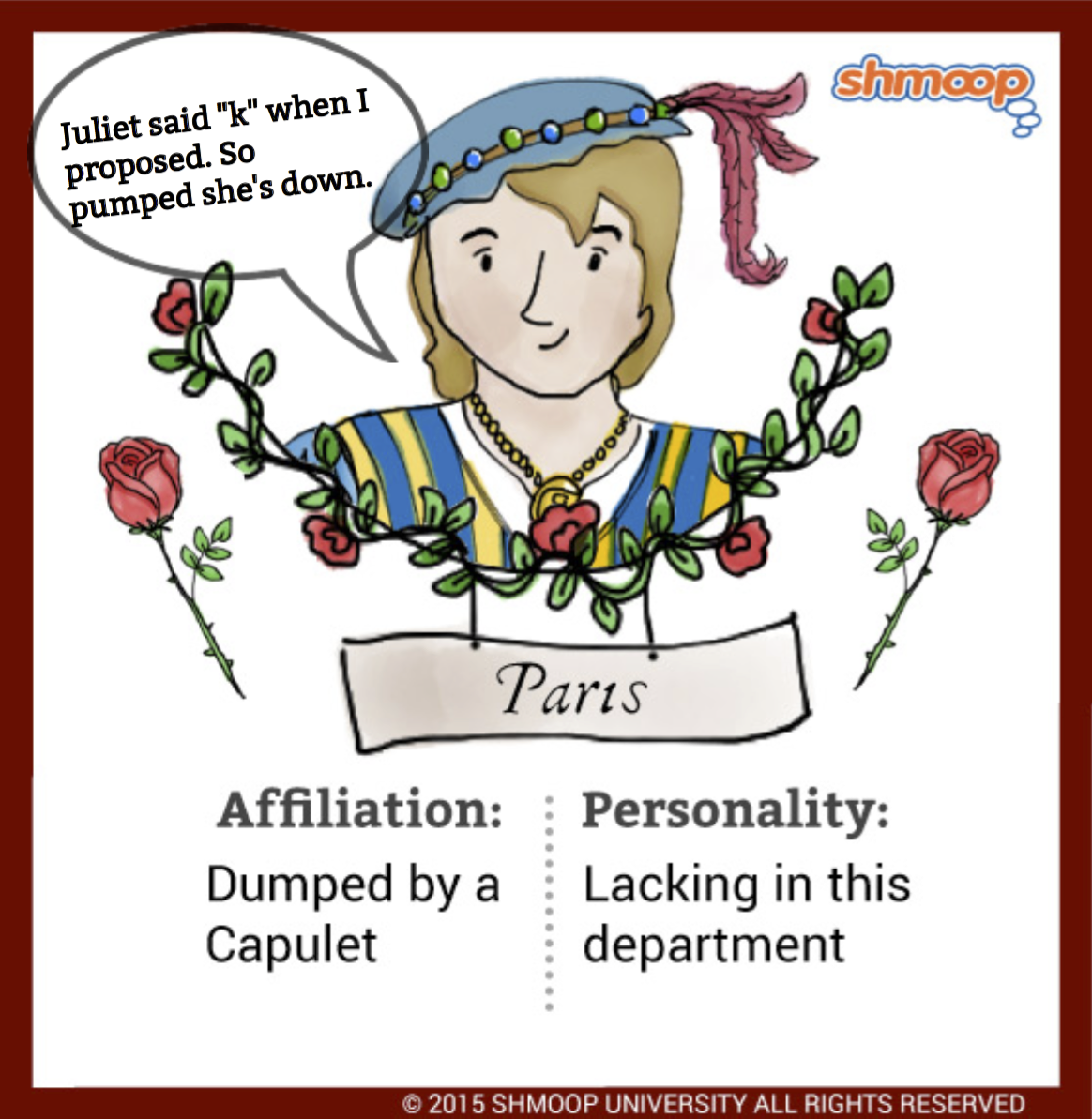 All you have to do to see why Paris (the guy who wears down Juliet's dad until he agrees to let him marry Juliet) is such a good foil for Romeo—and why Juliet chose Romeo over him—is to contrast what Paris and Romeo each say outside Juliet's grave:

The obsequies that I for thee will keep
Nightly shall be to strew thy grave and weep. (5.3.16-17)

Paris's language says: "I'm a stiff and lacking in passion." Notice how rhythmic and sing-songy his words are? How they rhyme in a tight, closed off, heroic couplet, almost like he Googled "How to mourn your dead fiancée?" Yeah, there's no way that Paris would die for Juliet. He's probably already crossing her name of his "Girls To Marry" list and moving on to next candidate.

The time and my intents are savage-wild
More fierce and more inexorable far
Than empty tigers or the roaring sea. (5.3.37-39)

Romeo is furious over Juliet's death, and eloquent in his fury. He won't drip a few tears on Juliet's grave and then go home to bed. Unlike Paris, this guy is a passionate lover. (Oh, by the way? This isn't Shmoop's idea—and unlike Shakespeare, we like to give credit where credit's due.)

The Play's the Thing

An actor can make Paris seem like a total jerk, or like a sympathetic nice guy who just happened to get caught in somebody else's love story. In Baz Luhrmann's 1996 film Romeo + Juliet, Paul Rudd plays Paris as, well, Paul Rudd: a handsome but undeniably dorky guy. (Paul Rudd, call us!) His dance with Juliet at the Capulet ball is very awkward—he starts swing dancing a little—and Juliet keeps looking at Romeo and making "this is awkward" faces. (We should point out that in Shakespeare's text, Paris doesn't actually show up to the Capulet ball as expected.)

Paris's dialogue with Juliet in Friar Laurence's church can make him seem either a little clueless or a complete fool. Paris thinks Juliet is upset over Tybalt's death—he has no idea that she's already married to Romeo and that the prospect of marrying him makes her physically ill. It's easy to make some of Paris's lines seem overbearing and arrogant. He greets her with the cringe-worthy, "Happily met, my lady and my wife" (4.1.18).

Later, when he looks at Juliet more closely, he tells her, "Poor soul, thy face is much abused with tears" (4.1.30). Just when we're aww-ing about how sweet that sounds, she tells him that her face was bad enough to begin with and he reprimands her with, "Thy face is mine, and thou hast slandered it" (4.1.36). Hmm, sounds like someone has a real sense of ownership toward his fiancée. His possessive attitude towards Juliet—especially laying claim to her face as his own—could come across as creepy, spoiled, and chauvinistic.

Unless, that is, an actor plays these lines as earnest and well-meaning. Paris, after all, has no reason to believe that Juliet doesn't love him and isn't excited about their marriage. In this interpretation, Paris's confidence in their marriage comes across as pathetic rather than obnoxious. Either way, though, the "holy kiss" that Paris gives Juliet at the end of the scene is painful for everybody. Seriously, it's so formal and stiff that we almost can't bear to watch it—which is basically how we feel about all of Paris's scenes.