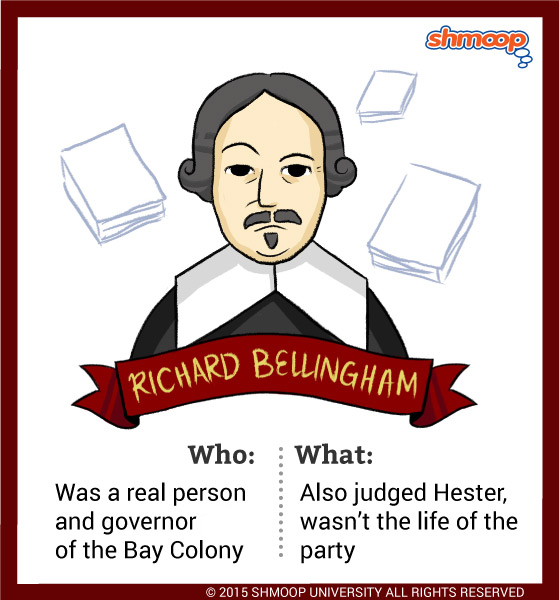 Richard Bellingham actually did serve as governor of the Massachusetts Bay Colony on multiple occasions: 1641 to 1642, 1654 to 1655, and 1665 to 1672. Because he's a historically real person, however, he helps make the book seem real. He supports the whole "oh, I discovered this crazy story in the archives" shtick that the narrator sets up in the "Custom House" preface.

As a character, he doesn't have much of a role in the book, appearing in the beginning with the group of men who mete out Hester's punishment and again when Hester needs to find out whether the town leadership plans to take Pearl away from her. The narrator has a kind of grudging respect for him:

He wore a dark feather in his hat, a border of embroidery on his cloak, and a black velvet tunic beneath—a gentleman advanced in years, with a hard experience written in his wrinkles. He was not ill-fitted to be the head and representative of a community which owed its origin and progress, and its present state of development, not to the impulses of youth, but to the stern and tempered energies of manhood and the sombre sagacity of age; accomplishing so much, precisely because it imagined and hoped so little. (3.17)

In other words, he's good at his job—he pays the bills and always returns his library books on time—but he's not exactly the life of the party.