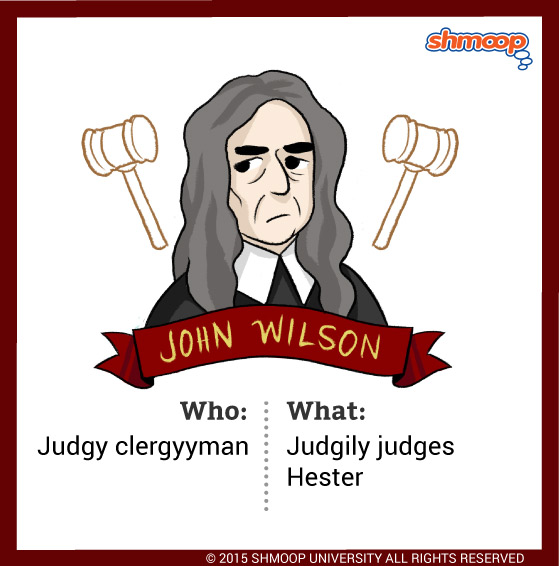 The Reverend Wilson is among the men who judge Hester Prynne at the beginning of the book. We'll let the narrator introduce him:

[he was] the eldest clergyman of Boston, a great scholar, like most of his contemporaries in the profession, and withal a man of kind and genial spirit. This last attribute, however, had been less carefully developed than his intellectual gifts, and was, in truth, rather a matter of shame than self-congratulation with him. There he stood, with a border of grizzled locks beneath his skull-cap, while his grey eyes, accustomed to the shaded light of his study, were winking, like those of Hester's infant, in the unadulterated sunshine. He looked like the darkly engraved portraits which we see prefixed to old volumes of sermons, and had no more right than one of those portraits would have to step forth, as he now did, and meddle with a question of human guilt, passion, and anguish. (3.18)

The main thing we learn from this little paragraph is that this guy has no more idea of love or passion than an old picture—so maybe he shouldn't be so quick to judge a lonely young woman.

Previous Next
More on The Scarlet Letter Navigation