Doctor Manette in A Tale of Two Cities 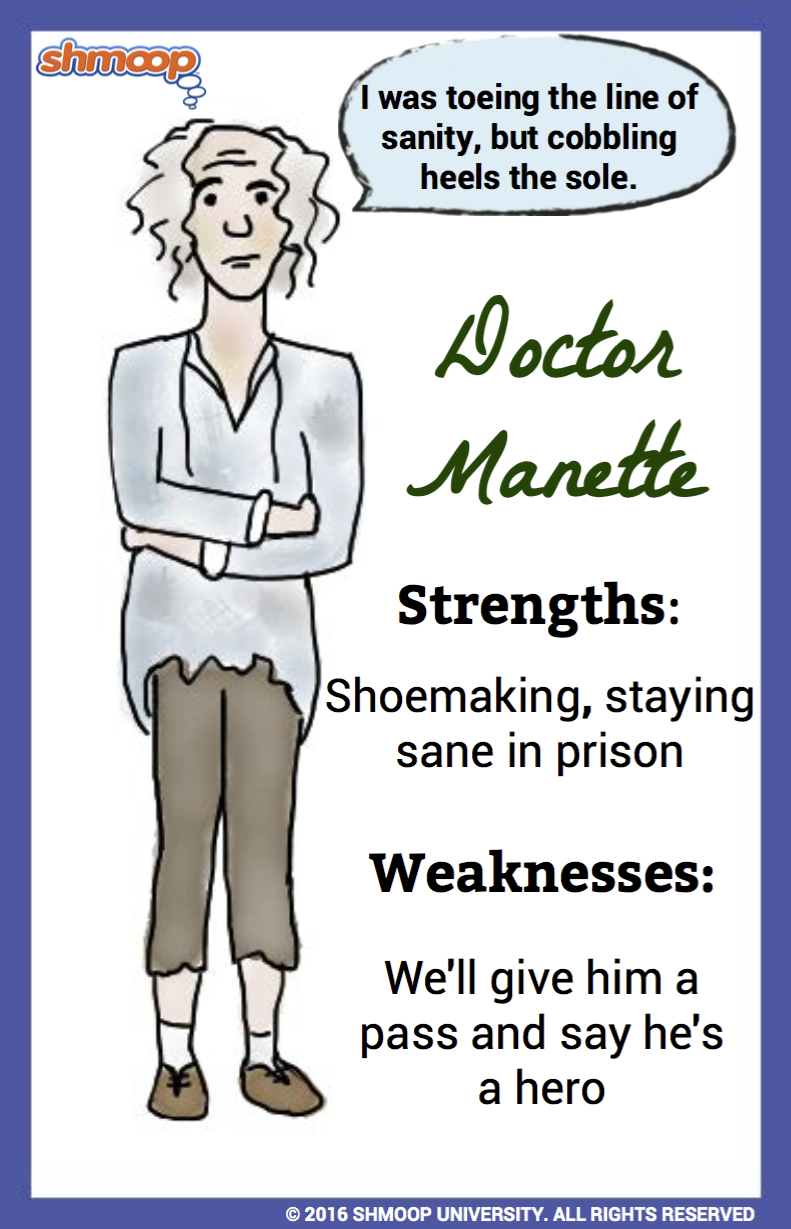 In 1757, Doctor Alexandre Manette is a fine, upstanding doctor with a thriving practice and a loving wife and daughter. One traumatic week later, he’s a prisoner in La Bastille.

Eighteen years later, he’s a broken man. Left to rot in solitude as "Prisoner 105, North Tower," Doctor Manette soon forgets everything that he once was. Clearly, this doesn’t happen because the guy’s weak: Dickens dwells on the psychological trauma of his unfair imprisonment from the moment we meet him. Trying desperately to hang on to his mind while he’s in prison, Doctor Manette begins to cobble shoes.

Lucie and Mr. Lorry find the doctor hunched in a corner of Defarge’s house, cobbling shoes as if the world’s going to end. Through Lucie’s ceaseless devotion, Doctor Manette is "recalled to life." It’s actually not a figurative term: Dickens wanted his audience to see just how debilitating prison was. He should know: his father spent several years in debtor’s prison when Dickens was a boy. It scarred the author for life.

In fact, if there’s an unsung hero in this novel, we cast our votes for it being Doctor Manette. Dickens explores the fears and agonies of post-traumatic stress with searing realism. The doctor, we’re given to understand, is a strong man. But even the strongest of man, we learn, can break. It’s a daily struggle for him to move past the terror of solitary confinement, of being one of the "living dead":

Into his handsome face, the bitter waters of captivity had worn; but, he covered up their tracks with a determination so strong, that he held the mastery of them even in his sleep. A more remarkable face in its quiet, resolute, and guarded struggle with an unseen assailant, was not to be beheld in all the wide dominions of sleep, that night. (2.17.41)

Dickens makes no bones about it: Doctor Manette is a hero. In some ways, Doctor Manette serves as a warning story for the rest of the novel. Okay, some differences exist between his situation and Charles' (or the rest of the prisoners of the Republic). He was imprisoned by aristocrats, the Evrémondes, who didn’t want him to speak out against their crimes. Charles becomes imprisoned by patriots who want to avenge the damages caused by the very aristocrats who imprisoned Doctor Manette. Huge differences, right? Well, officially, yes. But as we begin to see, the consequences of unfair imprisonment are horrific. It doesn’t really matter whom you’re imprisoned by.

Doctor Manette’s ultimate strength, however, comes in his ability to separate the actions of individuals from those of larger groups of people. Where the French patriots determine that "all the race" of the Evrémondes should be "exterminated," Doctor Manette realizes that Charles should bear no responsibility at all for the crimes of his father. He allows Charles to marry Lucie and commits himself whole-heartedly to Charles' rescue when the Republic takes him away. Dickens doesn’t gloss over Doctor Manette’s struggles. He also doesn’t allow those struggles to stand in the way of a man of conscience. In our opinion, we need more guys like Doctor Manette around.

Why, then, isn’t Doctor Manette the shining star of this novel? We’re guessing that Dickens doesn’t really want this novel to be about heroes. He’s focused more on acts of compassion and even heroism. Letting go of Lucie and letting Charles into his life becomes the measure of Doctor Manette’s strength. He may not be a traditional hero, but he sure gets props for his sympathy for others.