Lucie Manette in A Tale of Two Cities 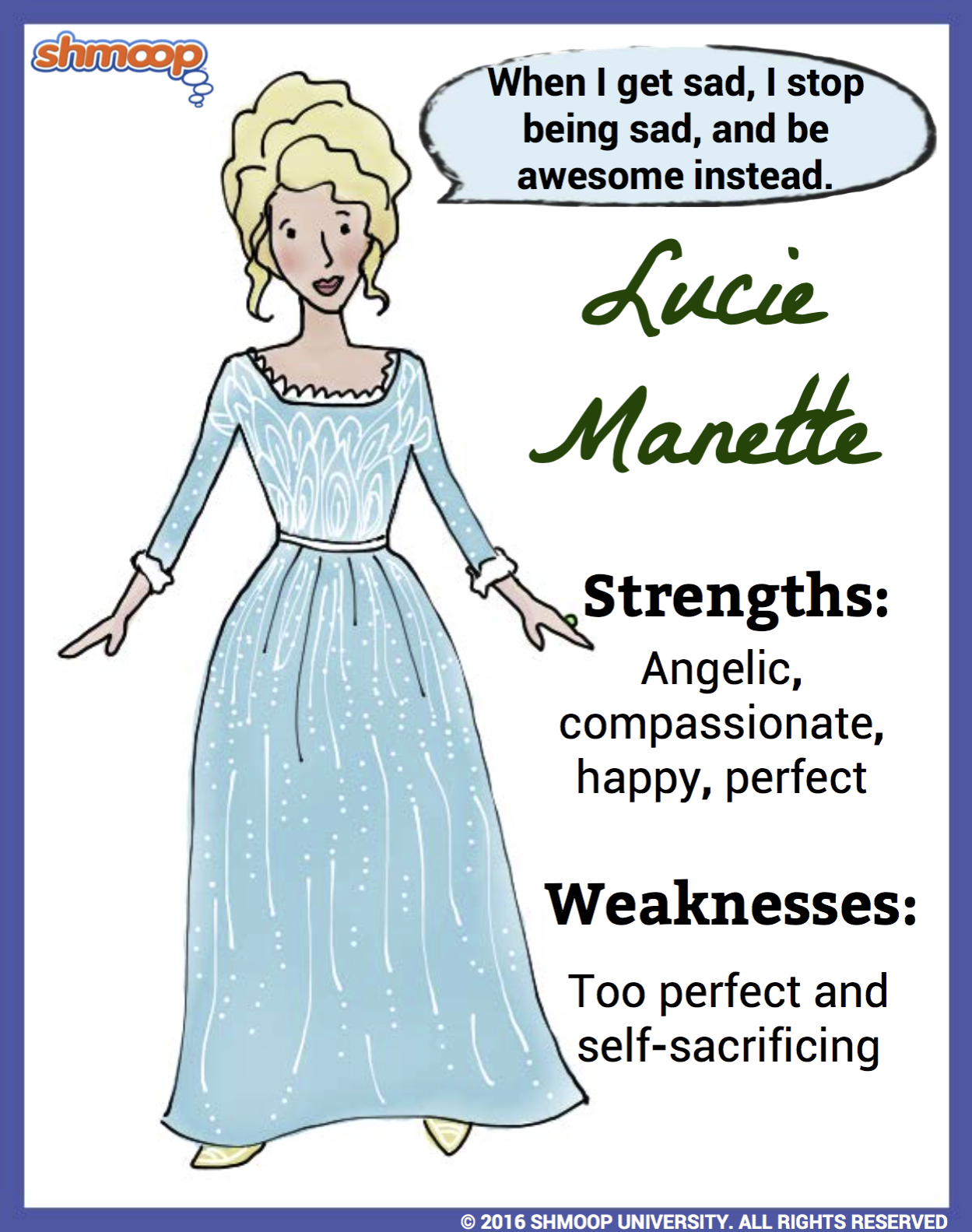 Golden-haired, blue-eyed, and altogether divine, Lucie Manette looks like an angel. In fact, she happens to act like one, too. At the tender age of eighteen, she is asked to devote her life to a father whom she’s never met. Lucie spends approximately 2.7 seconds worrying about whether or not this is a good idea.

After that, however, she quickly gives herself over to her father's well-being. As our narrator remarks, Lucie "was the golden thread that united him to a Past beyond his misery, and to a Present beyond his misery: and the sound of her voice, the light of her face, the touch of her hand, had a strong beneficial influence with him almost always" (2.4.3). Guiding her father out of madness and into the world again through the sheer strength of her love, Lucie becomes the poster child for tenderness and female self-sacrifice.

The Angel in the House

As Dickens makes clear over and over again, Lucie’s place is in the home. Believe us, she’s really good at home-making. When she and her father move into a tiny house in Soho, she manages to transform it into a veritable haven:

Although the Doctor's daughter had known nothing of the country of her birth, she appeared to have innately derived from it that ability to make much of little means, which is one of its most useful and most agreeable characteristics. (2.6.16)

Importantly, she’s a girl with good taste… but she’s thrifty, too. Basically, she’s as good as it gets. Perhaps that’s why Sydney, Charles, and even Mr. Stryver fall madly in love with her.

Once Lucie marries Charles, however, she sets up shop as a homemaker in earnest:

Ever busily winding the golden thread that bound them all together, weaving the service of her happy influence through the tissue of all their lives, and making it predominate nowhere, Lucie heard in the echoes of years none but friendly and soothing sounds. Her husband's step was strong and prosperous among them; her father's firm and equal. (2.21.2)

Interestingly, with all the weaving that Lucie’s doing, she almost vanishes out of view altogether. Her husband’s footsteps echo in the chapter. Her father’s voice comes in loud and clear. Heck, even Miss Pross makes a special appearance. Lucie, however, almost vanishes out of sight. It’s as if she’s an invisible presence in the house, aiding all the people she loves without ever imposing her own desires on their lives. As Charles remarks,

With all this homemaking and self-sacrificing, Lucie sounds a heck of a lot like "the angel in the house." In Victorian England, this term referred to the ideal woman: faithful, devoted, submissive, competent, and, above all, invisible, "the angel in the house" supported all those she cared about without ever making herself the star of the show.

Sound appealing? We didn’t think so.

Why Can’t We Think With Lucie?

Lucie only speaks the language of the home. When she begs Madame Defarge to spare her husband, she does it "as a wife and a mother." Lucie, it seems, can’t begin to imagine the political or social stakes of the game in which her husband’s landed. She can’t meet Madame Defarge on equal ground—largely because she’s never had to think about anything but domestic concerns.

For Dickens, of course, that’s a good thing. Despite the terror and the bloodshed that surround her, Lucie remains innocent. She goes upstairs while the grindstone sharpens bloody axes and swords into weapons of war. She faints before she has any chance to stop Sydney from exchanging his own life for her husband’s. She’s already on her way to England when Miss Pross acts as her proxy in killing Madame Defarge.

For contemporary readers, however, Lucie may seem just a little too good to be true. Sure, she’s a loving wife and daughter, but can she even imagine that Madame Defarge could also be a loving sister? Or even a political ally? Critics have suggested that Lucie becomes a victim of our times: Victorian readers might have seen Lucie as an ideal woman. Contemporary readers are often inclined to see her as anything but that.

One way of reclaiming some sort of depth for Lucie’s character, however, might be to look at her relationship with Sydney. Lucie’s deep sympathy for Carton’s pain doesn’t cloud her realism: she couldn’t ever marry the man herself. Despite this, she becomes a fierce defender of Sydney’s hidden strengths. We have to give Lucie credit—she knows exactly how lucky she is. She’s happy. Not everyone can say that. And she recognizes that happiness comes with its own peculiar set of responsibilities, including sheltering those who might be less happy than she is.