The Narrator in The Tell-Tale Heart

Our narrator is such a wreck, it's hard not to feel sorry for him. He's nervous ("very dreadfully nervous"), paranoid, and physically and mentally ill. He doesn't know the difference between the "real" and the "unreal," and seems to be completely alone and friendless in the world. We suspect that he rarely sleeps.

Maybe this explains why he doesn't share his name, or any other identifying characteristics. He wants us to know what he did, but not where to find him. We actually have precious little to go on in discussing his character, and we have to do lots of investigation and reading between the lines to come up with possibilities.

Poe wrote a famous story called "The Imp of the Perverse." In this story the narrator claims that people are driven to murder—and other acts that are destructive to the self and others—due to perverse and uncontrollable impulses. Most of his works explore this idea to some degree.

The Oxford English Dictionary Online provides two helpful definitions of perverse: "a) contrary to what is morally right or good; wicked, evil, debased. b) contrary to an accepted standard or practice; incorrect, mistaken, wrong; (of an argument, interpretation, etc.) unjustifiable, contradictory, distorted."

Say, for example, we believe the narrator's contention that he wants to kill the old man simply to be free of the power of his eye. For the sake of argument let's assume that it would be very difficult to leave the old man, and that killing him was the only way to escape his eye. Even under those circumstances, the narrator still seems abnormal and frightening because seems to enjoy spying on the old man for the eight nights prior to the murder, as we see in these lines:

I could scarcely contain my feelings of triumph. To think that there I was, opening the door, little by little, and he not even to dream of my secret deeds or thoughts. (4)

If he wants to kill the man for "practical" reasons, why does he go through such an elaborate and creepy process? And why does he take such pleasure in it? Can we chalk this up to perverse impulse? Could he simply be plagued by "the Imp"? Or must all "perverse" deeds stem from a logical, reasonable cause? These are the kinds of questions the narrator provokes.

A Man With Tinnitus

If you do a web search for "ringing ears" or "hyper sensitive ears," you'll get results for tinnitus, a condition which can cause auditory hallucinations, intense sensitivity to sound, and possibly amplified hearing. (You can read more about tinnitus on the American Tinnitus Association website.) This disorder sounds an awful lot like the "disease" the narrator says he has, though the narrator's case is rather extreme:

[N]ow, I say, there came to my ears a low, dull, quick sound, such as a watch makes when enveloped in cotton. (6)

The American Tinnitus Association website states that tinnitus can be caused by many factors, including tumors, sinus infections gone bad, overly loud noises, and "misaligned jaw joints or jaw muscles." Since the narrator doesn't reveal his pre-disease past, we can't really use any of that to understand him.

But, we can entertain the claim that his intensified hearing is a result of physical illness, rather than mental illness. But who knows? Maybe he's plagued, not just by Poe's famous imp of the perverse, but by an aggravating ringing.

Poe is often considered a "Southern Gothic" author; that is, an author whose work deals with issues and anxieties over slavery and the history of slavery in the southern United States. Poe was actually born in Boston, Massachusetts, but moved to the South at a young age and spent much time there. He died in 1849, and slavery was legal in the U.S. throughout his lifetime.

Toni Morrison wrote a book called Playing in the Dark: Whiteness in the Literary Imagination. In it, she argues that many Poe stories, most notably "The Black Cat," are part of the Southern Gothic tradition in that they express anxiety over the institution of slavery, though in a veiled, hidden, or coded fashion.

Does "Tell-Tale" belong in this category? Do you think that it's possible that the narrator is a slave and the old man his owner?

Although Caucasians aren't the only people with blue eyes, for the sake of argument, let's use that detail about the old man to assume he is white. This is the one bit of color in the story, and the only detail we are given as to any character's physical appearance. If the narrator is a slave, this blue eye might have looked on him with an air of possession, dominance, and perhaps even disgust. To kill the old man would be to eradicate the old man's feelings of superiority:

I made up my mind to take the life of the old man, and thus rid myself of the eye forever. (2)

This interpretation would also explain the narrator's nervousness. As a slave, this sensitive guy could have been exposed to all kinds of horrors and would have lived in fear. It could also explain why the narrator took so much pleasure in violating the man's privacy and the sanctity of his bedroom—as a slave he would have had precious little privacy:

To think that there I was, opening the door, little by little, and he not even to dream of my secret deeds or thoughts. (4)

Unlike "The Black Cat," this story doesn't fit neatly in the Southern Gothic, but it doesn't hurt to ask this question: if the narrator is a slave and the old man his master, would this change the way you feel about the narrator and/or the old man? If so, how? If not, why not?

The narrator seems completely hopeless, a bundle of nerves and murderous impulses, and extreme sensory perception. Can we imagine a scenario in which he is well? We know that he is tortured by the murder he committed, even as he claims to have enjoyed it.

Yet, he's the one telling the story, perhaps out of some hope for redemption or out of some hope for a cure to what he considers a physical disease. In Fyodor Dostoevsky's Crime and Punishment, the main character also murders an elderly person for shifty reasons, yet, he attains some kind of happiness at the end of the book. Can we envision any scenario in which the narrator could find happiness, or even love? If so, why do you think this? If not, why is he hopeless? 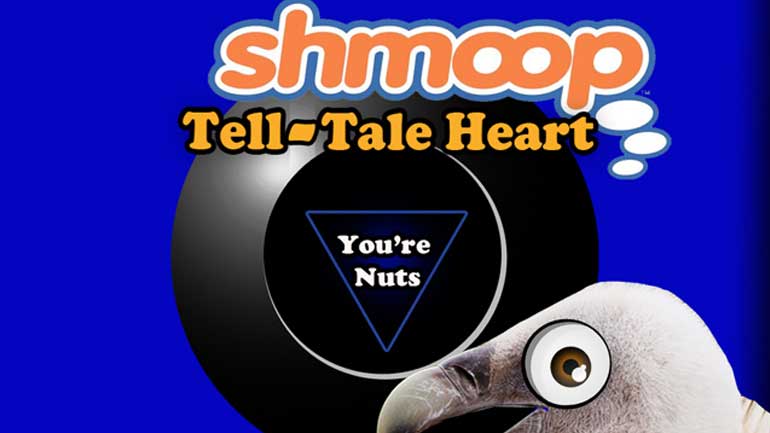