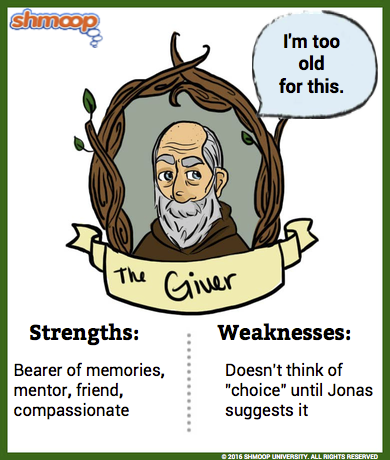 Um, Can We Return This Gift For Credit?

The Giver is a little bit of a mystery man. Scratch that—at the beginning of the book he's totally a mystery man. And not a suave James Bond-type, either. A weird old dude with a bunch of books and more haunting imagery rattling around in his brainpan than Edgar Allan Poe.

He's a bunch of contradictions rolled into one. Mr. Giver appears older than he really is... because of the weight of the memories that he keeps. He seems completely isolated... but we find out he had an intense emotional connection to the girl he calls his "daughter," Rosemary. To Jonas, he is a strange mix of mentor, grandfather, friend, and even accomplice.

It's this "accomplice" bit that's particularly interesting to look at when we talk about The Giver. The Giver seems for the most part resigned to his role:

"But why can't everyone have the memories? I think it would seem a little easier if the memories were shared. You and I wouldn't have to bear so much by ourselves, if everyone took a part."

The Giver sighed, "You're right," he said, "But then everyone would be burdened and pained. They don't want that. And that's the real reason The Receiver is so vital to them, and so honored. They selected me – and you – to lift that burden from themselves." (14.46-47)

He's accepted that his job is to bear the memories, deal with the suffering, live in isolation, and, for the most part, be unable to change anything significant in the community. So, when he suddenly decides to help Jonas run away and bring the power back to the people, so to speak, we're a little bit surprised.

Whether or not this little switcheroo is warranted is a solid question to ask when talking about The Giver. Does it feel like The Giver really is capable of such a decision, or does it feel like Lowry had to do something radical to move the plot along, and this was as good as any?

In the text, The Giver seems to have a sudden "What if?" moment when Jonas suggests that he could help the citizens through the pain of the memories. It looks like The Giver's hesitation until now has been due to compassion and concern. He knows how much the memories hurt, and he doesn't want to inflict that pain on the community. But Jonas suggests that the old man has the power to heal the pain that the memories would cause. He can bring choice and freedom to the community without cutting off its ability to function. This convinces The Giver to give it a shot.

Or maybe it really was a shameless plot device. You can be the critic here.

Previous Next
More on The Giver Navigation