Atticus Finch in To Kill a Mockingbird

You know all those stereotypes about lawyers being nasty, money-grubbing people? Well, meet Atticus, giving lawyers (and dads) a good name since 1960. If you read this and thought that he was too good to be true—you're right. He's fictional. But we sure wish he weren't. 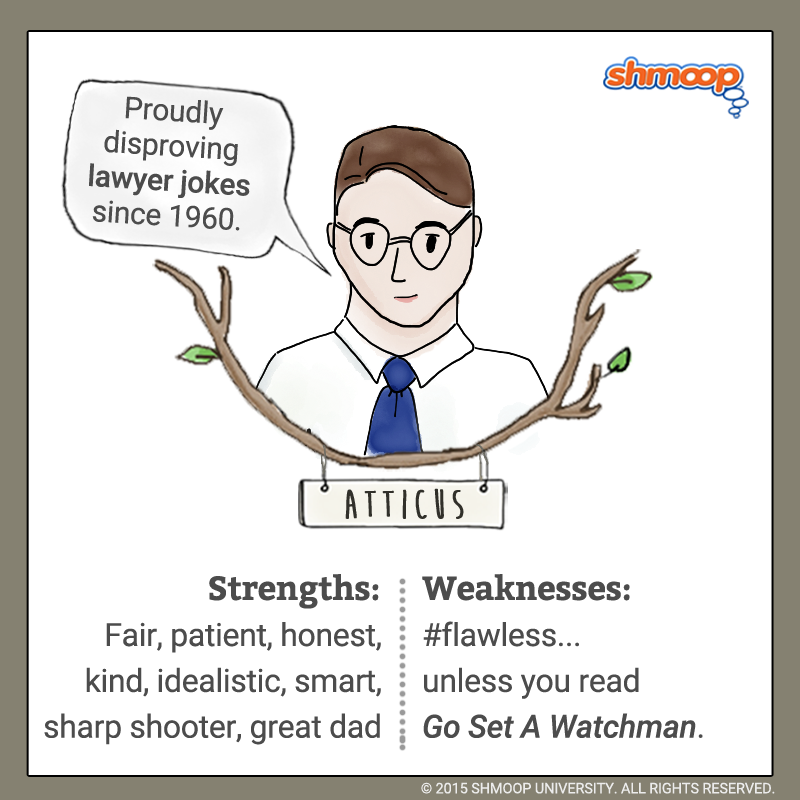 Neither of the Finch kids ever calls their father "Dad"; he's always Atticus. Weird, right? Especially for kids in the rural South. But we get the feeling that it's their way of showing him respect, just like he shows them respect. For one thing, he doesn't dumb down his language to what he thinks is their level, but he also is willing to explain patiently whenever they have questions.

"I'm afraid our activities would be received with considerable disapprobation by the more learned authorities."

Jem and I were accustomed to our father's last-will-and-testament diction, and we were at all times free to interrupt Atticus for a translation when it was beyond our understanding.

When Scout doesn't want to go back to school, Atticus doesn't just tell her that she has to go and that's that; instead, he listens to Scout's explanation of why she's upset, and tries to make her see her teacher's side of things before coming up with a compromise that makes Scout happier.

The passage above also suggests that Atticus's courtroom language creeps into the way that he talks to his kids, and so does his judicial concern with fairness. As Scout tells Uncle Jack, "When Jem an' I fuss Atticus doesn't ever just listen to Jem's side of it, he hears mine too" (9.46). Scout also tells Miss Maudie, "Atticus don't ever do anything to Jem and me in the house that he don't do in the yard" (5.53). Atticus runs his family like a judge: he's the one in charge, and has a clear set of rules that he expects his kids to follow, but he makes sure that both sides have their say.

Atticus doesn't expect his kids to respect him just because he's their father, but because he acts in a way that deserves respect. His honesty with his children means that they trust him, and look to him for guidance. 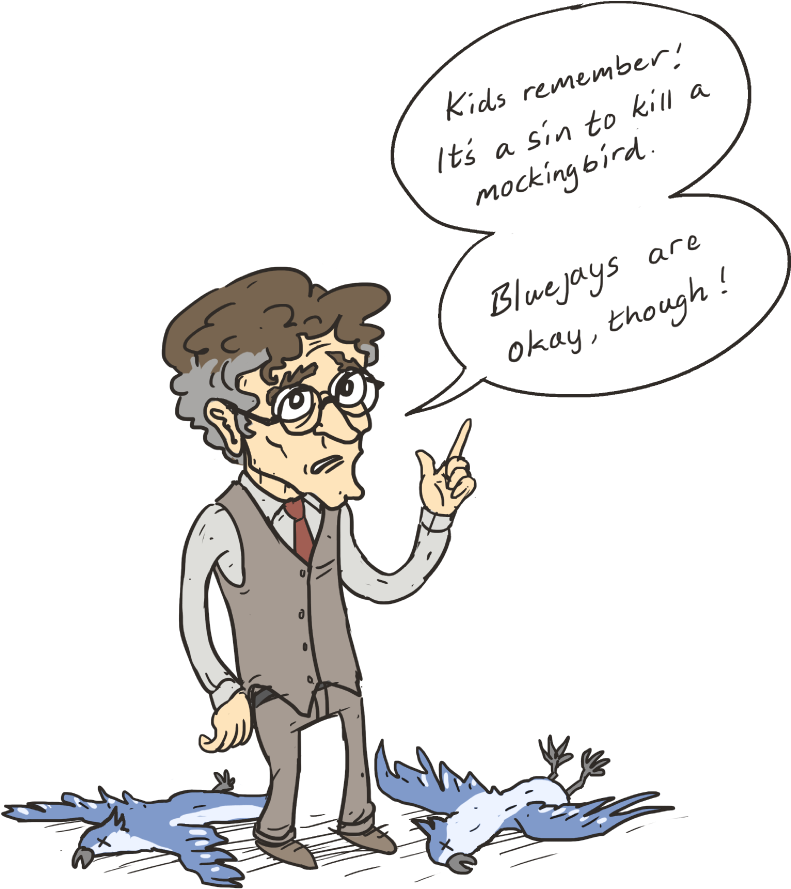 In a group of neighbors, Atticus was standing with his hands in his overcoat pockets. He might have been watching a football game. Miss Maudie was beside him.

Atticus is the opposite of a hypocrite: he says what he means, and lives how he thinks. In raising his children, he tries to get them to understand not only how they should behave, but why they should behave that way. This parenting attitude works most of the time, but causes problems when the kids apply Atticus's principles in ways he doesn't expect.

We were accustomed to prompt, if not always cheerful acquiescence to Atticus's instructions, but from the way he stood Jem was not thinking of budging.

Jem shook his head. As Atticus's fists went to his hips, so did Jem's, and as they faced each other I could see little resemblance between them: Jem's soft brown hair and eyes, his oval face and snug-fitting ears were our mother's, contrasting oddly with Atticus's graying black hair and square-cut features, but they were somehow alike. Mutual defiance made them alike. (15.97-99)

Just as Atticus is standing by Tom to protect him, Jem wants to do the same for Atticus. While Atticus isn't scared of the mob for his own sake, he is afraid that they'll hurt his kids. In the end, however, it's Scout's following her father's advice (talking to people about what they care about) that gets them out of their fix. While Atticus tries through his parenting to save his kids from Maycomb's intolerance, he's also giving them the same ideas that lead to him facing off with a mob and receiving death threats.

So, is he protecting his kids, or putting them in danger?

Well… yes. To both questions. Atticus believes that shielding his kids in the short term doesn't do them any favors in the long run. This becomes especially clear when he thinks Jem is the one who stabbed Bob Ewell.

"Thank you from the bottom of my heart, but I don't want my boy starting out with something like this over his head. Best way to clear the air is to have it all out in the open. Let the county come and bring sandwiches. I don't want him growing up with a whisper about him, I don't want anybody saying, 'Jem Finch... his daddy paid a mint to get him out of that.' Sooner we get this over with the better." (30.34)

Atticus would rather his son underwent the momentary discomfort and risk of being open about his "crime" than face a lifetime of second-guessing. This is, after all, the way he himself lives, doing right by Tom Robinson and getting called a few names (and, uh, having his kids attacked) rather than suffer the shame of having supported injustice.

While Atticus holds his kids to the same high standards as he holds himself, he's there for them when they need him. Check out the very last sentence of the book: "He turned out the light and went into Jem's room. He would be there all night, and he would be there when Jem waked up in the morning" (31.56).

Even when Jem's unconscious and has no way of knowing what's going on, Atticus is there for him—because it's the right thing to do, even if no one's watching? That would fit with what we know about Atticus, but perhaps there's a simpler reason: love.

Of course Scout's dad has the be the one honest lawyer in, well, maybe the whole South. And it sure causes his family a lot of grief. Atticus tries to explain to Scout why he's doing what he's doing in this case.

"If you shouldn't be defendin' him, then why are you doin' it?"

"For a number of reasons," said Atticus. "The main one is, if I didn't I couldn't hold up my head in town, I couldn't represent this county in the legislature, I couldn't even tell you or Jem not to do something again. […] Scout, simply by the nature of the work, every lawyer gets at least one case in his lifetime that affects him personally. This one's mine, I guess." (9.16-21)

For Atticus, being a lawyer isn't just a job, it's a personal commitment to justice, and to solving problems through the law rather than through violence. (Hint, hint, Scout.) Oh, also, he had no choice: Judge Taylor assigned him to the case.

"Lemme tell you somethin' now, Billy," a third said, "you know the court appointed him to defend this n*****." "Yeah, but Atticus aims to defend him. That's what I don't like about it."

This was news, news that put a different light on things: Atticus had to, whether he wanted to or not. I thought it odd that he hadn't said anything to us about it—we could have used it many times in defending him and ourselves. He had to, that's why he was doing it, equaled fewer fights and less fussing. But did that explain the town's attitude? The court appointed Atticus to defend him. Atticus aimed to defend him. That's what they didn't like about it. It was confusing. (16.92)

Why doesn't Atticus tell Scout this, when it could have given her a good excuse to get out of fights? Well, for one, it's not really an excuse. The problem isn't that he's defending Tom, but that he's planning on doing it to the best of his ability. (Most people in the town think fair trials are only for white people.) But we think Atticus doesn't mention it because he doesn't want Scout to defend him with a cop-out. Maybe Atticus was appointed, but he also thinks it's the right thing to do.

And Atticus chooses not only to really defend Tom, rather than kinda-sorta defending him, but also to treat even the horrible Ewells with respect in court. Dill notices that Mr. Gilmer doesn't return the compliment for Tom:

"Well, Mr. Finch didn't act that way to Mayella and old man Ewell when he cross-examined them. The way that man called him 'boy' all the time an' sneered at him, an' looked around at the jury every time he answered-" (19.163)

Mr. Gilmer is willing to use any tools at his disposal to win his case, including taking advantage of the jury's racism. Atticus, on the other hand, appeals to the jury's sense of justice and equality. If the roles were reversed, if Atticus had been assigned the prosecution instead of the defense, would he have acted any differently? Would he have even taken the case? What part of Atticus's character does Mr. Gilmer lack, to make him able to act so differently from his legal opponent?

Proud to Be an American?

In the end, Atticus stands for truth, fairness, and—he hopes—the American legal system. He says as much in his closing remarks:

"I'm no idealist to believe firmly in the integrity of our courts and in the jury system—that is no ideal to me, it is a living, working reality. Gentlemen, a court is no better than each man of you sitting before me on this jury. A court is only as sound as its jury, and a jury is only as sound as the men who make it up. I am confident that you gentlemen will review without passion the evidence you have heard, come to a decision, and restore this defendant to his family. In the name of God, do your duty." (20.52)

For Atticus, Tom's trial means more than the fate of a single man. It even means more than a referendum on racism in Maycomb. The case is about the fairness of the American legal system, which means it's about the fairness of American people. In his closing remarks, Atticus argues for big principles like equality and duty, but he doesn't for a moment lose sight of the fact that in the end it's human beings and their choices that make equality stand or fall—and in this case, fall.