Jeremy Atticus Finch (Jem) in To Kill a Mockingbird

Dill may be the brains behind the Finch kids' early attempts to draw out Boo Radley, but Jem is the one who takes action. He's the one who overcomes his fear to run up and touch the Radleys' front door, fiddles with the fishing pole to try to leave a note on Boo's windowsill, and spearheads the midnight raid on the Radley Place.

Why does Jem want to see Boo so badly? Because he's a mystery right before their eyes, like the ones in the books he read? Or maybe it's all a game? After all, it's Jem who comes up with the idea of acting out Boo's life, and takes on the starring role himself.

Maybe. But Jem seems to take the Boo boondoggle more seriously than that. When Mr. Nathan cements up the hole in the tree in front of the Radley Place where the kids have been finding treasures, Jem is seriously upset.

Next morning on the way to school he ran ahead of me and stopped at the tree. Jem was facing me when he looked up, and I saw him go stark white.

Someone had filled our knot-hole with cement.

Later Scout sees that Jem himself has been crying. It's not certain that Jem suspects Boo has been the one leaving them gifts, but that would give one reason why Jem is so distressed at having the connection with their Mystery Friend so abruptly cut off. Somehow, for some reason, he actually feels a connection with Boo. 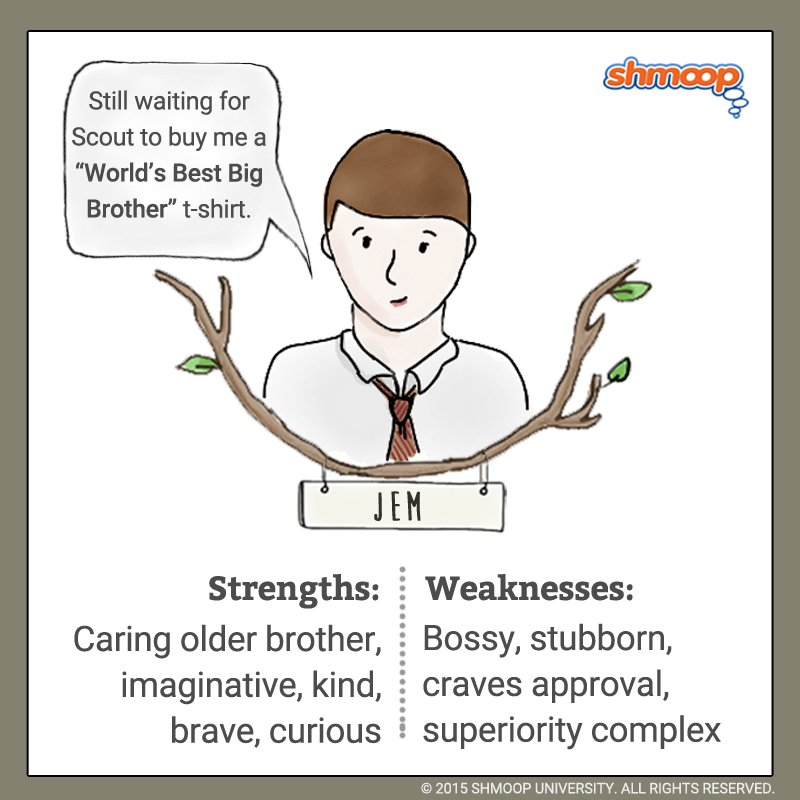 Jem looks out for Scout and—okay, we'll say it—kind of bosses her around. He definitely tries to get her to do what he, in his superior knowledge from being four years older, knows she should do. Asserting Scout's inferiority, as younger and a girl, appears to be one way that Jem boosts his own ego. The Boo Radley play-acting game starts out as one of these ego-boosts.

"I know what we are going to play," he announced. "Something new, something different. […] Boo Radley."

Jem's head at times was transparent: he had thought that up to make me understand he wasn't afraid of Radleys in any shape or form, to contrast his own fearless heroism with my cowardice. (4.82-85)

Scout knows what he's up to, but lets him get away with it. Jem's thoughts aren't always so clear to Scout, and they get more confusing to her as both kids get older. This means that Scout narrates what Jem says and does when he's around her, but she can't always identify what's going on inside his brain.

Jem stayed moody and silent for a week. As Atticus had once advised me to do, I tried to climb into Jem's skin and walk around in it: if I had gone alone to the Radley Place at two in the morning, my funeral would have been held the next afternoon. So I left Jem alone and tried not to bother him. (7.1)

Jem phases into and out of wanting to hang out with Scout; during the "on" periods, he takes on the role of her teacher whether she wants him to or not.

"That's because you can't hold something in your mind but a little while," said Jem. "It's different with grown folks, we-"

His maddening superiority was unbearable these days. He didn't want to do anything but read and go off by himself. Still, everything he read he passed along to me, but with this difference: formerly, because he thought I'd like it; now, for my edification and instruction. (14.41-42)

Is this just Jem asserting his superiority all over again? Or does he want to make sure his sister has as much useful knowledge at her fingertips as possible? Or maybe treating Scout as a child is a way for him to establish himself as a grown-up.

Early in the novel, Jem seems happy to dance around the edges of Atticus's rules.

He still maintained, however, that Atticus hadn't said we couldn't, therefore we could; and if Atticus ever said we couldn't, Jem had thought of a way around it: he would simply change the names of the characters and then we couldn't be accused of playing anything. (5.1)

Like a slick lawyer who follows the letter of the law but violates the spirit, Jem knows that Atticus wouldn't approve of their playacting Boo's life, but hopes he can wriggle out of it through plausible deniability. But when the stakes are raised after the midnight raid on the Radley Place, Jem thinks differently about Atticus finding out about this new torment to the Radleys. Scout thinks a beating from their father is better than risking getting shot by Mr. Radley, but Jem explains why he has to risk it.

I was desperate: "Look, it ain't worth it, Jem. A lickin' hurts but it doesn't last. You'll get your head shot off, Jem. Please..."

While Scout thinks it's better to face your punishment and get it over with, Jem would rather walk through fire than have the shame of giving Atticus a reason to be disappointed in him. (Of course, we find out later that Atticus knew all along, even though he didn't let on—maybe because he wants to give Jem a chance to redeem himself.)

But sometimes Jem's desire to defend Atticus is stronger than wanting his dad's approval. (And Aunt Alexandra says they have no family pride.) Jem's most dramatic failure of gentlemanly behavior is his assault on Mrs. Dubose's camellias after hearing one too many insults from her on Atticus's moral character.

I sometimes wondered exactly what made Jem do it, what made him break the bonds of "You just be a gentleman, son," and the phase of self-conscious rectitude he had recently entered. Jem had probably stood as much guff about Atticus lawing for n*****s as had I, and I took it for granted that he kept his temper—he had a naturally tranquil disposition and a slow fuse. At the time, however, I thought the only explanation for what he did was that for a few minutes he simply went mad. (11.29)

Jem may be able to hold himself back from attacking a person, but faced with an empty porch and a garden full of camellias, he's like someone looking at a sandcastle after the obnoxious kids who built it have left, all SMASH! and RAGE! When Atticus makes him apologize and then serve a punishment, he resists—but then obeys. Atticus's response—putting Jem right back in the situation that got him into trouble in the first place, listening to Mrs. Dubose—shows his trust that Jem will do better in future. And Jem does. 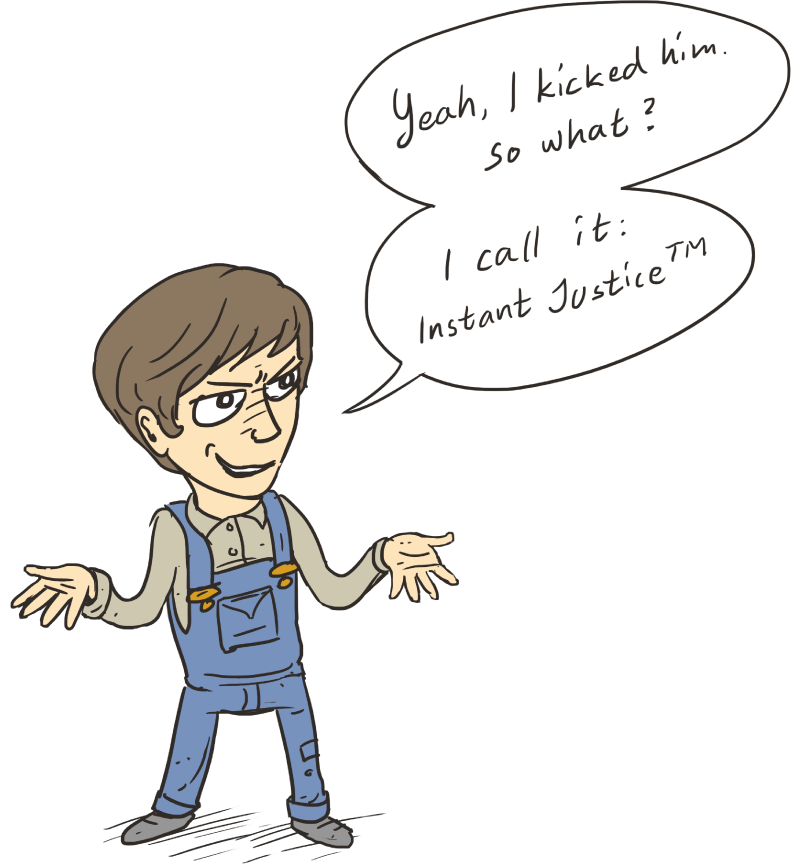 While Jem stops attacking on Atticus's behalf, he does dig in at taking defensive action. At the Maycomb jail on the night the lynch mob shows up, Jem is the one who leads to kids downtown to check on Atticus; while Scout is the first to get them directly involved, Jem flat-out refuses Atticus's command to leave.

We were accustomed to prompt, if not always cheerful acquiescence to Atticus's instructions, but from the way he stood Jem was not thinking of budging.

Jem shook his head. As Atticus's fists went to his hips, so did Jem's, and as they faced each other I could see little resemblance between them: Jem's soft brown hair and eyes, his oval face and snug-fitting ears were our mother's, contrasting oddly with Atticus's graying black hair and square-cut features, but they were somehow alike. Mutual defiance made them alike. (15.96-98)

When he was young, Jem accepted what Atticus wants him to do as what's right. But here, the two sides—right and Atticus—diverge for him. Atticus has taught him to act with honor, but not necessarily with obedience, and here he puts honor first.

You have done well, young grasshopper.

But when Tom Robinson's verdict comes back "guilty," everything changes for Jem. He's been convinced that, based on the evidence, the jury can't possibly convict. When they do, he feels like he's been physically attacked:

The verdict also seems to be a broader attack on things Jem thought were true: that the legal system is just, that innocent men are acquitted, that Maycomb is a community of good, fair-minded people. After the trial, Jem struggles to figure out why people are so eager to divide into groups and hate each other. Scout says that people are just people, but Jem isn't so sure.

"That's what I thought, too," he said at last, "when I was your age. If there's just one kind of folks, why can't they get along with each other? If they're all alike, why do they go out of their way to despise each other? Scout, I think I'm beginning to understand something. I think I'm beginning to understand why Boo Radley's stayed shut up in the house all this time... it's because he wants to stay inside." (23.117)

The Tom Robinson trial makes Jem lose his faith in humanity. Will he ever get it back? Is there a way to acknowledge all the evil people do and be able still leave the house? (Atticus might have something to say about that.) Jem is unconscious for the conclusion of the novel, so he doesn't have the same moment of revelation that Scout does, but perhaps his waking up will also be a kind of rebirth.