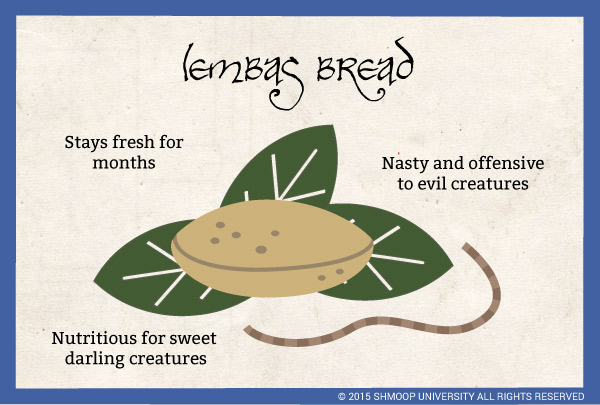 Mostly, lembas bread is a delicious snack. (We like to imagine that lembas tastes something like cinnamon graham crackers. Mmm.) It's a kind of bread made by the elves to sustain them over long journeys, and it keeps Frodo and Sam alive during their long trudge into Mordor. That's lucky, because there aren't exactly healthy eats available in the land of the Enemy.

But while lembas is mostly a practical detail in The Two Towers, it does have one moment of symbolic significance. Near the beginning of their acquaintance with Gollum, Frodo tries to feed Gollum some lembas. He chokes and spits it out:

Gollum cannot stand the taste of the lembas. The problem is that Gollum has grown so twisted that even the touch of elf products—of food made by such good folk—physically hurts him. Lembas may be just a food to Frodo and Sam, but it's a moral trial for Gollum, and it's one he fails miserably. Time to go scrounge some sushi.