Aragorn in The Two Towers 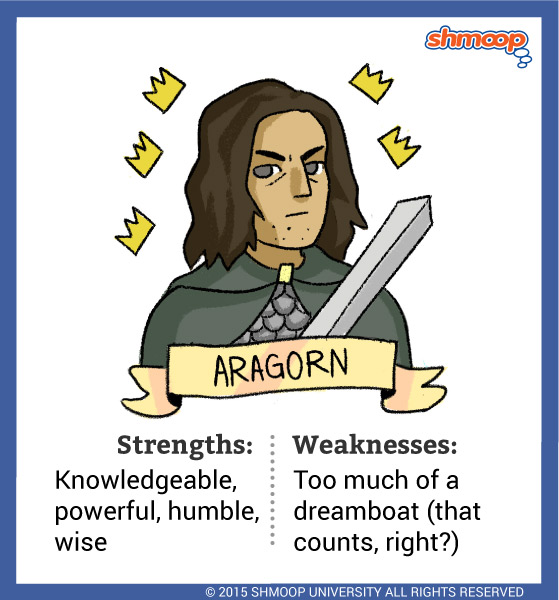 Note: Before we jump into discussing Aragorn in The Two Towers, you might want to take a peek at Aragorn's "Character Analysis" for The Fellowship of the Ring for some background.

In The Fellowship of the Ring, Aragorn (son of Arathorn, heir to the throne of Gondor) spent most of the novel running around looking grubby and answering to the name of "Strider." Now, we don't want to surprise anyone, but the next book is called The Return of the King, and since Aragorn is the heir to the throne of Gondor, we think you can do the math: he's going to be the king mentioned in the title of the last book. So what's the missing link between "Strider" in Fellowship and "Aragorn, High King of Gondor," in The Return of the King?

The Two Towers is the book that bridges the gap between the extremes of The Fellowship of the Ring and The Return of the King. Aragorn spends most of The Two Towers learning how to be a king, and friends, it's a process. He leads Gimli and Legolas on the trail of Merry and Pippin (kidnapped by orcs, of course). Aragorn also gets to help lead King Théoden's men into battle at Helm's Deep (since Théoden is a nice guy, but he's no High King).

And Aragorn's transformation from rough-and-tumble outdoorsy guy in Book One to Leader of Middle-earth in Book Three isn't all happening on the inside. He also gets a lot more attractive and impressive on the outside over the course of the second book. Check out this scene, when Aragorn arrives at the doorway of Meduseld, the king's household in Rohan, to speak with Théoden. The doorman demands that Aragorn leave his sword at the door before he can go in to see the king:

"Here I set [my sword…] but I command you not to touch it, nor to permit any other to lay hand on it. In this elvish sheath dwells the Blade that was Broken and has been made again. Telchar first wrought it in the deeps of time. Death shall come to any man that draws Elendil's sword save Elendil's heir."

The guard stepped back and looked with amazement on Aragorn. "It seems that you are come on the wings of song out of forgotten days," he said. "It shall be, lord, as you command." (3.6.43-4)

Aragorn may not initially look like much, and accordingly, the guard asks him to leave behind his sword just like he would ask any other warrior. But the air of command that basically shines out of him changes that guard's mind in a hurry.

Suddenly, the guard sees Aragorn as a lord of legend, coming "on the wings of song out of forgotten days." (Ah, if only people used that greeting more often.) Aragorn has put that guard in his place, and he's also indicated to us that he's ready to start owning his identity as Isildur's heir. No more of that "Strider" stuff for our Aragorn. He's the bearer of the Sword that was Broken, and he's not going to hide it anymore.

But really, the best example of Aragorn's increasingly obvious awesomeness is Éowyn's instant crush on him the minute she sees him at Théoden's hall. Aragorn has not totally come out yet as the future king of Gondor. Still, his lordliness is starting to peep through his shaggy appearance. So as soon as Éowyn claps eyes on him, she practically faints, seeing him as a "tall heir of kings, wise with many winters, greycloaked, hiding a power that she yet felt" (3.6.72). Swoon. Éowyn knows a king when she sees one, even if he is "hiding a power that she yet felt." The rest of the Rohan court may still have to catch up to Aragorn's all-around excellence, but Éowyn's attraction tips off the reader. It seems our little Aragorn is really starting to come into his own.

Still, if all of these hints that Aragorn is heading towards kingship aren't enough, Tolkien gives us the equivalent of a flashing neon sign that says, Aragorn's Heading to Gondor—Pay Attention, Guys! Galadriel passes on a prophecy to Aragorn (or "Elessar," as she likes to call him—see our discussion of The Green Stone in our The Fellowship of the Ring learning guide for some reasons why):

Where now are the Dúnedain, Elessar, Elessar!
Why do thy kinsfolk wander afar?
Near is the hour when the Lost should come forth,
And the Grey Company ride from the North. (3.5.142)

In other words, Aragorn (a.k.a. Elessar), why are your allies wandering around right now? You guys have to be goal-oriented! You've got a job to do! The Lost are about to come out, and the Grey Company (the Dúnedain, who were Aragorn's original posse) had better be there to make that happen. Galadriel's essentially telling Aragorn that he has to get his act together—that whole becoming-king thing is not far off.

Naturally, we've got to read the next book to find out how this whole Aragorn-king thing pays off, so we can think of the Aragorn plot arc over the course of The Two Towers as basically ramping up our suspense for what will happen in the final entry of the trilogy.