Boromir in The Two Towers 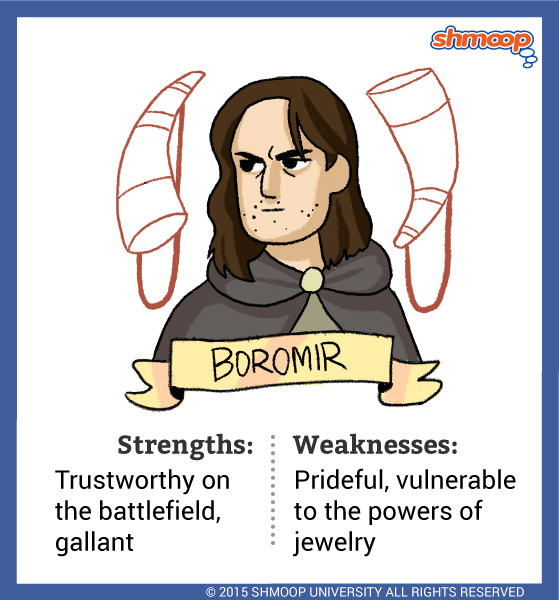 Note: Before we jump into discussing Boromir in The Two Towers, you might want to take a peek at Boromir's "Character Analysis" for The Fellowship of the Ring for some background.

Boromir's real character analysis belongs in The Fellowship of the Ring learning guide. Since he gets horribly killed in the early chapters of The Two Towers, he doesn't have much time to develop new traits for us to discuss.

On the other hand, Boromir spends most of The Fellowship of the Ring turning into an envious traitor who eventually tries to steal Frodo's Ring. It's only in The Two Towers that Boromir redeems himself, proving that he is a great man after all (when he's not being twisted by Sauron's wicked powers). So Boromir may not appear for long in The Two Towers, but he makes a big impression while he's there. And that impression lasts throughout the book.

The thing is, Boromir gets lost in all of his arrogant dreams of using the Ring to save Gondor single-handedly. When he's caught up in dreams of personal glory, his ambition leaves him weak to the Ring. But when he sees poor Merry and Pippin getting attacked by orcs, Boromir remembers what's important. He gives up those pointless dreams and focuses on the here-and-now: if he doesn't try to save Merry and Pippin, who knows what might happen to them?

Boromir fights bravely against the attacking orcs at Amon Hen, finally giving his life to save his friends. His willingness to die for others makes up for his earlier mistake of trying to steal Frodo's Ring. In the end, he comes back to the side of Good, which is a lucky thing, or else—who knows?—he might have wound up as the tenth Nazgûl. Instead, he dies with honor (which may not be a perfect outcome where Boromir is concerned, but at least it has to be better than living as a murderous, evil wraith).

Boromir Passes the Torch to Aragorn

Boromir's death reinforces Tolkien's general message that anyone can find redemption, no matter what they have done (check out our Gollum and Frodo character analyses in all three of the trilogy's learning guides for more on this theme). But it's also important because Boromir's death makes Aragorn start to get serious about returning to Gondor and defending his country as its High King. Check out Boromir's last words to Aragorn:

"Farewell, Aragorn! Go to Minas Tirith and save my people! I have failed."

"No!" said Aragorn, taking his hand and kissing his brow. "You have conquered. Few have gained such a victory. Be at peace! Minas Tirith shall not fall!"

Now, Aragorn spent most of Fellowship running around under the name of "Strider" and telling everyone that he's a Ranger. Even when he joins the Fellowship, he's mostly there to support Gandalf as the leader of their expedition to destroy the Ring. King? Who, me?

But once the Fellowship breaks apart and Boromir dies, Aragorn gains a new focus. Now that he has promised Boromir that "Minas Tirith shall not fall," Aragorn simply has to go to Gondor to keep that promise. In a sad, poignant way, Boromir's death brings Aragorn a step closer to returning to Gondor as its king.

In Book Four of The Two Towers, Boromir's brother Faramir tells Frodo about a vision he saw, of a boat with Boromir's body floating down the River Anduin towards the sea. Faramir comments to Frodo, "Whether he erred or no, of this I am sure: he died well, achieving some good thing. His face was more beautiful even than in life" (4.5.58).

So, if you were still worried, Faramir confirms to Frodo and to the reader that Boromir has definitely redeemed himself. Boromir may have made some mistakes along the way, but he also "died well, achieving some good thing." Boromir passes away as he would have wanted: with honor, defending people. And that's it, folks. Faramir's vision is the last word we get on Boromir's character in The Two Towers.