Frodo Baggins in The Two Towers 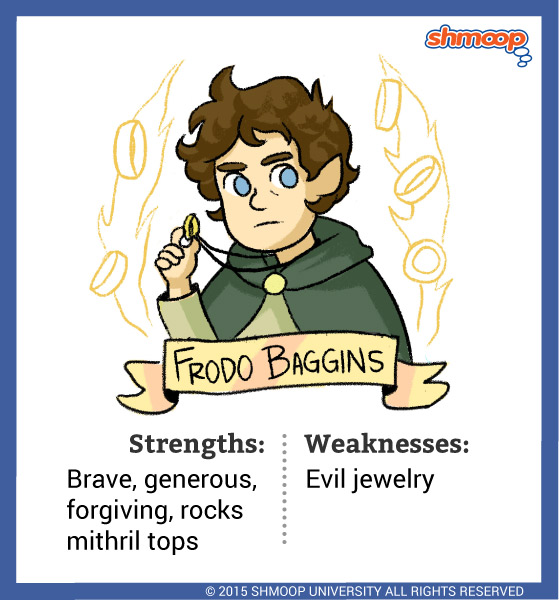 Note: Before we jump into discussing Frodo in The Two Towers, you might want to take a peek at Frodo's "Character Analysis" for The Fellowship of the Ring for some background.

When we hear the word "hero," our minds usually jump to the stereotype—you know, any tall, muscle-bound fellow who looks ready to kick butt and take names. While Frodo Baggins may be the hero of one of the most beloved book and film franchises of all time, he does not fit that image of the classic hero. Not one bit.

See, the thing is, Frodo's great talent is invisible: he has a huge heart, and he inspires love and devotion in other people. You don't need big muscles to love the people around you, which is why Frodo gets the job done while still being short, plump, and hairy-footed.

Because the power of the Ring is to twist the ambition and bravery of bigger, more obviously heroic guys (cough—Boromir—cough) against them, it makes sense that the right guy (or the right hobbit) to fight this power is someone humble, without all of those fierce warrior skills.

Frodo may not fit our image of a clichéd hero, but he is the perfect hero for this particular quest. In fighting against a magical tool that wants Frodo to kill people to bring him further over to the Dark Side, his most heroic action is not killing Gollum when Gollum finds Frodo wandering around the Wild—even though he knows Gollum will probably betray him and Sam really wants Frodo to get rid of this treacherous sneak.

It's also worth noticing that what inspires Frodo to be merciful to Gollum is a memory of Gandalf's words in Fellowship Book One, Chapter Two. Gandalf is nowhere near Frodo at this point in the novel, but he is still the voice in Frodo's head, encouraging him to do better:

Deserves death! I daresay he does. Many that live deserve death. And some die that deserve life. Can you give that to them? Then be not too eager to deal out death in the name of justice, fearing for your own safety. Even the wise cannot see all ends.

It's pretty amazing that Frodo is capable of pitying a person who wants his Ring at any cost, who will happily kill Frodo to get it. If that's not evidence that Frodo's superpower is big-heartedness, we don't know what is. 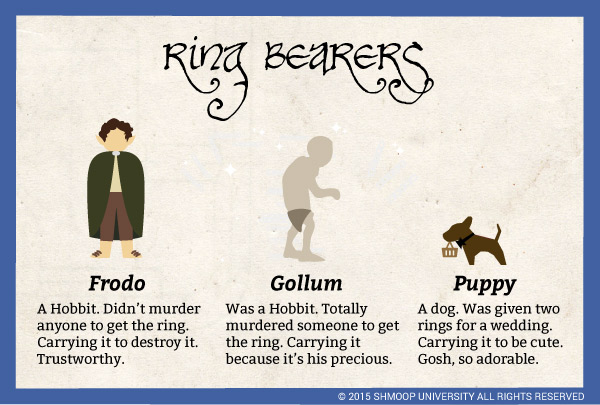 But even beyond Frodo's basic decency, we also can't forget that it's Gandalf who advises Frodo to be merciful as early as the second chapter of the whole trilogy. After all, Gandalf is Middle-earth's closest thing to an angel. He is a force for good, and he knows all kinds of things about the moral workings of the world. So if he thinks forgiveness is going to be important to the whole Ring quest, we know that we should be paying attention. The fact that Frodo remembers what Gandalf said about not being "too eager to deal out death in the name of justice," along with the fact that Tolkien thought it was important enough that it bore repeating, is proof that this just might be the moral of the whole series. Or at least one of them. And it's a moral Frodo stands for.

We won't know until the last book exactly why Frodo's decision not to slaughter Gollum in The Two Towers is so key. But we can say that Tolkien puts an awful lot of emphasis on the importance of mercy in both Fellowship and The Two Towers. After all, mercy is a way of life for Frodo, from his attempt to feed Gollum lembas bread (which Gollum can't handle; see "Symbols, Imagery, Allegory" for more on why) to Frodo's decision to save him from Faramir's men at the pool of Henneth Annûn. Suffice it to say, when it comes to Middle-earth morality, mercy matters, and Frodo has it in spades.

Here's the thing. Since Frodo isn't the kind of guy who goes around sticking swords into bad dudes or making mayhem with his manliness, sometimes it's hard to see what he is doing. We know it's hard to carry the Ring (and Gollum's wasted body and twisted mind are always there to remind us of that fact). But, at the same time, most of Frodo's struggle is internal, so we can't see it in obvious ways. He doesn't talk to himself, like Gollum does, and he doesn't exactly confess his inner-most fears to his best bud Sam. Instead, Tolkien has to invent some story twists to make it clear to us just how hard Frodo has to work to keep his mind clear of the Ring's influence.

In addition to Frodo's growing emotional distance from Sam and his physical difficulties when climbing towards Mordor and past the tower of the Ringwraiths at the end of the book (both definitely bad signs of what the Ring is doing to him), we also have Frodo's meeting with Faramir and his merry men in Ithilien to show us how painful Frodo's quest must be. There's plenty of evidence that Faramir is a better guy than his brother, Boromir; the fact that he doesn't grab the Ring from Frodo when he has the chance is pretty big proof. This makes it all the more amazing that Faramir admits that Frodo is an even tougher person than he is:

Well, Frodo, now at last we understand one another […] If you took this thing on yourself, unwilling, at another's asking, then you have pity and honour from me. And I marvel at you: to keep it hid and not to use it. (4.5.141)

Faramir fits the strong dude model of heroism much better than Frodo does. So the fact that Faramir takes the time to admire Frodo's resistance to the Ring reminds us that Frodo may not be showy about it, but he's still busy doing everything he can to save the world. Faramir "marvel[s]" at Frodo for taking the Ring and yet not using it. And if Faramir thinks Frodo is impressive, well, who are we to disagree?

Just as it seems as though Sam and Frodo are going to make it into Mordor without being spotted by their enemies, everything goes to pot. By the end of The Two Towers, Frodo has been betrayed by Gollum, poisoned by the huge spider Shelob, and captured by orcs. Sam is still free, but he is alone in all of Mordor. He has got the Ring and Frodo's small sword on his side, but truly—Sam's odds of rescuing Frodo seem, well, long.

However, the fact that The Two Towers ends with Frodo in prison and Sam out and about is a sign that Sam is going to own the next section of their Mordor adventures. As the Ring takes greater control of Frodo, it's going to fall increasingly to Sam to get things done so that Frodo can keep struggling on against the weight of the Ring. Now, Sam has a chance to develop his own heroic character; first things first, he has to rescue Frodo, to whom the worst has happened.

And that's just it. In The Two Towers, stuff happens to Frodo. Other than sparing Gollum and passing along news to Faramir, Frodo doesn't take much of a leading role, and he rarely makes a decision. Throughout the book, we see the force of the Ring slowly overcome him, while other disastrous events come his way.