Legolas in The Two Towers 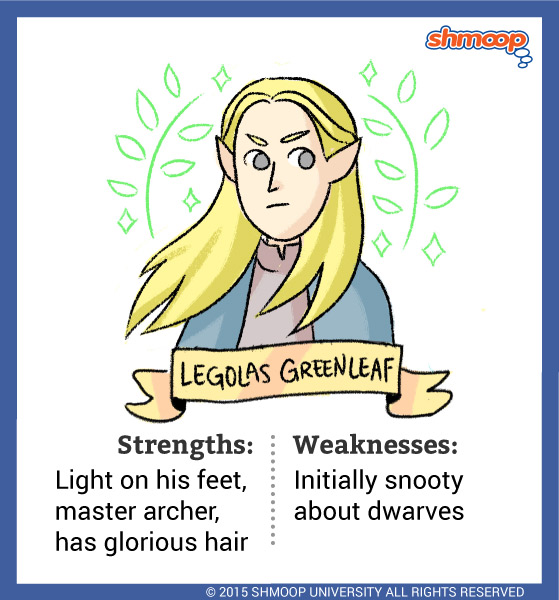 Note: Before we jump into discussing Legolas in The Two Towers, you might want to take a peek at Legolas's "Character Analysis" for The Fellowship of the Ring for some background.

Orlando Bloom may be freakishly handsome playing Legolas in the 2002 movie version of The Two Towers. Still, the fact remains (sorry, fangirls) that as a character, Legolas does not actually have a lot going on in this book.

As the elf member of the Fellowship, Legolas spends a lot of time listening to the trees of Fangorn Forest and hearing traces of their thoughts. He has a bond with the green and growing things of Middle-earth, just like his dwarf best buddy Gimli feels deeply about its stones and caverns. But Legolas doesn't particularly have a plot line of his own, beyond his Odd Couple friendship with Gimli. He's mostly a support player, backing up Aragorn and Gandalf when they need it.

Legolas does have one major thing going for him as a character. He makes this whole elves-are-vanishing-from-Middle-earth subplot personal for the reader. In the background of all three of these books is this sense of tragedy: the War of the Ring is the last great battle of the elves in Middle-earth. They are fading from the world, and once this whole battle against Sauron is done, they'll all travel across the Sea, never to be seen again in Middle-earth. Which is heart-breaking, because we'd love to see some elves in this world.

Legolas has spent a long time sheltered in the forest of Mirkwood, enjoying life. But even he sees that the elves are dying out, and the next age of Middle-earth is going to be age of Man. Someday soon, he's going to have to join his elven family across the Sea (if he's not killed in battle first, that is).

Even Galadriel knows it. She sends Legolas this weird message: "Legolas Greenleaf long under tree/ In joy thou hast lived. Beware of the Sea!/ If thou hearest the cry of the gull on the shore,/ Thy heart shall then rest in the forest no more" (3.5.142). The prophecy strongly hints that Legolas's long life in the forests of Middle-earth is coming to an end. We know that Gondor borders the Sea, and Gondor is where Aragorn is heading. So Legolas will probably hear those seagulls all too soon.

Obviously, these hints of Legolas's departure from Middle-earth make us sad. Even if The Return of the King has a happy ending (and we're not promising anything—you'll have to read it to find out), we know the conclusion of this trilogy cannot be entirely, 100% positive. How can it be totally happy, if Legolas and all of his relatives are eventually going to have to ditch Middle-earth to leave this world to mankind? Tolkien obviously knows that a war of this size has consequences, even if the Good side wins. In part, Legolas gives a face and a name to the elves' sacrifice for Middle-earth.