Saruman in The Two Towers 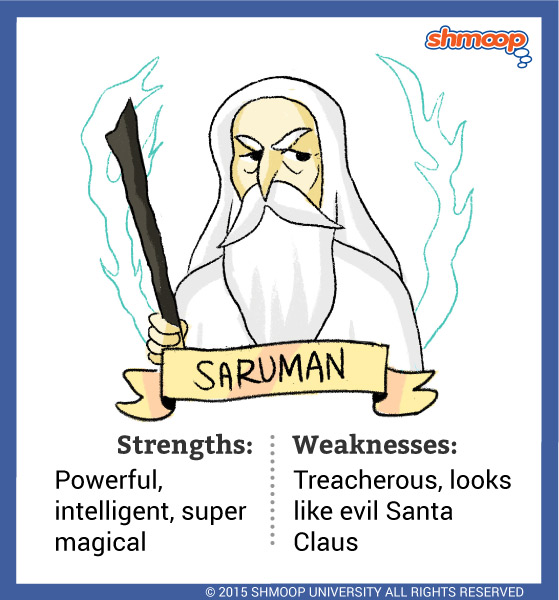 Note: Before we jump into discussing Saruman in The Two Towers, you might want to take a peek at Saruman's "Character Analysis" for The Fellowship of the Ring for some background.

So, you know how, back in the Gandalf "Character Analysis," we kept going on and on about how Gandalf is Middle-earth's version of an angel (with a lot more beard and a lot fewer wings than usual)? Well, this raises a question: Saruman's a wizard. In fact, he used to be the leader of Gandalf's wizarding club, the Council of the Wise. So is Saruman an angel, too? Or, given that he's the main Bad Guy in The Two Towers, is he a fallen angel?

We don't think so. Sure, Saruman may have had the potential to be a bit more angelic than he actually is in these books, what with being a great wizard and all. But for Gandalf to come into his own as Gandalf-the-White-Bearer-of-the-Elf-Ring-Narya-and-All-Around-Hero-on-the-Side-of-Good, Gandalf has to die. And he has to die willingly, knowing that he's giving up his own existence to save others. It's only when Gandalf proves that he's willing to sacrifice his life for the cause of Good that he gets reborn as Gandalf the Angel.

Saruman would never in a million years give up his life for another person. He's too arrogant and proud to have any faith in forces larger than himself. And he's way too greedy and ambitious to just let his own life go; he wants to rule and to conquer. That's all there is to it. So Saruman never has the chance to become an angel. He simply doesn't have the wisdom for it.

The Lesser of Two Evils

Here's another way to look at it: Saruman is basically a mini-Sauron. He's got all of Sauron's major character flaws, but he's even more pathetic. Saruman wants to hide behind Sauron, manipulating the Big Bad to get even more power for himself, until Saruman can finally make a play for the Ring. He doesn't even have the courage to conquer in his own name; he has to use Sauron's position and influence to gain more power for himself. Needless to say, he never even comes close to capturing the One Ring, though his orcs do snag Merry and Pippin in the hopes that one of them might be the Ring-bearer. (Nice try, dudes, but no dice.)

Since Saruman is basically just a puppet of Sauron's, we don't see much of him in this novel. He doesn't have a lot of character depth. In video game terms, Saruman is the boss of this level: our guys just have to get through him so that they can reach the next stage of the game in The Return of the King to fight Sauron, the Biggest Bad of them all. Even so, there are two cool things about Saruman's evilness that we want to bring up:

Tolkien may have been writing way back in the 1940s and 50s, but The Two Towers has a pro-environmental message that rings just as relevant on Earth Day 2012. Tolkien hated the fact that factories were chewing up the forests and polluting the green landscape of Ye Merry Olde Englande in his day.

The Shire is a symbol of the beauty and calm of green village life. And all of Saruman's evil work cutting down the forests and hurting the Ents is a clear criticism of modern-day abuse of the environment. Think about it: if Saruman had been a wee bit more respectful of the forests and of nature, then maybe Treebeard wouldn't have gotten angry enough to bring down thousands of walking trees to kick Saruman's butt and kill off his army of orcs. In Middle-earth at least, Tolkien is giving the trees themselves a chance to fight back against their polluters—now there's poetic justice.

Saruman's greatest weapon is his voice. The man has a golden set of pipes, and he can use them to convince pretty much anyone of just about anything. Even though the Good Guys have Saruman cornered in Orthanc by the end of Book Three of The Two Towers, he can still talk. And that makes him dangerous.

As Saruman argues with Gandalf in front of the whole army of Rohan (who have just come from fighting Saruman's own orcs, remember), they start to think maybe Saruman's right—maybe Gandalf is being unfair and Saruman has been wrongly locked up. Think about the kind of power it would take to convince you that the guy you just locked in a tower for using orcs to kill whole families should be released. Obviously, Saruman's voice is bad news.

Gandalf overcomes Saruman's magic voice by snapping his wizard's staff and revoking his membership in the White Council (another name for the Council of the Wise, Gandalf's wizarding group). But while Saruman is still in prison by the end of The Two Towers, he's not actually dead. We can't help but suspect that we'll hear Saruman's voice again before the trilogy is done.