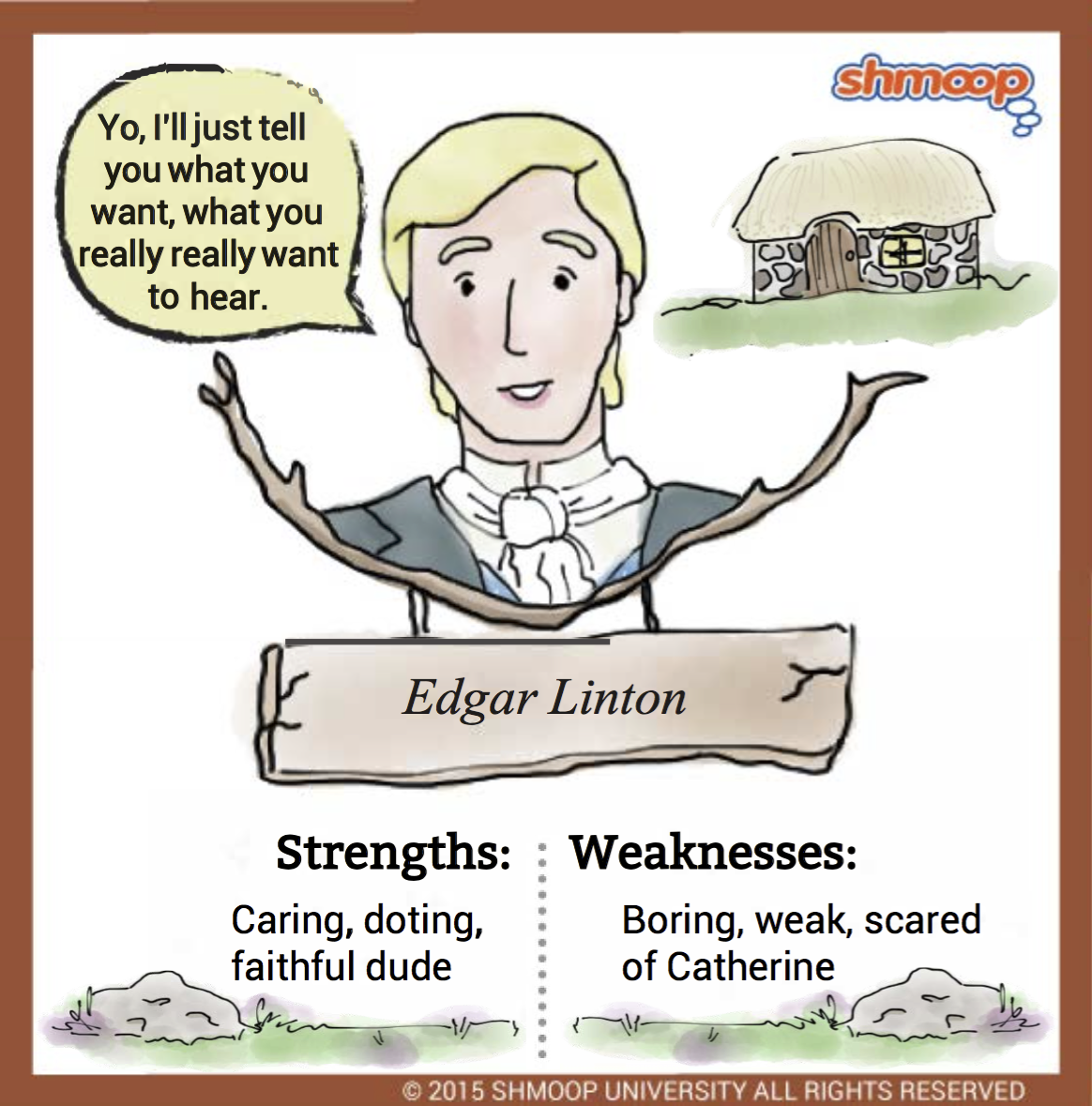 We're going to take this moment to direct you to an on-the-nose comic by awesome Kate Beaton. Check it out, then come back to us.

Poor Edgar Linton is not the type to be dude-watched by either Charlotte or Emily. He's not passionate, mysterious, or brooding. Or—from Anne's reasonable perspective—he's not an alcoholic or a jerky dirtbag.

Edgar is basically a decent and faithful guy... which for purposes of the story makes him a little boring. He is in essence, appearance, and stature Heathcliff's opposite; with "light hair and a fair skin" (7.41), Edgar is well-dressed, well-behaved, and rich. Living a pampered life down at Thrushcross Grange, Edgar really doesn't have much to worry about. The first time we see him he is weeping over a puppy, which naturally makes him a big ninny in Heathcliff's eyes. Aww.

But, to be fair, Edgar's hardly a saint. For one, his attitude toward Heathcliff is one of extreme superiority.

To Catherine he's a blue-eyed golden boy who represents a chance for social elevation. After all, he's rich, a gentleman, a magistrate, and willing to pamper and adore her. Edgar seems to have a masochistic streak, since he falls incurably in love with Catherine after she acts like a huge brat to the servants and hits him. As Nelly puts it, "he possessed the power to depart as much as a cat possesses the power to leave a mouse half killed, or a bird half eaten" (8. 87). Ouch!

Edgar basically walks on eggshells around Catherine while Heathcliff continues to obsess about her. According to Nelly, Edgar displays "a deep-rooted fear of ruffling her [Catherine's] humour" (10.13). In typical fashion, Catherine comes to resent his patience, seeing him as lily-livered compared to the fiercely passionate Heathcliff.

In the end, Edgar comes across as sympathetic and compassionate, if weak and a little gullible. Disowning his sister, Isabella, for marrying Heathcliff doesn't earn him any points in our eyes, and he seems like a chump for believing Cathy's marriage to Linton Heathcliff could actually work.