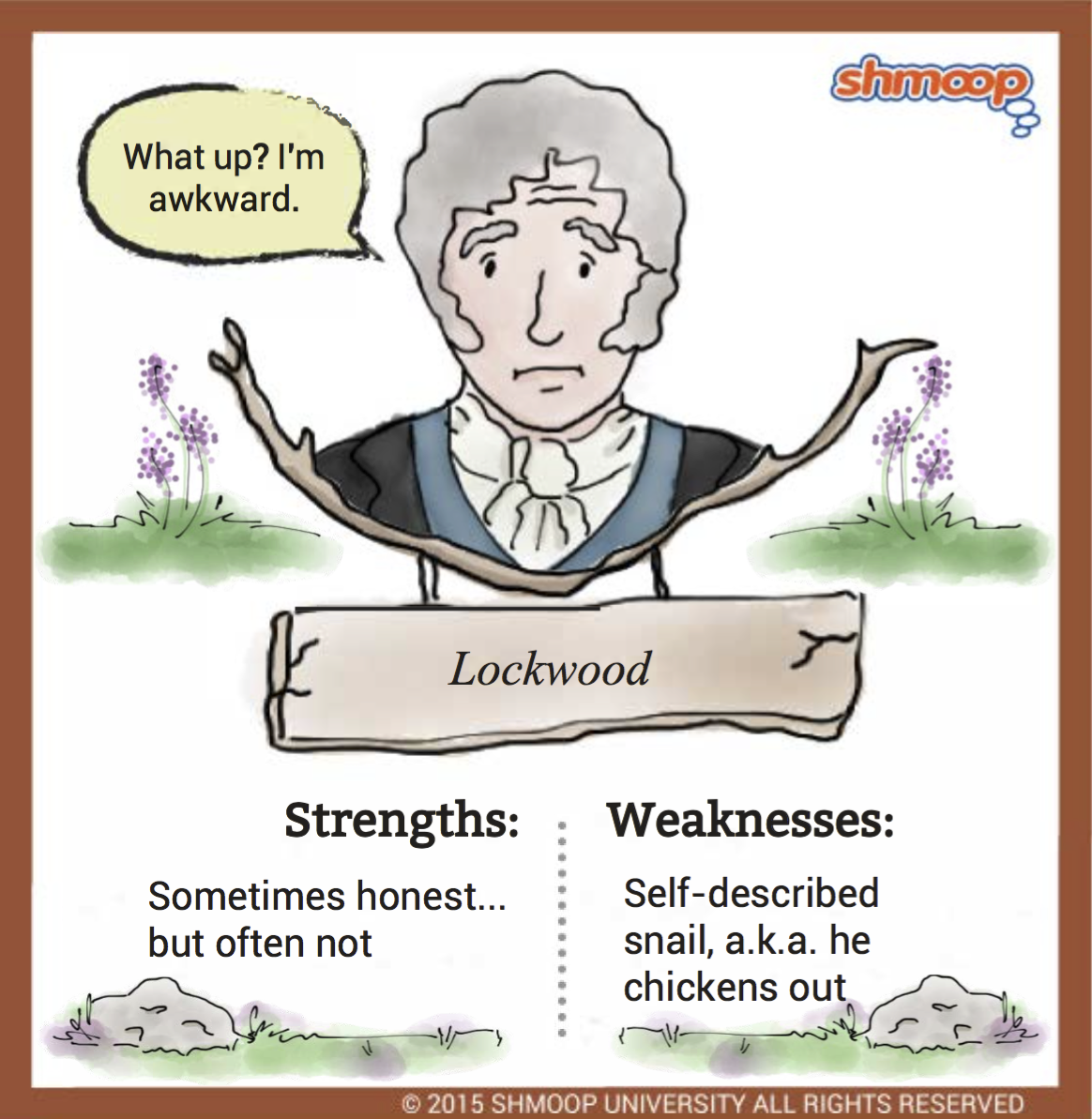 Lockwood is our primary narrator, but if you read closely, you can see that his judgment of a situation can be a little... off. We soon realize that we will have to be careful about how we interpret this blundering, unreliable agent of information.

From the very beginning, his whole interaction with Heathcliff's dogs (the "hive" of "four-footed fiends" [2.24]) and his mistaken assumptions about who is who in Wuthering Heights reveal him to be something of a bumbler. As a narrator, he is here to tell us what he sees, but also to introduce themes of violation, confusion, and dislocation. (See our "Symbolism, Imagery, Allegory" section.) After all, his name does suggest a locked door, a reality he faces several times—both literally and metaphorically. He pretty quickly begins to feel "out of place in that pleasant family circle" and clues the reader in that this mixed family unit is no Brady Bunch.

We never know much about Lockwood personally. He does confide to the reader his impulse to "shrink icily into [himself] like a snail" in response to uncomfortable situations (1.16), and we know he chickened out of a relationship with some fine young thing at a seaside vacation town. To know anything about Lockwood, we must either compare his own interpretations with ours (which is hard, since he is our source of information) or evaluate the few actions in which he participates.

One prominent example: Lockwood's response to Catherine's persistent ghost at the window during his eerie night in the oak-paneled bed:

Terror made me cruel; and, finding it useless to attempt shaking the creature off, I pulled its wrist on to the broken pane, and rubbed it to and fro till the blood ran down and soaked the bed-clothes: still it wailed [. . .]. (3.50)

Brutal treatment or quick thinking? Either way, Lockwood seems to be no stranger to violence. He will spend the remainder of the novel trying to comprehend what this scene says about the inhabitants (dead and alive) of Wuthering Heights—and yet he never refers to it again. His cluelessness is confirmed by his return the next day, when he finds himself unable to navigate the moors. Perhaps Brontë is telling us that Lockwood is not good at negotiating confusing situations. And let's not forget Lockwood's absurd presumptions about romantic possibilities with Cathy. Really?!