At times, it seemed that getting through Algebra was like living in a horror movie. Polynomials, functions, and systems of equations were all out to get us, and it felt like all we could do was run away until the dramatic showdown at the end. But we bested the last test and survived to live another day. 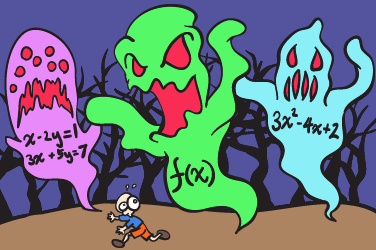 Well, now we've been cast into the sequel, Algebra 2: Electric Boogaloo. That doesn't sound like the title of a horror movie, though, and with Shmoop's help it won't be. To start off, we'll take it easy with a review of some Algebra basics. Don't worry, the gang's mellowed out a bit with age.

Then we'll dig deeper into linear inequalities, solving their equations and helping them with their teamwork. The absolute value makes a surprise return with equations and inequalities of its own. We'll cap things off with some word problems. But hey, no worries, we've worked out a detailed strategy that will make them word no-problems instead.

Basic Mathematics—Algebra Word Problems
If you've got a hankering to study more word problems and see how they are solved, this is the link for you.

Purplemath—Solving Linear Inequalities: Introduction and Formatting
Inequalities making you feel like a less-than-stellar student? Want to be greater than you've ever been before at solving linear inequalities? Purplemath is a Shmoop-approved resource for reaching your full potential.

Baby Got Flipped—Inequalities
Don't get mixed up when multiplying or dividing by negative numbers in an inequality. Instead, Mix-A-Lot by flipping those signs around while listening to this quick rap.

Videojug Education—How to Interpret Hard Word Problems in Algebra
How come we always have to translate from words into math? Why not start with an equation, and have us come up with a story about it? That would be a lot easier, and more fun. While we try to convince teachers to try that kind of problem out, here's a tutorial on working through word problems.

CRCT Lessons—Absolute Value Equations Game
Someday, someone might offer you a million dollars if you can answer 12 questions about absolute value equations. Use this quiz to practice for that day.

Quia—Solving Compound Inequalities
Another chance at a million dollars, this time for solving compound inequalities? Our chances of getting rich keep going up.

Quia—Solving Absolute Value Equations and Inequalities
Jeopardy and math go together like Bigfoot and conditioner: they should hang out together more often.

Next
More on Equations and Inequalities Navigation