We've prepared our fish by cutting it into flat rectangular portions and diced our vegetables into thin slices. We've even gone off on a tangent, playing with frisbees and toilet paper tubes. We're hungry for a gourmet fish supper, but it'll be bland without any seasoning.

That's where this section comes in handy. Spices and herbs come in long strings that we need to chop. These long lines, called arcs, are written using a couple different methods, some of which we'll discuss below. We'll learn how to chop them up to find how much we have before we add them to our boiling pot.

The first thing we need to know is the length of a line. We used it for triangles, we used it for circles, and we even used it to find areas on disks. Who knew Pythagorus would be on to something when came up with the Pythagorean Theorem? Well...he probably did.

These problems are just a short review of how to use his theorem. If you have any trouble with them, you should review the Pythagorean Theorem and then come back.

Find the length of the line between

When an herb is shaped like a curve (or arc) instead of a straight line, the length of the curve or arc length is the length of a piece of string that exactly covers the curve.

The idea of the string is good intuition, but it's not very useful for doing problems. Instead, like the other problems we've done in this unit to find area and volume, we are going to break our arc length problems down into parts. To find the length of the curve of a continuous function f on an interval [a,b],

Most of the assumptions we made earlier still apply if we replace "area" with "length." The exception is the first assumption, since there aren't "horizontal" or "vertical" slices when we're only working in one dimension.

We're going to use the Pythagorean Theorem a lot more in this section, albeit a little differently than we have before. For a sample function f(x) on an interval [a,b], 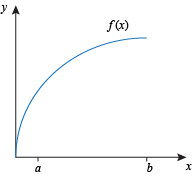 we'll chop the curve up into tiny pieces and zoom in on the piece at position x. We want to be careful that the sun isn't shining too brightly. We aren't trying to kill a bug with a magnifying glass. 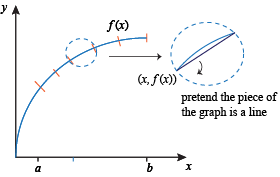 If we rearrange this equation, we get

We add up these quantities and let the number of pieces approach ∞ to get an integral that gives us the exact length of the curve. The integral is from a to b since those are the values that make sense for x.

We can't really make these problems any harder. We just need to remember

to find the length of a curve. If we were to forget the formula, it's not the zombie apocalypse. We could just draw a picture that breaks the curve up into pieces and use the Pythagorean Theorem to find the length of a piece. Then we'd just go through the steps we just used above to reconstruct the formula. We recommend practicing this a few times before the test. Memorizing a formula is one thing, but actually understanding it is another.