We need to learn to slice flat food first. After it's been de-boned, a fish such as salmon is relatively flat.

If we're planning on making fish sticks (we totally are), we'll need to cut that salmon into thin strips. We slice the fish from top to bottom into nice, even strips. We want them even so the 5-year-olds don't get into a fight at the dinner table.

We do the same thing when we break the area under a curve up into rectangular strips. We can use a left-hand sum to approximate the definite integral of a non-negative function.

If we want to approximate

where "f" stands for fish, we have to know the function f(x) and the interval [a,b]:

We slice up the region between the function and the x-axis into n slices. Each slice has the same width, Δ x: 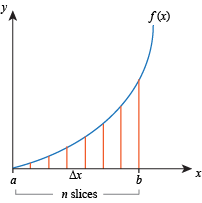 Look at the slice whose left endpoint is at coordinate x: 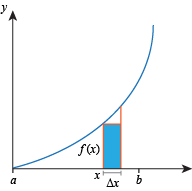 The area of this slice is approximately the same as the area of the rectangle with width Δ x and height f(x).

The area of the rectangle is

To approximate the area between f(x) and the x axis on [a,b], we add up the areas of all n rectangles.

If we take the limit of the sum as the number of rectangles n approaches ∞, the intervals Δ x get really small. We get the exact area between f(x) and the x-axis on [a,b]:

In other words, a definite integral is a sum in the limit that we sum over an infinite number of intervals.

We're slicing the region into infinitely many slices of infinitesimal width.

We use dx instead of Δ x for the infinitesimal width because the "change in x" is too small to measure.

Here are a couple review examples to remind us of how to slice areas into vertical intervals.

Our general plan of attack for these problems is pretty straightforward.

1) Figure out the region whose area you're finding. Catch a fish.

2) Slice up the region into strips and find the approximate area of each strip. Make fish sticks.

3) Add up all the approximate areas and take the limit as the number of strips goes to ∞ to get an integral that gives the exact area of the region. Eat an infinite number of fish sticks.

We need to be careful here. While following this plan of attack, there are a few things we need to keep in mind.

We should make sure that we know the region whose area we're finding.

For example, the area of the region between the graph of y = x2 and the line y = 1 is this: 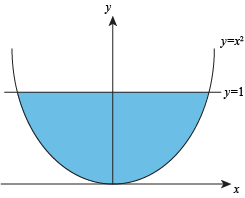 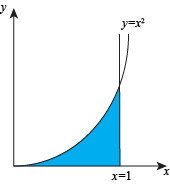 If we don't start with the correct region, we won't find the correct area. It's like trying to find the size of an apple by weighing an elephant. As a first step, it's useful to draw a picture of the region.

We should make sure to know which way we're slicing the region and what our variable of integration means. 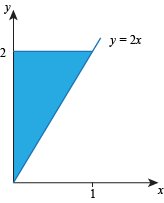 If we slice vertically and integrate with respect to x, the limits of integration are 0 to 1 because those are the values that make sense for x. We end up with an integral

If we slice horizontally and integrate with respect to y, then the limits of integration are 0 to 2 because those are the values that make sense for y. In this case, we end up with an integral