Area, Volume, and Arc Length - Volume of Solids of Revolution

Volume of Solids of Revolution

Solids of revolution aren't fruits thrown at tyrannical rulers in protest. A solid of revolution is a 3D object built by rotating an area around a predetermined center line called the axis of rotation.

We mentioned before that one way to think of this is as a bundt cake. If we aren't happy with a thin slice, we can choose a thicker piece by making an initial slice and rotating the knife around the center to cut out a better sized portion. If we were to rotate all the way around once without cutting, we would form the entire cake, which is a full revolution of the solid cake.

Draw the solid obtained by rotating the region bounded by y = x, y = 1, and the y-axis around the y-axis.

As always, we'll start by drawing the area we are going to make the volume with: 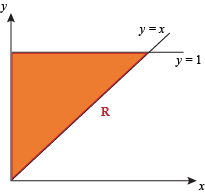 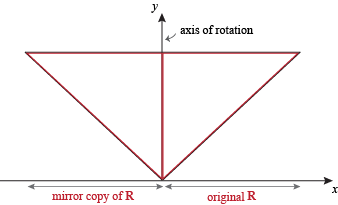 Next, we draw curved lines, solid in front and dotted in back, to make it look like the region went all the way around the y-axis: This will usually be good enough to give you an idea of what the solid looks like. In this case we ended up with a cone, but different regions and different axes of rotation will produce radically different solids.