So far, we've been looking at areas of triangles and rectangles and trapezoids. Shapes with straight edges and angles and corners. Well, it was fun while it lasted, but we're done with all that business. Time to get a little less square and a little more well-rounded.

A circle doesn't have any straight lines. It's just a never-ending curve that goes around and around. That being the case, there's no such thing as a base and height. They just don't exist for circles. But if they don't exist, how can we find the area of a circle? Nooo!

Okay, so it isn't that terrible. If we don't have a base and a height, what do we have to work with? As we know, a circle is described by its radius r, which is the distance from the center of the circle to its edge.

As it turns out, the area of a circle can be given by the formula A = πr2, where r is the radius and π is the never-ending irrational number that we can estimate as 3.14. We wish it were key lime, but that might just be too much to hope for.

After all, pies are round, but pi r squared.

What is the area of a circle with a radius of 3 cm?

A ship malfunction causes a circular oil spill that covers 4.52 square miles of the ocean. What is the length across the entire oil spill?

Even in unfortunate situations such as these, we can still use the formula A = πr2 when dealing with the area of a circle.

Since the radius is the distance from the edge to the center, we need to multiply it by 2 so that it reaches from one side of the oil spill to the other. The distance across the entire oil spill is 2 × 1.2 miles = 2.4 miles.

In addition to the radius, another term to describe a circle is the diameter d, which is twice the length of the radius. The diameter goes all the way across the circle, through its center, kind of like a belt. But you knew that. 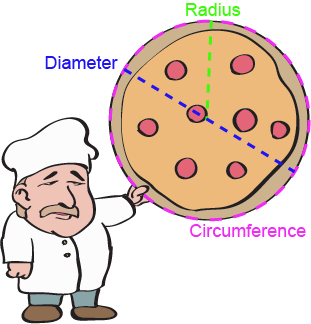 Aliens have arrived! You could've sworn you heard a weird humming during the night and some strange chatter outside. Sure enough, they've made a mark on your farm in the form of a crop circle with a diameter of exactly 6 kilometers. What is the area of the crop circle?

Previous Next
More on Area Navigation